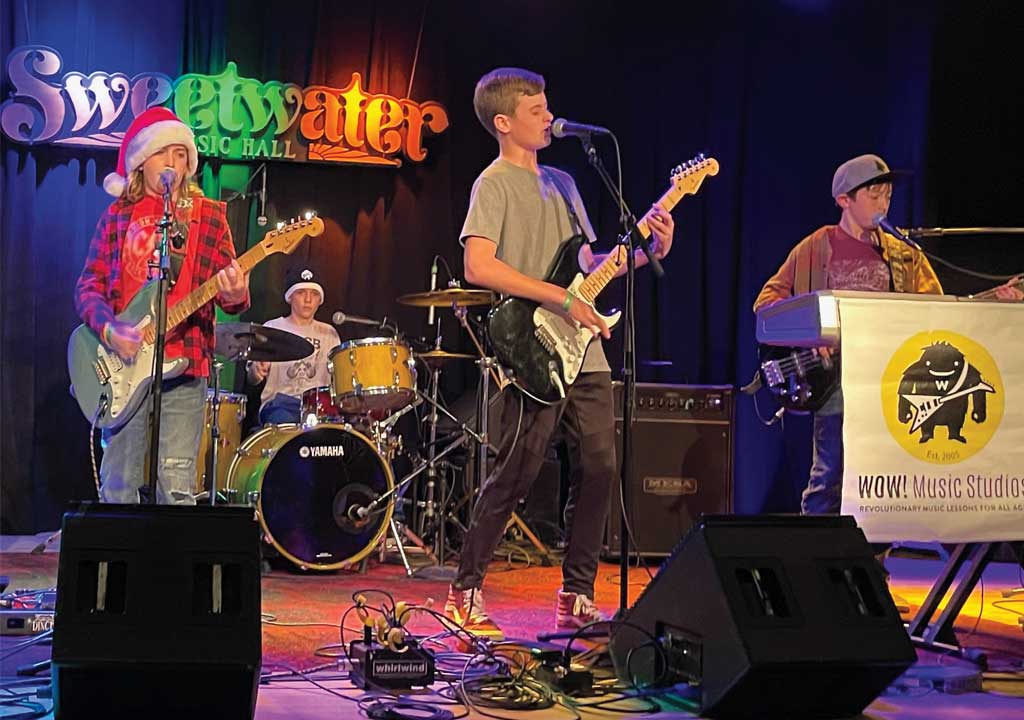 After years of working in advertising the endlessly cheerful husband-and-wife team of Tommy Toy and Emily Siskin-Toy wanted to transform their daughter’s home-taught piano lessons into something they could share with other kids. So, they formed a teaching studio and by the end of their first year in 2015 had already enrolled 80 eager students.

“We jumped out of the corporate rat race because the world doesn’t need more laundry detergent — we need more music,” Tommy says about starting WOW! Music Studios in Emily’s hometown of Mill Valley. “We decided to do something we were much more passionate about.”

One reason the studio has been so successful, relocating to a larger space, adding more instruments to the class list and 18 teachers, can be traced to the method used. Tommy believes that everyone is naturally musical — you can walk and chew gum, that’s rhythm; you understand the difference in speech between someone from New York and someone from Texas, that’s tone — and the best way to get to that musicality is to hold off on learning to read music and just start playing.

“For 300 years reading music has been the standard and it’s part of the reason why the failure rate is so high. It’s the same as asking students to read in order to speak and no one would ever advocate that,” he says. “It’s amazing how quickly they take off because there is nothing encumbering them. And later when you show them the sheet music for what they have been playing, the lightbulb goes on a lot faster.”

The couple says that the final ingredient to their success came when they started encouraging kids to form bands. And last year they partnered with Sweetwater Music Hall’s nonprofit arm and started letting the kids take their bands onstage several times a year. “We started realizing these kids, oh my gosh, they’re moving so fast and suddenly we’ve got bands forming,” Tommy says. “After these performances the kids come off the stage and they’re just buzzing with energy and all their friends are coming up and congratulating them — it’s a huge inspiration.”

Emily adds that there is another benefit to forming musical partnerships — it encourages kids to stick with music even after they reach an age where they might otherwise quit. “When they get to middle school and high school age, they really want to be social and be with their friends and play music in a setting where they’re sharing it,” she says, adding that this is hopefully building the next generation of stewards for venues like Sweetwater.

“They are working with other people and writing songs or covering songs together and the bonding in some of these bands is incredible.”

The latest evolution of the studio happened serendipitously. The couple had always wanted to start a program for special needs children and when they searched for one, they didn’t have to look any farther than right next door.

Their neighbors at The Helix School  were eager to introduce music classes to their autistic and neurodiverse students ranging in age from 5 to 22 and Tommy had just the program for them and something more — eager support from Sweetwater’s nonprofit as well.

“He found a way for everyone to participate and they’re doing something as a group that their neurotypical peers are doing,” says Helix executive director Kristin Schinella, Ph.D., adding that the students are always asking when “music day” is and that it is a class nobody wants to miss. “Music is something you really feel, and they feel it, whether it’s a beat or a particular instrument they are interested in — they get that sensation.”

And the ultimate fruition of this three-way partnership will occur at the end of the year with a special fundraising concert — likely featuring a notable “opening band” followed by a headlining performance of a band of students from The Helix School (although exact details are still being worked out) at Sweetwater.

“For the parents of these kids and for the kids themselves, never in a million years did they believe that they were going to have an opportunity to play at an amazing venue like Sweetwater,” Tommy says. “Everyone is just over-the-moon excited about this.”