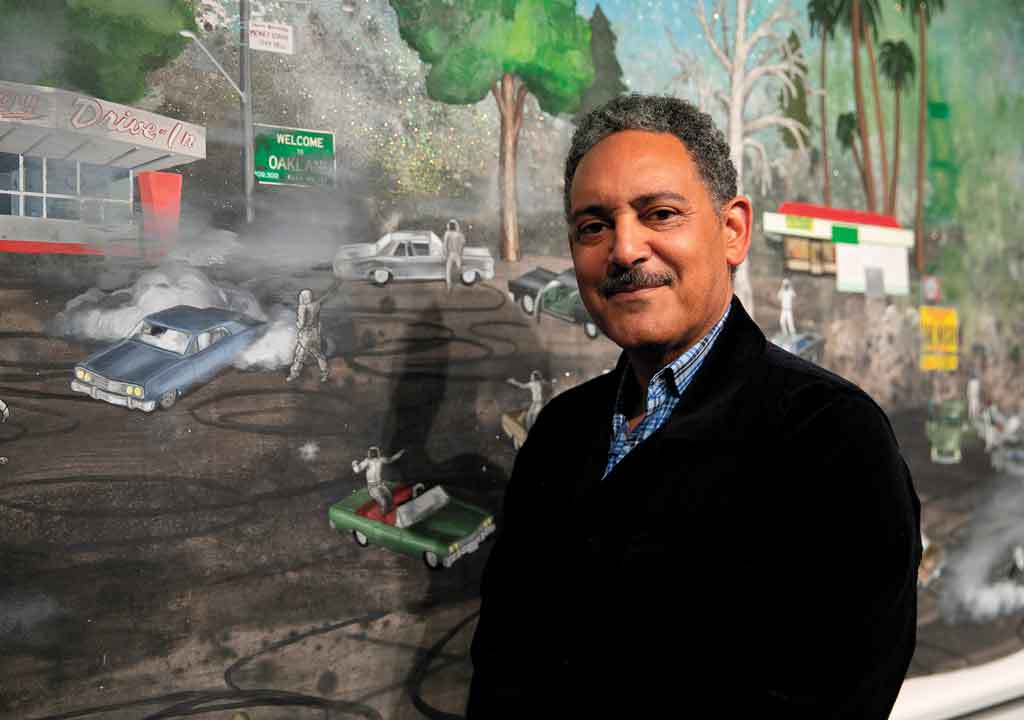 You might have walked right past the Museum of the African Diaspora (MoAD) the last time you visited SFMOMA, because it’s just around the corner at Third and Mission. With only a handful of galleries on three floors, MoAD is tiny compared to its imposing and prestigious neighbor, but the Smithsonian Affiliate museum is worth a look to immerse yourself in the perspectives of African Diaspora artists.

As you stroll past MoAD today, a reproduction of a David Huffman “traumanaut” painting on the glass exterior may stop you midstride. Political statement, color, whimsy and a palpable cartoonish energy (derived from Huffman’s lifelong love for cartoons and anime) inform much of his work; dozens of his paintings and sculptures fill two MoAD galleries. His Terra Incognita exhibition, the first museum survey of his “Traumanaut” series, is on display through September 18.

Traumanauts, a blend of “trauma” and “astronauts,” are Black men and women in spacesuits who explore Earth and beyond. “They represent the trauma of African Americans as they have tried to find themselves after slavery interrupted their identity and sense of connection,” the Oakland artist explains. “They are rediscovering who they are through their interactions with the narratives in the paintings.”

In a way, it’s also his journey. His mother, a co-founder of Black Strike for Justice in 1968 and a friend of Black Panthers co-founder Bobby Seale, began taking him every week to picket against racist hiring practices and police brutality by the time he was in kindergarten. “Growing up in an activist household in Berkeley during the era of the Panthers and the civil rights and free speech movements let me see the world through a sociopolitical lens,” he says. But he was also drawn to comics, art, Star Trek and dystopian sci-fi — and in later years, the storytelling qualities of Japanese screen painting, Chinese court painting and African American neo-expressionist Robert Colescott’s art.

The traumanauts he has painted (and sculpted as ceramic figures and in a life-size traumanaut on display) are seen in highly charged and often surrealistic settings. Sometimes heroic, sometimes robotic, sometimes traumatized, they encounter everything from natural catastrophes (the powerful “Katrina Katrina, Girl You’re on My Mind”) to a chaotic but joyous sideshow in Huffman’s hometown of Oakland (“Sideshow”). “The connection between African Americans and astronauts,” Huffman notes, “is that both face trauma — the trauma of being brought to an alien, hostile place as slaves or the trauma of being in the alien, hostile environment of space.”

A paradoxical brew of joy and sadness pervades Huffman’s art. The sadness is most evident in “Katrina Katrina, Girl You’re on My Mind,” which shows traumanauts slogging through the floodwaters of New Orleans and helplessly gesturing for help on rooftops. In “Tightrope,” a traumanaut climbs a rope ladder to a cloud where others are meditating. Joy shines through in “Sideshow” and in basketball-themed paintings (not featuring traumanauts), including a permanent display at SFMOMA and his installation “Rise” at Chase Center.