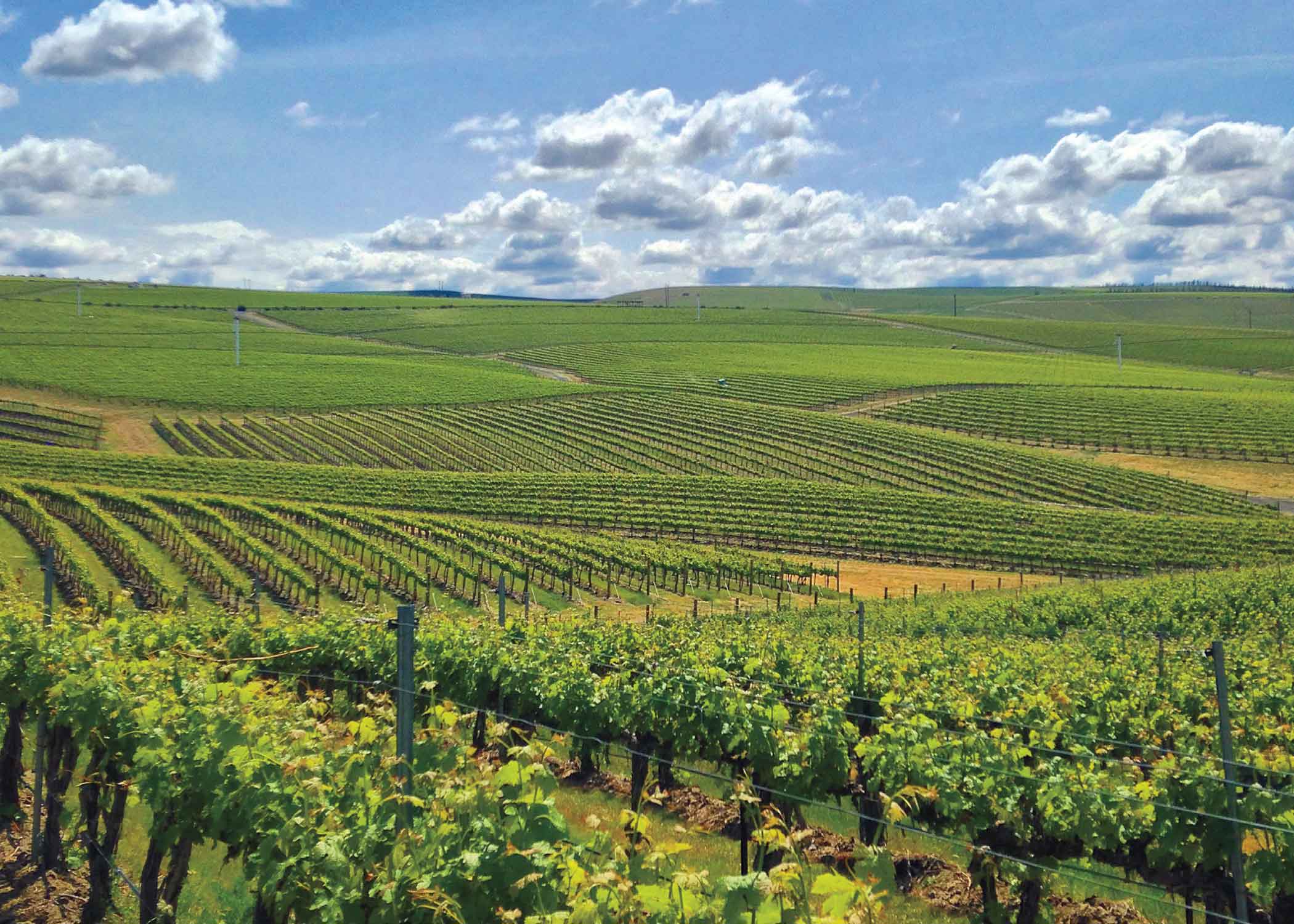 The Walla Walla Valley and the town of Walla Walla are not conveniently located next to any big city. It’s a four-hour drive from Portland and slightly longer from Seattle, but the isolation is part of the charm. The fertile countryside with golden rolling wheat fields and a downtown Main Street lined with family-owned businesses feel like a time capsule. Daily one-hour flights from SEA have made it possible for travelers to get to Walla Walla without much difficulty and the region has changed tremendously since the Walla Walla American Viticultural Area was established in 1984. (The history of winemaking in the region actually dates back to French Canadians who settled in the Eastern Washington valley in the early 1800s.) Walla Walla has become known more for refined and robust Bordeaux varietals like cabernet sauvignon and syrah than Walla Walla sweet onions. Celebrity-owned wineries and luxury resorts dot the countryside while swanky tasting rooms and chef-driven restaurants are mixed in with the funkier vintage shops and bookstores.

Fun fact, a gold rush helped make Walla Walla the largest city west of Minneapolis and north of San Francisco for a few years in the late 1800s, and it enjoys more grand and eclectic architecture than towns of similar size. Don’t miss ogling the white terra-cotta and red roof Liberty Theatre downtown.

Visit Walla Walla (which means “many waters”) in the fall when the vines are heavy with ripe fruit, and the summer’s sizzling temperatures and tourists are gone, and it’s easy to understand why an entertainer once proclaimed Walla Walla “the town so nice they named it twice.”

Walla Walla’s most recognizable landmark, the stately 1920s-era Marcus Whitman Hotel (from $154), is a classic and central place to stay. (If you stay here, we recommend requesting a room in the old tower where guest suites have unobstructed views of downtown and the countryside beyond.) In the last five years, an influx of new hotels, including wine country resorts and modern stays in the heart of town, have expanded travelers’ options.

The owners of the new FINCH hotel (from $159), in between downtown Walla Walla and Whitman College, reinvented the 1967 motel’s Streamline-era architecture with black-and-white wall paintings by regional artists in guest rooms and multiple communal spaces like an outdoor fireplace, pétanque court and an area for food carts. Each morning, staff members serve complimentary coffee from Walla Walla’s Livit Coffee Co. and pastries in the lofty adventure-themed lobby.

Founded by the owner and winemaker of Va Piano Vineyards, The Eritage Resort (from $369) on 300 bucolic acres, brought a new level of luxury to Walla Walla when it opened in 2017. Ten luxury suites and 10 lakeside bungalows have views of the Blue Mountains and manicured vineyards and features like fireplaces, private decks and patios, as well as king beds with Garnier-Thiebaut linens. Executive chef Sierra Grden leads an all-female kitchen staff and showcases the best local ingredients from family-run farms in dishes like dandelion flower fritters and Jidori chicken with apricot cream.

Abeja (from $514 a night with a two-night minimum), a working winery and 100-year-old farmstead-turned–luxury-inn (only children over the age of 13 can be accommodated), offers the valley’s most immersive wine country experience. Suites are located in farmhouse buildings, including a chicken coop and carriage house. The Kitchen at Abeja, which opened in July, celebrates the bounty of the Pacific Northwest through five- or seven-course prix fixe menus. Executive chef Elodie Li spent two years cooking in Michelin two-star restaurants in Provence, France, before returning to her home state. Abeja’s wines, created by talented husband-and-wife winemakers, include an elegant cab franc with flavors of huckleberry and cigar and a citrusy chardonnay.

Larger groups should look into the Yellowhawk Resort (from $425 a night). Eventually, it will be developed into a bigger resort with cottages, but accommodations at the moment include an eight-bedroom Estate House and a Pool House that can sleep four. Those who want to visit for the day can reserve cabanas next to the sparkling hilltop pool for wine tasting, lunch or relaxing. The resort’s winery specializes in bubbles like a sparkling sémillon.

A former cigar bar, the excellent Italian restaurant Passatempo Taverna boasts a chic industrial indoor space and a bamboo-lined patio. Order a pile of prosciutto with local cantaloupe, any handmade pasta on offer, like saffron-accented casarecce puttanesca, and the slightly spicy mozzarella pizza (chefs make the dough with flour from a local farm) washed down with a seasonal cocktail or a glass of peppery local tempranillo.

On W. Main Street, Saffron Mediterranean Kitchen is a little way outside of the heart of downtown, but worth the walk. Italian and Spanish fusion, the menu is a mix of tapas, constantly changing flatbreads, pasta and entrees like adobo-marinated hanger steak with almond-and- caperberry salsa.

Once located in a working gas station, AK’s Mercado has relocated to more rarefied digs on Main Street, but the mouthwatering dishes inspired by chef Andrae Bopp’s love for Oaxaca and New Orleans, including tacos, smoked meats and other street food, remains.

Where to Taste and What to Do

One of Walla Walla’s pioneering wineries, L’Ecole 41, was founded in 1983. It still makes some of Walla Walla’s most acclaimed wines from treasured vineyards like Seven Hills and Estate Ferguson, a high-elevation vineyard planted on a ridge of ancient lava flows. The 2017 L’Ecole 41 Estate Cabernet is savory and structured with notes of espresso and herbs. Another reason to visit is the winery’s tasting room in an early 20th-century schoolhouse with chalkboards, fir floors and ornate moldings. L’Ecole also has a wine bar in the Marcus Whitman Hotel.

Next door to the schoolhouse, another one of Walla Walla’s original wineries, Woodward Canyon, is worth a visit for age-worthy cabs, Bordeaux blends, merlot and chardonnay. Woodward Canyon’s owners, a longtime Walla Walla farming family, established the “Artist Series” in 1992 to showcase Washington state’s finest vineyards. The 2018 iteration has notes of licorice and bitter chocolate. Woodward Canyon and L’Ecole 41 are on Highway 12 near the Frenchtown Historic Site. Stop there to learn more about the valley’s tumultuous history, which includes stories of early settlers and conflicts between cavalry officers and the native Cayuse, Palouse and Yakama tribes.

Located in an industrial area just northwest of downtown, The Walls Winery and tasting room isn’t surrounded by vineyard-covered hillsides, but the excellent wines are some of Walla Walla’s most addictive. Sample Burgundian-style whites like the 2018 lemon meringue–like McAndrew Chardonnay, well-balanced reds and the West’s most refreshing rosé. A recent renovation transformed the nondescript warehouse into a beautiful place to taste with plenty of floor-to-ceiling glass and a large patio with a pizza oven.

Walla Walla is known as the road cycling capital of Washington; the Blue Mountains nearby offer steep climbs, and paved trails run through historic neighborhoods, past wineries and over rolling hills. Allegro Cyclery rents road bikes, hybrids, cruisers and more.

Families and those in search of shade and plenty of green can head to 40-acre Pioneer Park, designed in part by the nephew of Frederick Law Olmsted (who designed New York’s Central Park). It has a duck pond, walking paths and a free-to-visit aviary housing exotic birds.