This Is How Honeybees Are Fueling the Local Economy (and Ecosystem) 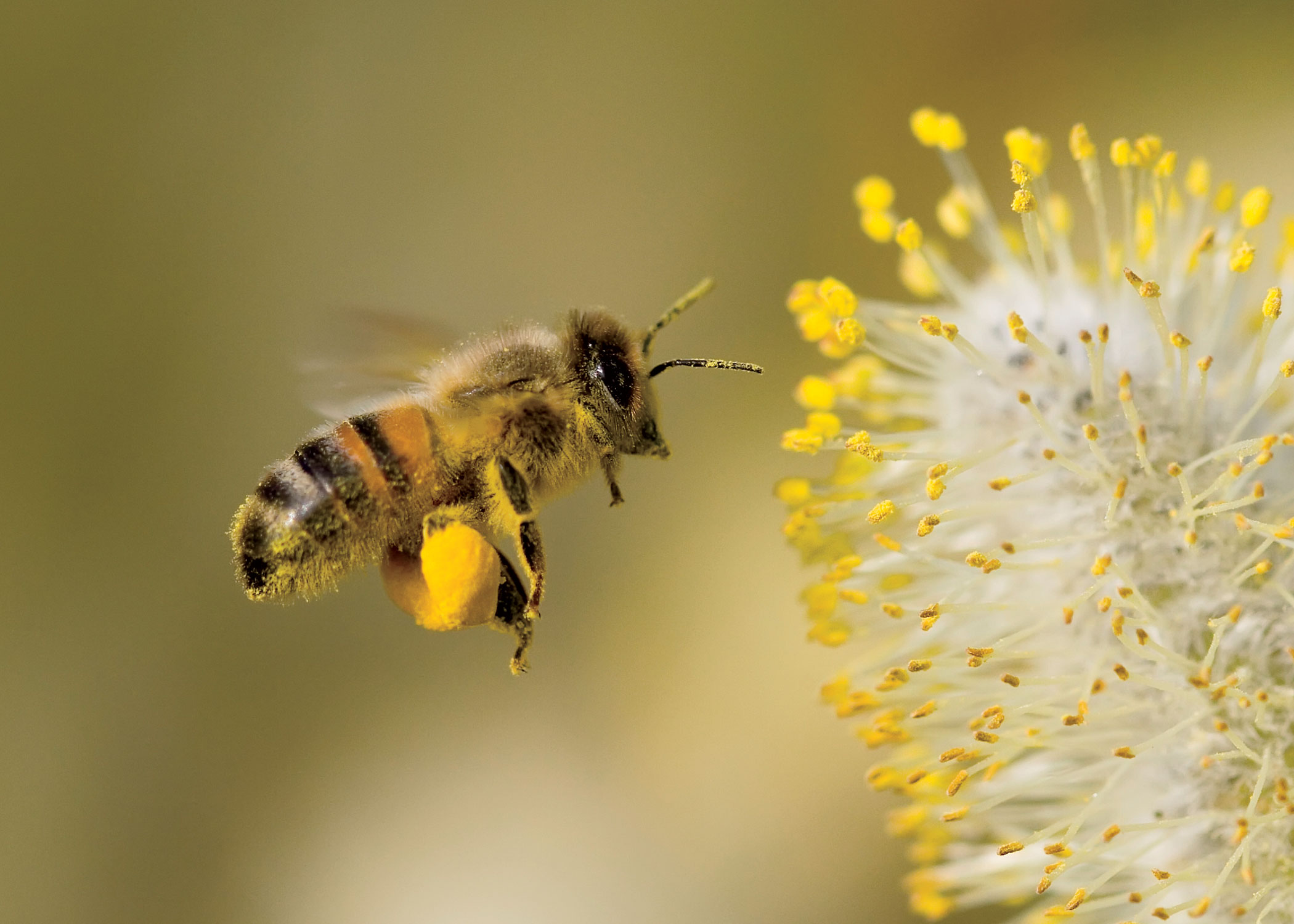 As the weather gets warmer and the days grow longer, Marin is experiencing a flowery spring awakening. From Mount Tamalpais’ hiking trails to cloistered backyard gardens, simply stepping outside reveals the abundant colors and fragrances of local wildflowers and trees in bloom. But people are not the only ones enjoying Marin’s botanical bliss; so too are the bees that harvest nectar and pollen from those flowers and trees. From this nectar, bees will produce honey infused with the unique flavors of Marin’s flora.

“Marin produces some of the best honey because there is such a variety of wildflowers … each microclimate is producing different flowers,” says Ali Trotta-Marshall, co-owner of Marshall’s Farm Honey, a Bay Area honey producer with roots in Marin. “When you take a walk on Mount Tam, you’ll see flowers in one place and then you won’t see them in another place.” As a result, if bees are in one area versus another, they will be collecting different types of pollen and nectar with a distinct composition of carbohydrates and phytochemicals, bringing distinctive tastes to their honeys.

Some 30 years ago, Marshall’s Farm founders Spencer and Helene Marshall started their honey operation in Fairfax with this knowledge. “The thing that Spencer and Helene did that other honey companies don’t do is they realized that each microclimate produced a unique honey,” and they kept those batches separate, says Trotta-Marshall. Marshall’s Farm continues to produce honey that way. The Fairfax wildflower honey, at times heavily influenced by crape myrtle, can be “like tasting a literal flower,” says Trotta-Marshall, while Mount Tam honey may take on more of a wild berry flavor given the different flora in each area. The subtle differences of local honey provide a chance to observe and sample nuances of the natural world around us.

While small-batch honeys may be widely distributed, they are pretty easy to find locally. Marshall’s Farm sells its specialty honeys at the Thursday and Sunday Marin Civic Center farmers market and on the shelves of Good Earth Natural Foods. Marshall’s Farm honey also appears at Bay Area restaurants and bars, surfacing on menus ranging from the Fairmont Hotel in San Francisco (where rooftop hives are kept) to Chez Panisse and to The French Laundry, to name a few. For some current honey-forward food and drink offerings, Farmshop at Marin Country Mart incorporates Marshall’s Farm Star Thistle honey into its Caramelized Meyer Lemon Pizza, and San Francisco-based Woods Beer & Wine Co. uses the Bay Area Blend honey in its Local Honey Herbal Ale.

For a more effervescent take on the various flavors of Marin honey, Gordon Hull, founder and meadmaker at Heidrun Meadery at Point Reyes Station, brews honey into a beverage. Mead, made by fermentation of honey, is known as a drink of medieval times, but here it is reinvented into a modern, light and refreshing Champagne-style beverage.

“The way we produce mead is very unorthodox,” says Hull. “We use the traditional method the French developed for making Champagne, but instead of fermenting grapes we are fermenting honey.”

This process, resulting in a drier (less sweet) sparkling mead, gives Hull and the team the ability to incorporate the flavors of West Marin into their different varieties. “Our focus is on trying to reveal those characteristics of the flower, and we found that by making the mead sparkling, we get as close as we can to experiencing the nectar of the flower,” Hull says.

Hull has discovered that honey from Bolinas, with its prolific eucalyptus, brings an aromatic quality to the mead. In other parts of West Marin, honey made from the nectar of coastal chaparral plants including manzanita and coyote bush “tend to be a little more herbal in flavor.” As a mead maker, Hull is tasked with bringing out the flavors harvested by honeybees in each variety ranging from Marin County wildflower to California orange, raspberry and sage blossom meads.

The Heidrun operation is even restoring some of the farm’s grassland pasture into ground for wildflower plants that produce nectar for honeybees on the property. “I’m always proudest of the Point Reyes Wildflower when we make it, partly because it’s produced from our own hives on our own property and we are doing all the beekeeping and all the flower cultivation to feed those bees,” says Hull.

Heidrun offers the opportunity (by reservation) for visitors to take a glass of the effervescent mead with them on a stroll at the farm to visit the honeybees. Visitors may also enjoy one of the featured tasting flights or simply purchase a bottle to put on ice and share at an outdoor table.

Uses of honey have been wide-ranging throughout history, and Debra Tomaszewski, founder and CEO of the skin care line Marin Bee Company, has brought the health benefits of Northern California honey to her products. Debra and her husband, Bill, began their journey in beekeeping after a move from the East Coast to Marin, initially settling in Kentfield about 20 years ago. Because of their love of gardening, the couple began beekeeping, which soon expanded into educating others about honeybees and related environmental issues. “We wanted to bring attention to the bees and respect for the earth,” says Debra. Her passion for bees first inspired her to start a nonprofit, the Planet Bee Foundation, which now delivers distance learning programs on the intriguing science of honeybees to schools nationwide.

Three years ago, she also launched the Marin Bee skin care line, partly in search of remedies for her family’s sensitive skin. “Everything was harsh, and I was like ‘I’ll just make a mask of natural products’ … I wanted a more healthy, natural experience,” she says.

After experimenting with honey and beeswax from her own hives, Debra worked with chemists to refine the formulations that have become Marin Bee, including face mask, lip repair and skin hydration products. The collection highlights Northern California wildflower honey for the beneficial enzymes, amino acids, minerals and vitamins that it naturally contains.

Beekeeping is not without its challenges. Year after year the collapse of bee colonies is a persistent and substantial concern, and climatic changes are adding extra pressures. Covid-19-related restrictions have also placed stress on the business side of local honey-based operations that strongly depend on relationships with retailers and restaurants to reach customers.

Yet the enthusiasm and dedication of people interacting with local honey remain strong in Marin, and there is no shortage of opportunity to support local efforts. “The beauty of working with the local farmers is that you’re supporting that farmer and you know where your honey is coming from,” Debra says.

While collecting pollen and nectar, honeybees provide essential pollination services that support our ecosystem, providing us with clean water, stable soils and a place for recreation. Plants that are reliant on bees for pollination cannot survive without these symbiotic interactions. For humans, honeybees not only support the environment but are also essential for food production — including everything from almonds to apples.

As Trotta-Marshall points out, honey gives us a connection with each other and the wonder of landscapes that we live among. “We forget that this incredible product is made by insects, it’s made by nature … we don’t really focus enough on how we are so profoundly connected to this earth.”

A Taste of Local Honey

Heidrun Meadery
Make a reservation online to enjoy a Champagne-style mead tasting and Heidrun’s farmscape at Point Reyes Station; pick up food to pair with your tasting (the mead goes particularly well with cheese and oysters from nearby). Heidrun mead can be found at The Farm Stand at Forest Knolls, Good Earth Natural Foods or Heidrun online.