Sonoma’s SingleThread Inn and Restaurant Is a Wine Country Oasis 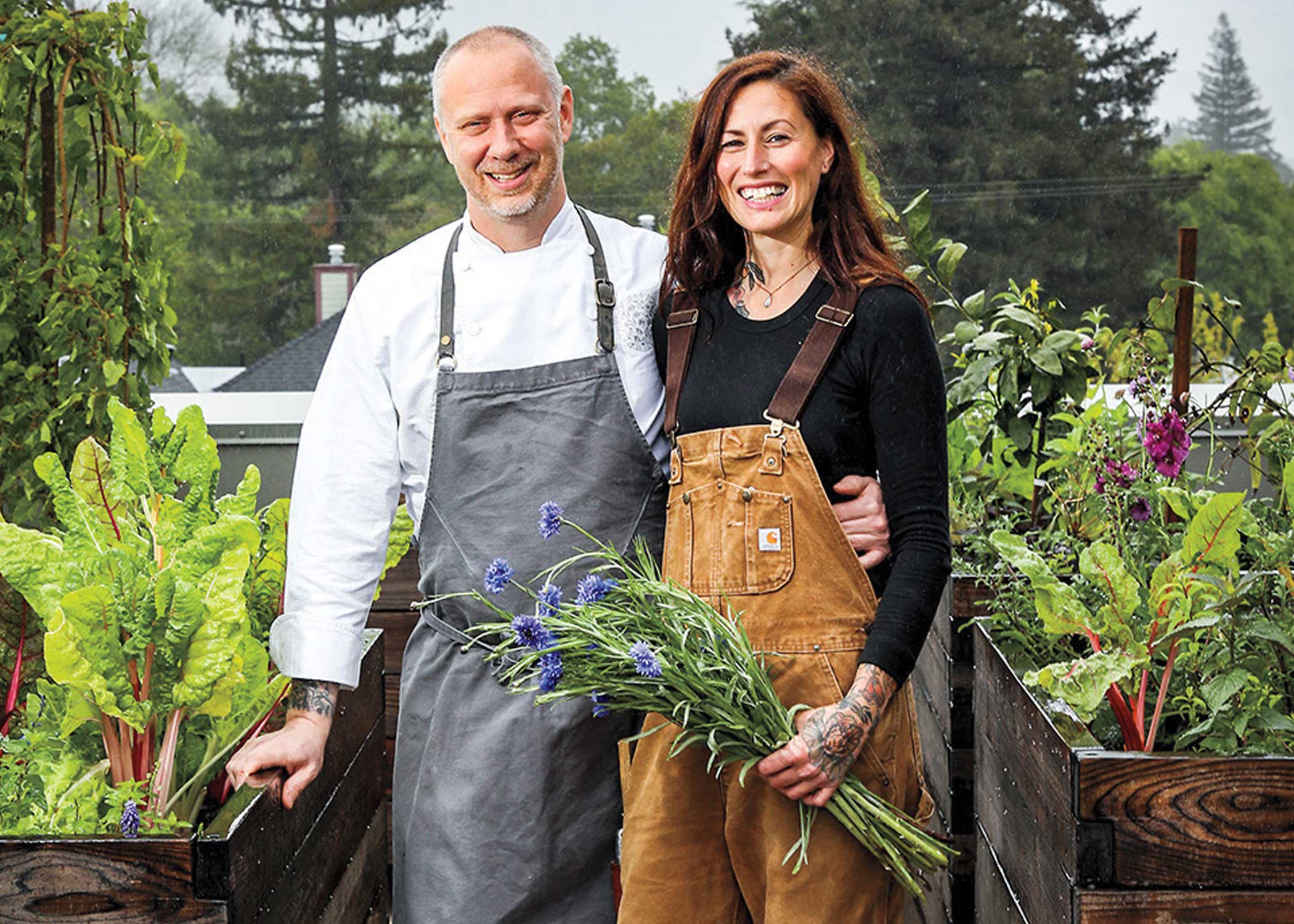 Kyle and Katina Connaughton (courtesy of SingleThread)
by Casey Hatfield-Chiotti

When Kyle and Katina Connaughton, owners of the luxury inn and three-Michelin-star restaurant SingleThread (from $665) in Sonoma, moved to Japan in their late 20s, they did it with intention. “It wasn’t so much like ‘oh, this is a random job, let’s move to Japan.’ It was a planned thing where we really wanted to go out there and learn about agriculture, cooking, ingredients,” recalls Kyle, who had gotten a job working for French culinary genius Michel Bras there.

He and his wife learned the art of omotenashi, which is basically a heightened sense of hospitality where one anticipates guests’ needs, while living in a remote village on Hokkaido, an island known for its off-piste terrain and abundant powder snow. Katina was seduced by sustainable farming.

The life-altering experience charted the course for what SingleThread would later become. “I learned the reverence for seasonality, to watch and listen to the subtle nuances of nature, and a deep-seated appreciation for the land,” says Katina.

The restaurant and inn, which has five guest rooms with features like vaulted redwood ceilings, Japanese Toto toilets and minibars stocked with matcha makers and homemade ice cream, opened in 2016 on a corner in Healdsburg’s historic downtown. A vital component has been a five-acre Alexander Valley farm, which has produced about 70 percent of the SingleThread kitchen ingredients. After years of leasing there, the Connaughtons partnered with Price Family Vineyards & Estates to purchase their forever farm on Dry Creek Road last October.

The 24-acre parcel, once a garden and retail plot, will allow them to expand their farm operations and create an agrarian utopia of sorts with a floral design studio, mushroom production, a truffle grove and fields growing everything from negi onions to Shishigatani pumpkins. SingleThread guests and members of the public will be able to visit and participate in workshops with farmers and chefs, hopefully by this summer. A collaboration with Bay Area company Botnia Skincare to grow and produce a line of botanicals and extracts for SingleThread is also in the works.

“People ask, ‘Are you trying to move from producing 70 percent [of ingredients used in the restaurant] to 100 percent?’ and that’s not the case. We want to expand and grow more varieties of things but still support other farms in the area too,” says Kyle.

The Connaughtons have a larger mission — to bring greater biodiversity to a grape-focused area to support wildlife and enhance ecosystems. The Michelin Guide awarded SingleThread a Green Star in October in recognition of its commitment to preserving resources, embracing biodiversity and reducing food waste. Last year was the first year Michelin awarded U.S. restaurants for their sustainability efforts, and SingleThread was one of only five restaurants in the Bay Area to earn the distinction. The awards were announced at a socially distanced gala on SingleThread’s rooftop.

“It all begins on the farm for us, and to have had the spotlight shifted from the restaurant property to the field was deeply appreciated by myself and the farm team,” says Katina.

Dining at SingleThread, which, despite its caliber, feels more like a dinner party than a stuffy formal affair (guests can usually walk in and out of the kitchen whenever they like, and dishes are often shared), has been a very different experience since last March. The restaurant offered some outdoor dining on a vineyard in 2020.

To give guests a transportive experience during the winter months, the Connaughtons opened a heated tent next to the inn, designed by notable Bay Area architect Ken Fulk, to resemble a Japanese forest. Nine-course dinners were designed to celebrate the bounty of the Hokkaido coastline (think slightly sweet uni and crab, creamy scallops and plump salmon roe culminating in a hot pot: roasted Duclair duck nabe or Hokkaido Wagyu beef shabu shabu).

The pop-up, dubbed Usu-Zan for the small active volcano in the village where the Connaughtons lived, had to shut down in December the day after it opened because of lockdown measures (it has since reopened, and reservations are available through the end of May). “It’s obviously been really challenging like it is for everyone. We’ve been fortunate that we’ve had opportunities to make the most of personal and professional growth,” says Kyle.

SingleThread chefs are staying busy producing 1,000 donation meals a week for Sonoma Family Meal, a collaboration between nearly 30 area restaurants that provide nutritious meals to locals in need, and they’re also making takeaway dinners like they did at the beginning of the pandemic. Their team, composed of chefs from all over the world, are taking turns coming up with creative menus inspired by places like the Philippines and Oaxaca. Still, Kyle says he longs for the day when he can see people enjoying the dishes he’s prepared (each a snapshot of time because of the peak season ingredients used) and interact with guests.

“That is the luxury for people: the time, freedom, ability and permission to switch off. We run our inn not like a hotel, but like a home. I think it’s most authentic when it’s in the way it was intended,” says Kyle.

The Connaughtons, who have been a couple since they were teenagers and who raised two daughters together, have built a partnership based on friendship, trust and shared ethos. When they do reopen the 55-seat restaurant with dark-wood-paneled walls and low-slung gray banquettes for indoor dining, they know there will be plenty who will want a seat at the table.