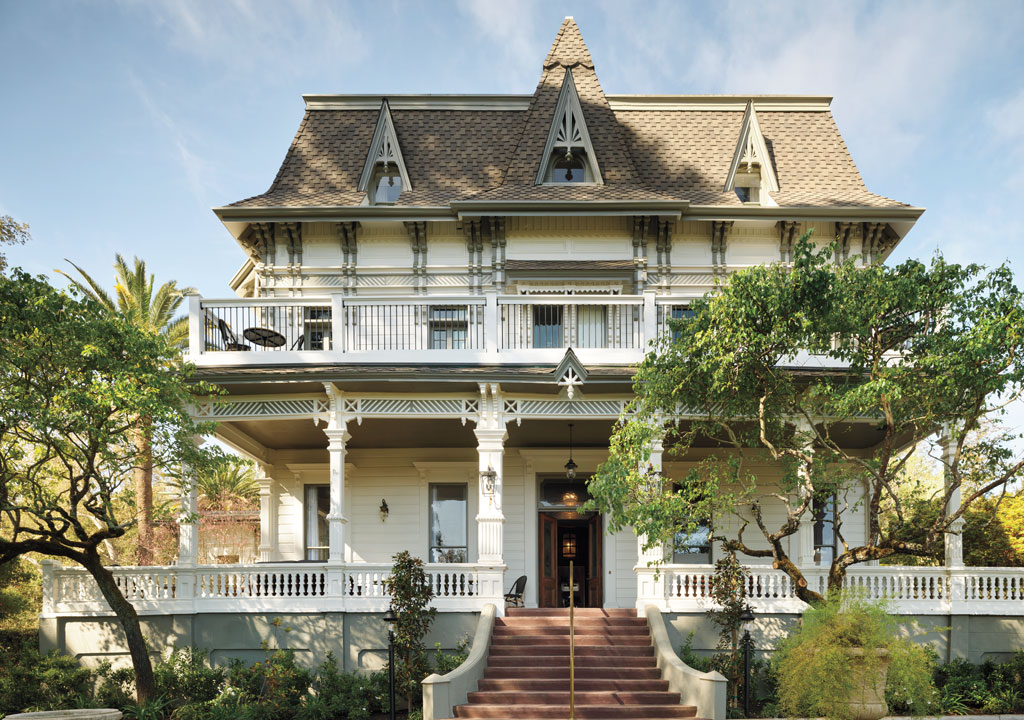 Sonoma County might best be known for endless acres of vineyards and an abundance of wineries to ensconce yourself in, but the region also boasts beautiful inns and hotels nestled amid the bucolic landscape. One such hidden gem is the newly reopened boutique hotel, The Madrona.

Many locals will already be familiar with the hotel’s previous incarnation, Madrona Manor, but this Healdsburg destination is now under the ownership of renowned San Francisco–based interior designer Jay Jeffers. Originally built in 1881 as a private residence, The Madrona derives most of its charm from the exteriors. Situated on eight acres of lush, romantic grounds, the 16,000-square-foot gabled mansion, along with the Carriage House and private bungalows, beckons guests with its design. And while it still emphasizes that “beauty for beauty’s sake” style, Jeffers applied his talents to redesigning the interiors of the former bed-and-breakfast. After spending a little over a year on refurbishment, Jeffers and his business partners, Cory Schisler and Kyle Jeffers, opened the doors to guests in April.

“The original residence and its Aesthetic Movement charm served as my main inspiration for the design, but I also sought to incorporate new ideas and contemporary pieces for an eclectic mix of Old World and new that makes The Madrona timeless,” says Jeffers.

Devotees of the hotel’s culinary offerings can breathe a sigh of relief, as chef Jesse Mallgren has returned to the on-site restaurant. For the uninitiated: Mallgren was the executive chef at Madrona Manor for more than 20 years, earning a Michelin star 13 years in a row. Though the restaurant’s menu has been completely reinvented for reopening, it still calls on Mallgren’s California-French techniques as well as other international influences.

“It’s no longer a delicate prix-fixe menu, but now the entire menu can either be shared or coursed out so that guests can enjoy it in a more approachable way,” says Mallgren, who grew up in Northern California and cites the region as inspiration for many of his dishes.

The restaurant at The Madrona will be open for all-day dining seven days a week with brunch on weekends. As is a must in Wine Country, visitors can expect an expertly curated wine list, but a partnership with West Bev also promises creative cocktails.

The approachability of the new menu extends to the atmosphere of the property itself, with the restaurant and common spaces mirroring that spirit. The dining room walls are a bright and lively yellow, while the front parlor is a welcoming shade of periwinkle. Both color choices are a nod to the on-site gardens, which the restaurant sources from.

“Chef Mallgren’s menu, while distinctively Northern California, also has some international influence, which is inspired by his own travels,” Jeffers says. “We took a similar approach to the design, where much of it is from local artisans and even original to the property, but there are some eclectic pieces from around the world that make The Madrona look and feel collected over time.”

New and returning guests can expect accommodations that go above and beyond comfort, with the added flair of Jeffers’s sophisticated design choices. Though it’s certainly a place where one can bask in the luxury of Sonoma’s Wine Country, guests will also enjoy a sense of vitality and liveliness as they lounge on the front porch or indulge in a meal on the Palm Terrace. No longer just a place for special occasions, The Madrona is a place for celebrating life every day.