Make Your Way to Montana For the Best in Luxury Glamping 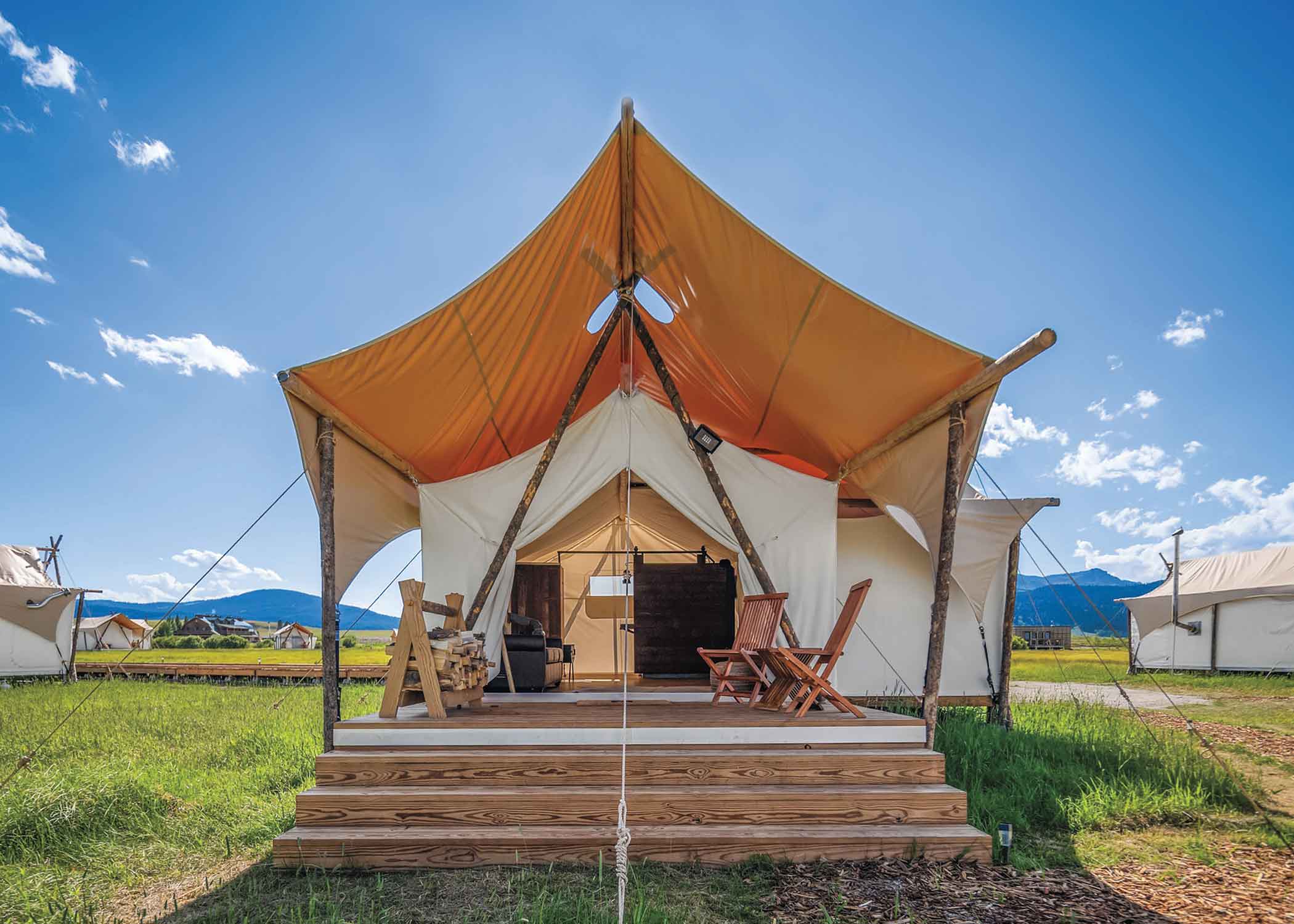 In 2005, Laurence Lipson looked for a word to describe the upgraded canvas tents he was planning to offer as accommodations on his sprawling Montana cattle ranch. He went through a thesaurus and settled on the word “glamping,” a combination between glamorous and camping.

“The name was so weird sounding. I sent it to a writer friend of mine, and she pitched it to The New York Times,” recalls Lipson. Resort at Paws Up opened soon after on 37,000 acres in the Blackfoot Valley (the Blackfoot River featured in A River Runs Through It carves its way through the valley). The rest, as they say, is history.

The Times picked up the story on Paws Up and luxury camping and started using the term glamping a few years later, helping to make it commonplace. Of course, it’s impossible to say whether Lipson was the first person to utter the word “glamping,” and luxury camping in canvas tents has been offered in other parts of the world for over a century. Still, there’s no denying this style of stay, where guests are treated to all the perks of camping without having to pitch a tent or cook eggs on a camp stove, has found a fitting home about 30 minutes east of Missoula on a swath where Lewis and Clark once reportedly had encampments and where bighorn sheep, elk and bears still roam.

Glamping has entered our lexicon for good and the phenomenon has become increasingly popular in the U.S., with luxury tented accommodations now offered everywhere from Big Sur to Maine’s Acadia National Park. With its lack of development, rugged wilderness and vast un-light-polluted skies, Montana is an ideal place to go on a glamping adventure without leaving the U.S. Travelers are guaranteed pristine natural beauty outside their tent flaps, with all the modern resort comforts from holistic spa treatments to new wave Western fine dining just steps away. Here are some glamping retreats to book in Montana this summer and beyond.\

The green o
The all-inclusive Resort at Paws Up has become the go-to destination for urbanites looking to indulge their Wild West fantasies (the management rescues wild mustangs, raises bison and hosts chuckwagon-style dinners). It offers accommodations in luxury one-, two- and three-bedroom spaces, tented camps, and an über-sophisticated glamping experience that became available in June.

The green o, which features 12 adults-only glasshouses, or hauses, is a resort within a resort (from $2,590 a night for two adults including meals and alcohol). Green o’s guests have access to the whole of Paws Up, but not the other way around. It’s on a secluded part of the ranch amid tall, slender tamarack pine trees. The glass, steel-and-copper houses are of four different designs, including a Green Haus with a living roof and a Tree Haus with a spiral staircase. Guests can absorb views of the Montana wilderness, stay warm next to a floating fireplace or enjoy wellness treatments like guided forest bathing, hikes and slow flow restorative yoga.

The green o’s guests-only restaurant is helmed by executive chef Brandon Cunningham, who was bewitched by live fire cooking while working at Portland’s Ned Ludd. Guests should expect ranch-to-table food with foraged ingredients (game meats like elk and venison and local lingonberry). Cunningham’s signature dishes include thin slices of wagyu beef next to a sizzling river rock from the Blackfoot River (guests sear the meat themselves and wrap it up in a shiso leaf with radish and aioli). Servers can also extinguish beef fat candles during the meal and use the juices to make bordelaise sauce tableside. Cunningham hopes his restaurant becomes the Fäviken of the West. “I would be so humbled to do what Magnus Nilsson did for his region,” he says.

Clear Sky Resorts – Glacier
In Northern Montana, near the Canadian border, Glacier National Park feels untamed. The landscape includes alpine lakes and jagged peaks and grizzly bear sightings are common. While there are plenty of lodge-style accommodations in the region, Clear Sky Resorts’ new Luxury Sky Domes engulf visitors in natural beauty while also pampering them with perks like modern bathrooms with rainforest showerheads and soft bathrobes (from $395 a night). The resort is sandwiched between mountains and the Flathead River, and it’s just 15 minutes from the entrance to the national park.

Each one of the 15 domes has oversize skylights and large windows, so guests wake up to the warm glow of a Glacier sunrise and fall asleep under a star-studded sky. Two-, four- and five-person domes have eco-friendly fireplaces, swinging chairs and wraparound porches with spruce tree views. The two-person Going to the Sun Sky Dome is a retreat in the trees with a suspended bed that hangs from a skylight. In the communal 26-foot-tall Welcome Dome, swinging chairs and panoramic windows overlook Montana’s Flathead National Forest.

Bring your hiking boots and fishing gear — the Stanton Lake trailhead is next to the resort, and there’s catch-and-release fishing just 300 yards away. Clear Sky Resorts also has a Grand Canyon location.

Dreamcatcher Tipi Hotel
In a green valley surrounded by snowcapped mountains, Dreamcatcher Tipi Hotel, just five miles from the North Yellowstone Entrance and the Roosevelt Arch, looks like a film set (from $349 a night). Accommodations in cozy climate-controlled tipi tents are the right amount of bohemian with layered Persian and cowhide rugs, faux fur throws and antique trunks.

Elk herds love the valley as much as travelers and can often be seen grazing on the property. Nightly communal campfires whisk you back to summer camp with storytelling, s’mores and the bonus of a free adult beverage or two. The hotel has complimentary morning muffins and bread and fresh-baked cookies in the afternoon, but there are also plenty of restaurants in Gardiner.

The owner of the hotel, who purchased it in 2021, is working on adding more tipis for the 2022 season. A recently added bathhouse has six private bathrooms with hot showers, heated floors and piles of fluffy white towels. The downside of camping is nowhere in sight.

Under Canvas
Under Canvas, a luxury tented camp outfitter specializing in seasonal locations on or near national parks, has two stunning Montana locations adjacent to Yellowstone and Glacier. The original Under Canvas, the West Yellowstone location (from $439), is on 40 acres of canyons and plateaus. One of the company’s most popular camps, it books up well in advance. Tents, many family-friendly, have rustic wood bed frames, woodburning stoves to keep chilly night temperatures at bay and private patios for stargazing. It’s best to book about a year ahead of time, and reservations are currently being accepted for summer 2022.

The Glacier Under Canvas (from $259) is likely to have more last-minute availability. There, lofted treehouse-style tents and safari suites include king-size beds, private bathrooms and forest and mountain views (some rooms do share a bathhouse). The undulating lobby with a mix of furniture from West Elm gives guests a lively communal space to read, sip espresso from the grab-and-go market or plan a Montana adventure like rafting the Middle Fork of the Flathead River. All Under Canvas locations offer free activities to please adult and kid campers alike, including yoga classes and arts and crafts.