It’s Never A Bad Time For Self Care 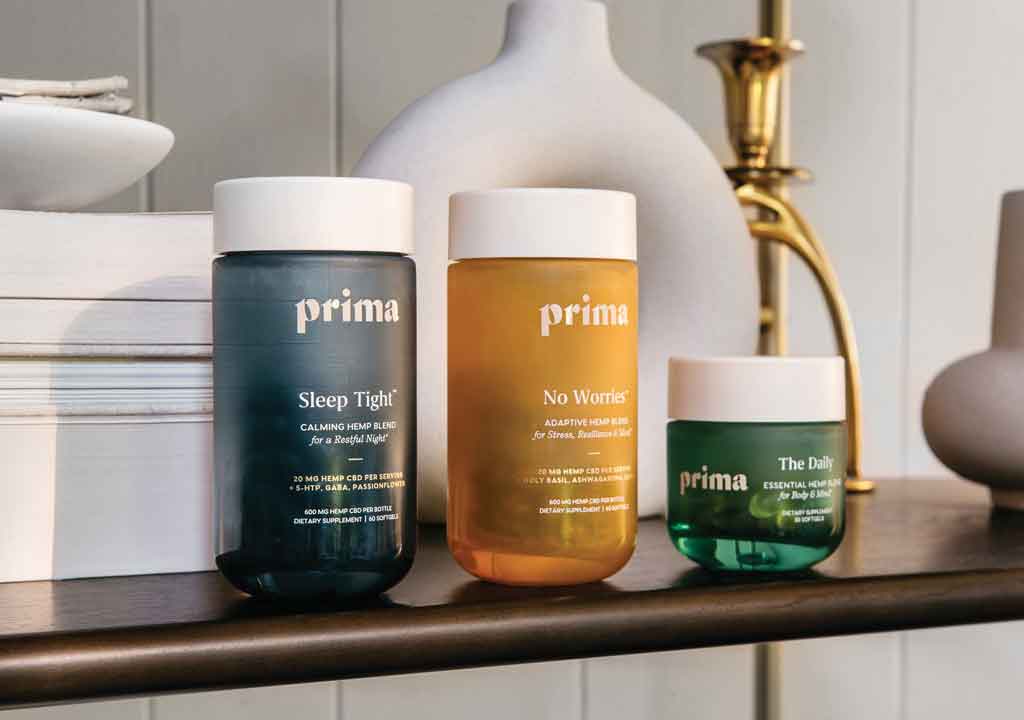 Prima isn’t just a beauty brand — it’s a CBD wellness phenom. The founder and chief education officer of this growing empire, Jessica Assaf, is no stranger to entrepreneurship in Marin County.

That path began in San Rafael when she was a teenager working at the Marin Cancer Project and setting the tone for her health-driven career. She was a founding member of Teens for Safe Cosmetics, which successfully got a bill passed into California law enforcing safety standards in beauty products.

Today her work as an entrepreneur entails overseeing Prima, a purpose-driven certified B Corp focusing on whole body care. Prima offers a range of products both for the skin-obsessed and for those looking to explore all that CBD products have to offer.

“To us, our products are the deepest expression of our values and truth,” says Assaf. “We’re really on a mission to eradicate the biggest epidemic of our time, which is stress.”

Assaf notes that stress acts as a toxin in both mind and body, and Prima’s nontoxic CBD well-being products leverage natural compounds of active botanicals to help combat stress and improve mood as well as sleep.

“We build these products to support the ripple effect — the idea that if someone takes care of themselves and feels better — well, just imagine what they can do for the world and the people around them,” Assaf says.

Though Prima is an anti-stress company, Assaf acknowledges building a startup with the desire to become the leading voice in the wellness industry is a difficult undertaking. But she practices what she preaches, offering wellness perks for employees like giving them first Fridays off from work to focus on their own well-being.

“We want to empower people,” she says. “Better days are at your fingertips, and you have a lot more power than you think in how you can feel.”

Marin has always been a haven for Assaf and she believes the community appreciates and values the importance of access to cleaning living, self-care and nature — all pillars of wellness.

“It’s easy to believe self-care is selfish, but taking care of yourself is a requirement,” she says. “We need to prioritize self-care as a form of activism and self-love, to be the best version of ourselves for others. When you feel good, you inspire others to do the same — it’s contagious.”

Owner and co-founder of International Orange Melissa Ferst has always hustled. From dominating in sports at an early age to earning a degree from UC Berkeley before venturing into the competitive corporate world (while managing the responsibilities of motherhood), she strived by finding balance, which has always been key to Ferst’s sense of grounding.

When the dot-com bubble burst in 1999 she lost her job — but two friends (turned future business partners) decided they wanted to start their own spa business together and invited her to join them. And what about that name? International Orange is a nod to the paint color of the Golden Gate Bridge.

“I think going over the Golden Gate Bridge feels like a sort of transformational experience,” says Ferst. “We try to achieve that — say, ‘let’s move you from one place to the next in your experience here.’ That symbol of the bridge has become more than just the color.”

Just like its noteworthy name, International Orange breaks the mold of a typical day spa and aims to inspire a sense of transformation for each client. To Ferst, achieving wellness and taking care of oneself should not be a luxurious splurge. There’s no need to disappear for an entire weekend — an escape to International Orange can be accomplished in an afternoon. Ferst believes this experience can be as simple as stepping away from your digital devices or letting one of the therapists work out a shoulder kink through massage.

“Schedule some time for yourself where you can step out of your life and your routine and have a space that is your own for a minute,” she says. “You’re doing something that’s really great for your body — your nervous system, muscular-skeletal system, spirit and mind.”

Ferst believes wellness is achieved by creating a feeling of energy and longevity to keep appreciating the things that make living worthwhile — for her, that’s family and a passion for her business. She appreciates the abundance of opportunities to connect internally and get moving physically.

“We’re about the complete wellness experience,” says Ferst. “Wellness is in our roots of how we approach everything.” She attributes her success to a supportive network of clients in Marin and says her employees are crucial.

“This job can be physically demanding and we work really hard to make sure we’re creating a culture where everyone feels good and supported on their own journey,” she says. “This business has shaped who I am, and it’s shaped how I view wellness. I feel so passionate about self-care and helping others.”

Gower should know. Returning home from Japan after 16 years working as an editor at the prime minister’s office, a private chef, a restaurant critic and a cookbook author, he knew he was missing something — and that something was the mysterious green powder called matcha that he’d discovered while living in the country.

Using his food industry connections, he began to import matcha directly from Japan. At first it was just for himself and his chef friends — at one point he was distributing to restaurants like the French Laundry and others with a total of 37 Michelin stars — but eventually, starting in 2010, he began bringing in enough to sell via mail order from his San Anselmo warehouse under the name Breakaway Matcha. “I really just wanted a secure stash,” he says with a laugh.

Gower is so convinced of the legendary health benefits of matcha — which he sources from the Uji Valley outside Kyoto where it has been cultivated for centuries — that the company website features a searchable database of thousands of research studies from around the world that use matcha as a variable.

“You can search breast cancer and matcha, and boom, there’s articles on that,” he says. Gower notes that matcha contains substances such as catechins, which are thought to induce the spontaneous killing of cancer cells, and L-theanine, which slows the absorption of caffeine and gives people “this nice, calm, focused energy that lasts a few hours.”

Gower also suggests drinking it like they do during Japanese summers: cold. In fact, the company has an entire category for coldbrew as well as for hyperpremium and culinary matcha, with 18 different blends ranging in price from $29 to $209 for 30 servings.

“It’s so satisfying when it’s hot out or you’re thirsty, or just any time; it just tastes really clean and fresh,” he says about the coldbrew. “It leaves a nice taste in your mouth and you feel good after you drink it; you’re energized and hydrated.”