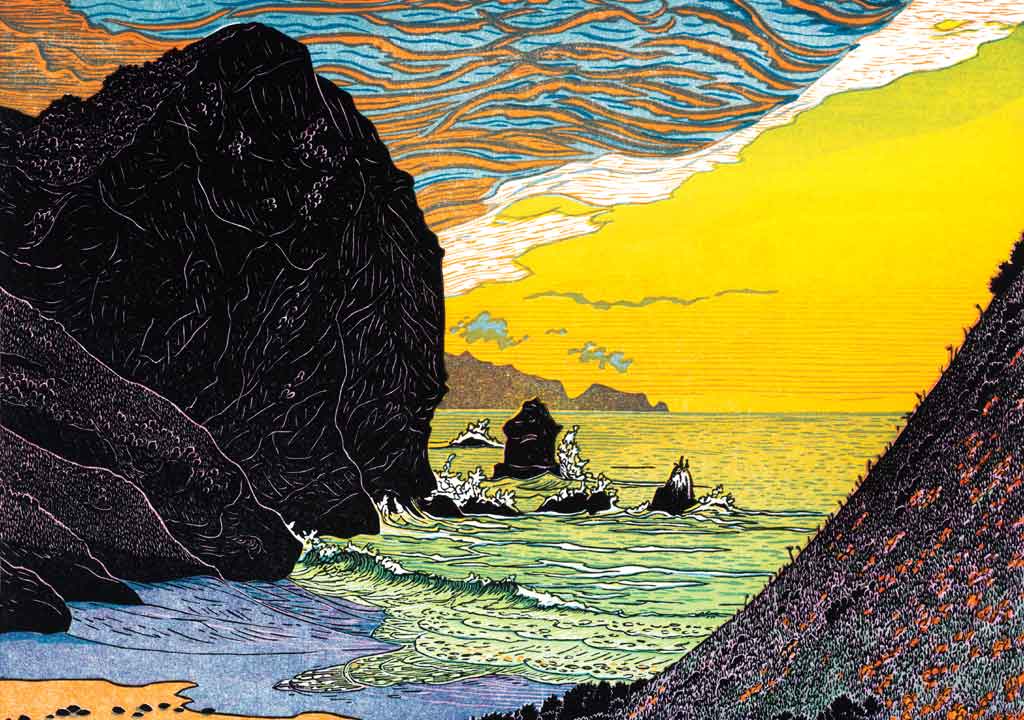 Tom Killion’s excursions in the outdoors often include time spent on landscape drawings, but, rather than a purely artistic endeavor, drawing for Killion is a process of observing, understanding and connecting to the natural world.

“When I do drawings, I’m not thinking, ‘I’m going to turn this into a print.’ I’m thinking ‘I love this place, it’s so great, I just wanna sit here and draw it,’ and I’ll spend all day,” he says. Killion attributes his fondness for local landscapes or “topophilia,” the love of place, to his childhood exploration in Marin’s natural settings. “I definitely got my sense of topophilia from growing up in Mill Valley. There were redwoods in the canyon and the mountain rising up above with all its different ecological zones, and you could walk right over it to the beach,” he says. “You didn’t need to be transported by anyone else to get into all these wonderful places.”

Drawing also became a big part of his outdoor experience when he was growing up. In particular, Killion recalls returning home with a bundle of drawings and paintings after one inspiring Boy Scout backpacking trip to the Sierras in junior high. “Those things from your early life are really important. When you get into your 60s you start to look back and you can kinda see the gems, the little starting points from which things grow.”

Today, back at his Point Reyes studio, a selection of Killion’s prolific drawings from outdoor excursions old and new provide the foundation for his printmaking. In turn, his prints reveal the splendor of the lines, scale and ecological diversity that define local Marin outdoor areas, from Mount Tamalpais to coastal cliffs. He starts his process by making woodblock carvings using Japanese-based techniques and then pulls handmade paper over them in a German printing press full of oil-based inks; it’s all informed by a strong respect for handcraft traditions, which were the go-to before the digital era. The artist’s unusual combination of methods has helped him to develop a singular California vernacular and recognizable aesthetic.

“The Japanese influence is very Californian, too,” says Killion. In the early 20th century, with trade and immigration connecting Japan and California, folks in Mill Valley had a strong aesthetic interest in and exposure to the style. “All around southern Marin you saw a lot of Craftsman-style houses, which were very influenced by Japanese building techniques, and people had Japanese-style gardens,” he says. It was during his childhood that Killion became interested in traditional Japanese prints. In particular the work of printmaker Hokusai, including “Thirty-Six Views of Mount Fuji,” which inspired him to direct his attention to Marin’s own remarkable mountain, Mount Tamalpais. In his 20s Killion completed his first hand-printed b