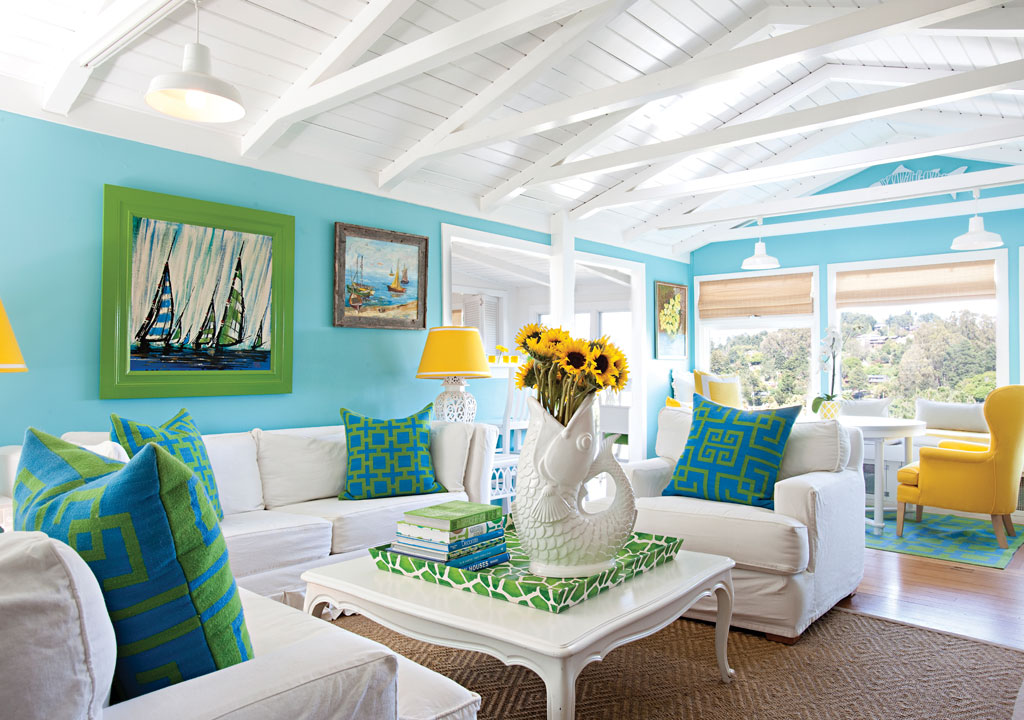 It took my whole life not to be afraid to be a creative person,” Laurel Harrington says. It’s shocking, to someone who’s been aware of her interior design work — which spans high-end residential projects for San Francisco’s toniest families to wineries like Silver Oak, which she did in collaboration with local architect Daniel Piechota, not to mention a new furniture line (which we’ll get to) — to hear her say that she ever had an iota of fear. But this industry, even as it might be filled with iconoclasts, can push even the most creative person toward a subtle median, gently shaving off all the parts that make them them. It takes someone with a combination of strength, perseverance and a particular affinity for joy to really make it — and make something new.

A few years ago, Harrington, who founded Harrington Design in 2002, was working with three families on interior design projects and found a common thread. “They didn’t want to feel like their kids were off somewhere else,” she says of the families, each of whom had a bunch of children. “In those years we were constantly searching for fabrics that were interesting and playful and fun, or pieces of furniture that were timeless.” Harrington’s clients tend to fit a similar profile — a design-driven wife and a hardworking husband, both of whom are devoted to creating a family life worthy of the work they’ve put into building comfortable lives for themselves. And those clients “don’t want something formulaic; they like to collaborate.” Being pushed — and supported — by these clients, in combination with a general distaste for disposable furniture or super design-y pieces, eventually led to the creation of honeydudley.

“It’s not kids’ furniture,” Harrington says of the line, which encompasses nearly infinitely customizable chairs, tables, stools and a bed, and which combines graphic imagery — the flagship product is the Daisy Doo chair, a polished base that comes in either oil-rubbed walnut or American white oak and features a poppy iconographic floral daisy-inspired back, made with sophisticated materials and a keen attunement to craftsmanship. The bed, whose headboard is a series of jigsaw puzzle pieces, comes in color combinations that are unusual for an interior designer. All of which is inspired by both the consultant Eve Ashcraft, who saw an early iteration and offered to help Harrington come up with colors, and the fact that Harrington lives in an extraordinarily colorful house.

Eschewing the drama and chaos of San Francisco for Mill Valley, Harrington has been in the same 100-year-old farmhouse for decades, though for the last seven years she’s shared it with her son, Crosby. Built as a summer cottage and supremely modest in scale compared to a number of the houses that directly abut it, the house is a living laboratory for Tiburon native Harrington. “I was the only person who didn’t want to tear the house down,” Harrington says of making an offer and of going up against a developer who wanted to get rid of the house, split the generous lot and make a buck. The house’s existing owner, a woman who had raised her four kids there, refused to sell for decades, even when presented with the juiciest of offers. But something about Harrington clicked. Maybe it was the fact that she had a dog, as the owner had; maybe it was her dedication to preserving the spirit of the house; or maybe it was just one of those ineffable connections that can happen over a plot of land and a collection of building materials. In any case, Harrington moved in and made it her own.

“I love living here,” she says. “We have beautiful views everywhere; it’s little; it just has a good vibe.” Indeed, the house does have a very good vibe, from the striking green door that opens up into a turquoise entryway/living room furnished with extremely comfortable-looking (and probably feeling) white beach-y furniture that’s half Stinson, half New England, and all Harrington’s take on Mill Valley. White-painted Daisy Doo stools featuring blue-painted petals and a deep emerald upholstery line the navy-cabineted kitchen, a layered Daisy Doo table anchors the collection, and that jigsaw headboard makes a surprise — and surprisingly fun — appearance. Her own bedroom is tiny by luxury standards, but makes up for the lack of usable footprint with the introduction of bright kelly green painted walls, the deeply hued wooden panels meeting the bright white-painted ceiling and creating a feeling of playfulness, interiority and deep solace.

The house is a respite for Harrington, who’s no stranger to the hard work of launching a successful and much-lauded furniture line while keeping up with her busy schedule as an in-demand interior designer. And it allows her to continue to return to her creative origins, the kind of energy that led to honeydudley and all that’s to come. It may have taken her whole life not to be afraid, but she’s made it.