From Sausalito to Waikiki: A World Record Attempt 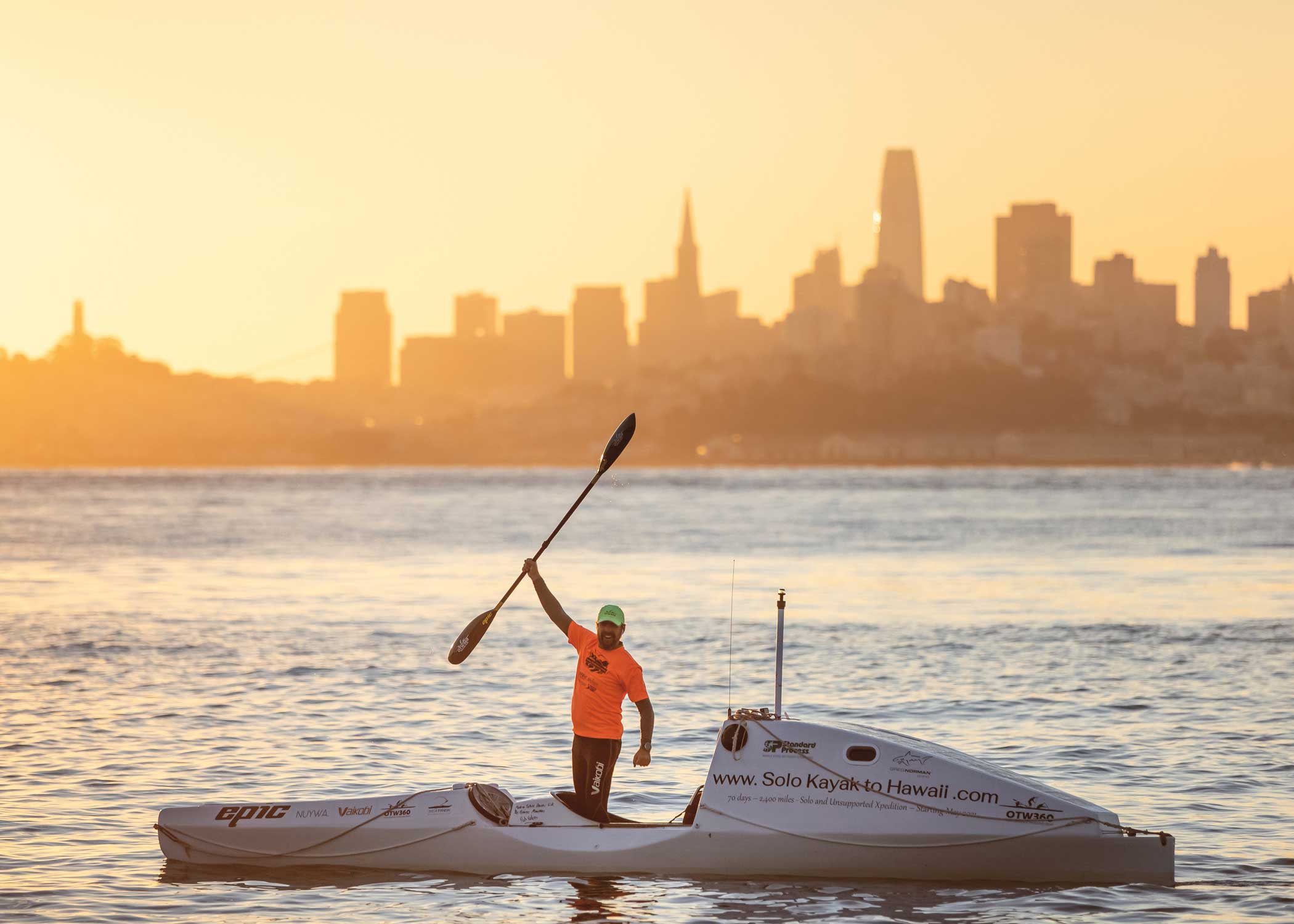 On May 30, Sausalito residents will see a strange sight in the early morning hours: a Frenchman, 44-year-old Cyril Derreumaux, who lives in Larkspur and trains in Sausalito, will hop into his specially made kayak and depart from Sea Trek, followed by a flotilla of small crafts that will accompany him to the Golden Gate Bridge.

From there, the paddlers and rowers will head back to the comforts of their homes while Derreumaux continues on, unassisted and under his own power, for another 2,750 miles, planning to land, 60 to 70 days later, in Waikiki. His goals are to set a Guinness World Record, gain a new sense of himself, and catch up on Seinfeld.

“That will probably be the point where I say goodbye to everybody and that’s gonna be so emotional,” he says of crossing the gate and heading to the open ocean. “What is that going to be like? I don’t even know how to visualize it, but it’s going to be very intense. These kinds of emotions you don’t feel in the real world.”

And that is the essence of the journey, the “human element,” that Derreumaux expects he will discover as he pushes himself to the limit on the water. Although he has conquered the ocean in a small craft before — setting a Guinness World Record for the fastest crossing to Hawaii with three other rowers in 2016 — this will be the first time doing it solo, and in a kayak.

“The biggest challenge will be being alone. I don’t know how I’m going to react. I’ve been training for it,” he says. “I have all the entertainment in the world — music audiobooks and podcasts and I’m planning to download all the seasons of Seinfeld. But I might end up talking to myself.”

Derreumaux also has multiple sets of everything, including GPS units, a satellite phone, water desalination devices, water pumps, paddles, solar panels and lithium-ion batteries, as well of a selection of high-fat powders and even specially made dehydrated energy bars that each contain 550 calories — a meal in a bar, he says — so that he can last out there without any outside support. His confidence is high given all this but he says storms will still be the scariest part — especially if he is sealed inside his tiny waterproof cabin when one hits.

“The waves could be so big that they make the boat flip,” he says, adding that the fully loaded 800-pound boat is self-righting and has a sea anchor, essentially an underwater parachute, that will slow it down and put it in the right orientation against the waves. “You are on the infinite ocean, you don’t see land, and with the fury of the winds, it just makes for a scary moment.”

That the custom kayak was made at all is something of a miracle. To find the best person to make it, Derreumaux called the only guy he could think of who might know: Peter Bray, who kayaked from Canada to Ireland in 2001 in a vessel made by Rob Feloy. “It didn’t tip once,” Bray told Derreumaux, who tracked down the English boat builder, by then retired, and convinced him to make his craft, the Valentine. “Look, I would love for you to build it if you could, you know, there’s nobody else,” he told Feloy. “I must have been enthusiastic enough that he decided to take on the project.”

Above all else, Derreumaux knows this will be a life-changing journey. “I don’t know what I’ll learn. But I know I’ll be a different person and hopefully a better human being when I come back,” he says, thinking back to his previous crossing. “When I arrived home, I enjoyed all these simple pleasures so much — my dry pillow, a hot shower and hot coffee. Everything had so much more value that you can’t explain if you’ve never missed it.”