Everyone Is in High Spirits at Hanson of Sonoma 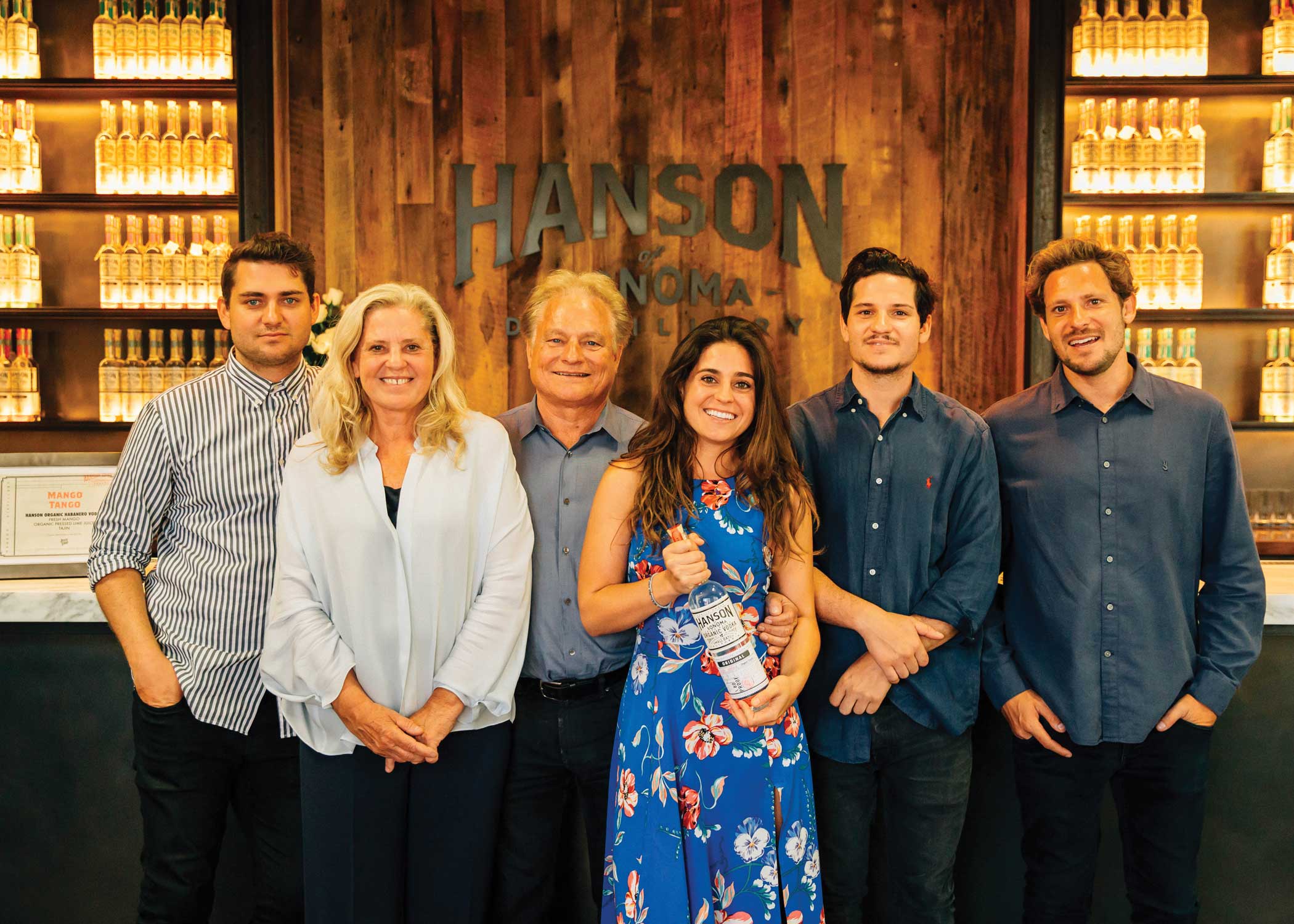 When Scott and Judy Hanson said no to their sons as they were growing up in Ross, they meant it. They still meant it when Chris and Brandon were in their twenties and asked for help launching a craft distillery. But the sons kept asking.

Fortunately for the brothers, their father had switched from owning art galleries to producing films, and his final movie was about bootleggers (2012’s Lawless with Shia LaBeouf and Jessica Chastain). “Producing that movie sparked his interest in our idea, and he became convinced it was different enough to stand out,” says Chris. Scott confirms his son’s account: “Working with the film’s writer taught me a lot about whiskey-making, so even though I had no experience in that industry, the boys finally persuaded me. They had been watching creative brewers getting substantial attention and realized there were very few innovative craft spirits being made.”

Scott and Judy had already sold all but one of the 26 galleries they owned nationwide — the Hanson Gallery of Fine Art in Sausalito remains — so this new idea seemed capricious. Or was it? They would soon find out when they agreed to join all of their kids — their two entrepreneurial sons, another son, Darren, and their daughter, Alanna — in opening America’s only major distillery, Hanson of Sonoma, to use grapes rather than grains in its spirits.

Once the grapes are grown, harvested and pressed by Ceja Vineyards, another family business that shares the distillery building (the distillery is in the former Carneros Brewing Co. building), the Hansons oversee the process of turning grapes into spirits. Most are used in cocktails (see the recipe on the opposite page) that are paired at the Sonoma distillery’s pond-side tasting area with wood-fired pizza, charcuterie, artisanal cheeses, truffles or caviar. The Sausalito gallery, which displays some of Scott’s metal sculptures — he’s also an accomplished artist — now serves as a second tasting room where cocktails are paired with Hog Island Oysters and other small plates served both indoors and outdoors.

Several distinctions, besides the use of grapes, set the Hansons’ spirits apart from most competitors. All of the products are certified organic, free of added sugars, and gluten-free, additive-free and GMO-free: Hanson is America’s first GMO-free-certified distillery. All ingredients are listed on every bottle, including the locally grown, hand-cut cucumbers, Meyer lemons, mandarin oranges and peppers in the infused vodkas. Also, fermentation byproducts (“congeners”), which are partly responsible for hangovers, are removed.

“Congeners are undetectable down to the parts per million in our vodkas, which makes them very smooth and any hangover less intense,” says Chris. “Oprah called it ‘practically health food.’ ” The vodkas won major international competitions in 2013 and 2014 when the brand launched. That led to widespread distribution and Hanson spirits are now sold in markets, restaurants and bars in all 50 states. The company has grown steadily, even during the pandemic, offering curbside pickups and deliveries of spirits, premixed cocktails and distillery-produced hand sanitizers.

Although the Hansons’ roots are local — all six family members live in Marin — the influences on their spirits are international. Besides vodkas, for example, they make a Scottish-style single-malt whiskey aged in bourbon barrels using a small-batch, double-barrel blending method they observed in Japan.

“We’ve been approached by most of the large distributors to sell some or all of the business, but we want our kids to keep going,” says Scott. The initially hesitant patriarch is now the company’s biggest cheerleader as president and CEO, but not for much longer. “I told my kids I would be full-time until I turned 70, which was last April, so I plan to step back soon. I’m very excited about them fully running the company because I can see they will be very good at growing it in a very creative way.

“Thank goodness we listened to them,” he adds, “because it’s been a lot of fun to work together as a family in making something we’re proud of.”

Perfect for the holidays, this festive cocktail can be purchased “pre-batched” from Hanson (just pour over ice), or make it yourself by mixing:

Stir together, add ice and enjoy!