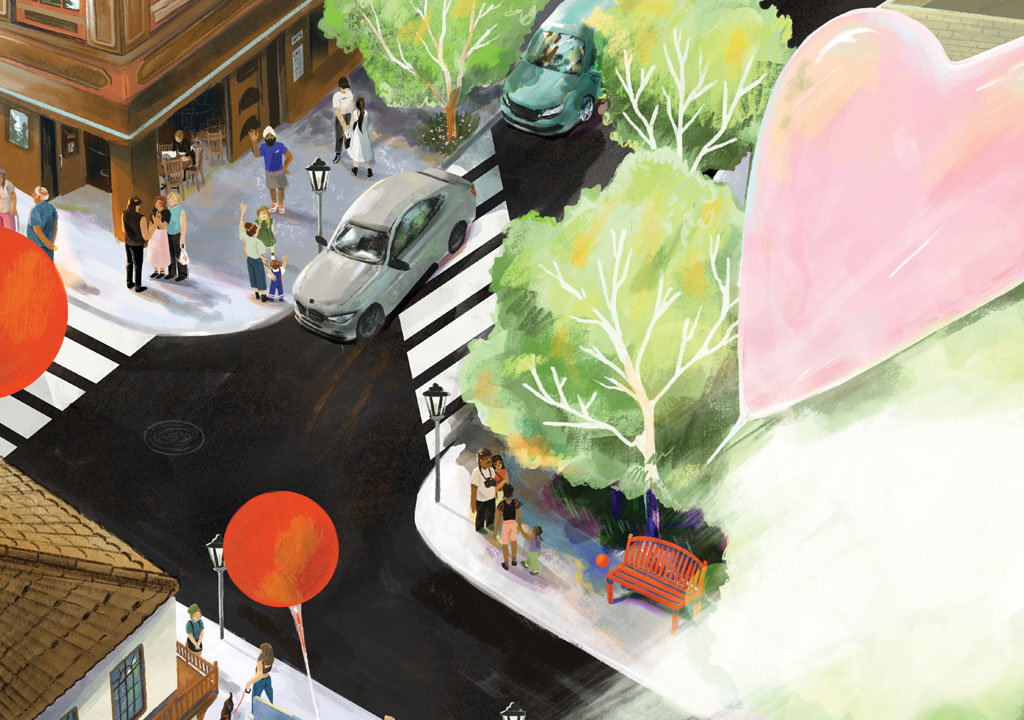 While strolling through downtown Mill Valley, Marin arts promoter Michael Golden noticed that he couldn’t go for more than a block without ambling past a gallery, theater or music venue. So, when he heard about the California Arts Council’s call for proposals for the second round of California Cultural District designations — downtown San Rafael was among the first 14 cities to be honored in the 2017 first round — he instantly thought of Mill Valley. The city council and chamber of commerce there agreed and put him on the case.

“If Mill Valley doesn’t get a cultural district designation, no town should,” says Golden, who promoted arts venues in Miami-Dade County before arriving in Marin. “Artists, musicians and actors have been coming to Mill Valley since before the bridge was built.” The announcement of new cultural districts is expected in December. The proposed downtown designation would highlight 21 venues, most of them walking distance apart. If approved, it should give the outlets a boost, as most are nonprofits that have had to scrape by throughout the pandemic on state, county and foundation grants.

In addition to the downtown Mill Valley venues and events described here, others are about a mile away: the Marin Theatre Company features new plays and presents the Macbeth sequel Dunsinane Sept. 22 to Oct. 16; the 50-year-old Mill Valley Chamber Music Society performs a Bach concert at a Mill Valley church on Oct. 2; and the O’Hanlon Center for the Arts hosts its annual Wabi-Sabi exhibit on Sept. 15 through Oct. 29. Cultural spots with historical significance include the 1892 Lumber Yard (now a collection of 17 artist studios, shops and eateries); the 1902 Outdoor Art Club (a Bernard Maybeck–designed clubhouse); and the 1928 Depot Cafe and Bookstore (a train station-turned-cafe/bookstore).

Theaters and Music
Throckmorton Theatre, built in 1915, is a multi-genre performing arts center featuring live music, comedy and even free puppet shows. Curtain Theatre stages free Shakespeare plays just up the street in Old Mill Park each summer (Two Gentlemen of Verona is playing through Labor Day). Sweetwater Music Hall celebrates its 50th anniversary in November with special performances by legendary rock, pop and jazz musicians. Until then, the storied venue will continue to showcase local and tribute bands almost nightly. The CinéArts Sequoia, a 1929 art deco gem, is owned by the nonprofit California Film Institute, which operates the Mill Valley Film Festival (more on that later). Renovations will soon expand it from two to four screens.

Galleries
The fact that two new downtown galleries are opening after two years of pandemic shutdowns is a sign of downtown Mill Valley’s robust appeal. One is Aerena’s fourth North Bay location, which began showcasing a variety of artists and genres, including photography and midcentury furnishings, after opening in July. And in January 2023, Anthony Meier Fine Arts, the S.F. Pacific Heights gallery, will open a 4,000-square-foot space previously occupied by two stores near the Sequoia Theater. The proliferation of galleries downtown began in 1969 with Robert Green Fine Arts, which specializes in abstract expressionist art. Painter Ed Moses’ work will be displayed Sept. 30 to Oct. 30.

The Kim Eagles-Smith Gallery, which relocated from San Francisco in 2019, will present a group show in September and work by Marin landscape artist John McCormick in October. The Desta Gallery moved to Mill Valley from San Anselmo in 2020 and displays contemporary art with an emphasis on socially relevant works; Archie Held, Isabelle Maynard and John Wood and will exhibit through Oct. 15. The Seager/Gray Gallery is a woman-owned gallery featuring Renée Bott’s digitally modified Renaissance etchings and engravings (Sept. 1–29) and Devorah Jacoby’s figurative and abstract paintings (Oct. 1–30). And, Poet and the Bench displays the work of more than 50 artists, artisans and jewelers.

Events
The Mill Valley Fall Arts Festival (Sept. 17–18) has been a popular event in the redwoods of Old Mill Park since 1957, with musicians entertaining the festival-goers all weekend. Also this fall, the Sequoia theater will serve as the primary home of the prestigious Mill Valley Film Festival (Oct. 6–16) for the 45th year.

The Mill Valley Arts Commission puts on three events at the Depot Plaza: First Tuesday ArtWalks (monthly except in January, in 16 galleries and other downtown venues that host receptions and exhibits), Concerts in the Plaza (eight bands, including Shana Morrison & Caledonia on Sept. 10–11), and Comedy in the Plaza in June.

Poet and the Bench

O’Hanlon Center for the Arts