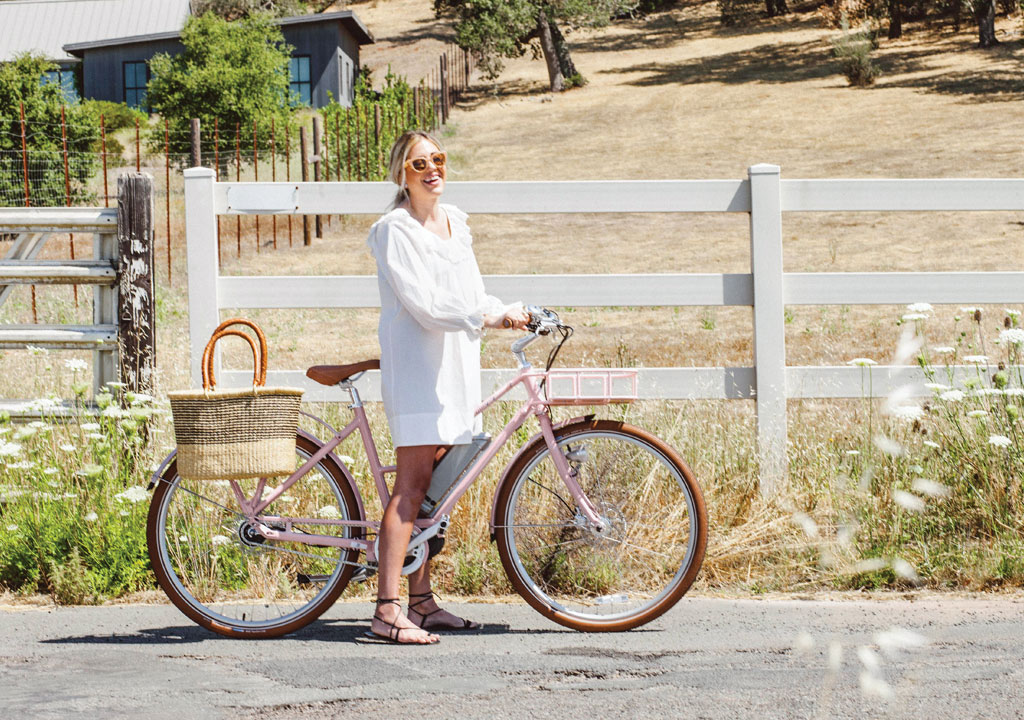 “Moving to Marin is really at the heart of this story,” says fashion and marketing executive turned e-bike entrepreneur Jen Cohen Bogan. Despite family roots in Southern California and a decade spent working in New York, the Harvard Business School grad and her husband agreed Northern California — specifically Marin — would become home for their young family one day.

“We always loved the outdoor lifestyle here, but after moving up from San Francisco, I started seeing people around town on these bikes with their kids on the back. It was 2017, and I had no idea what they were and had to ask my husband about them,” she says. Having stepped back from her position as VP of global marketing and digital at Sephora subsidiary Kendo Brands, Cohen Bogan planned to spend more time with their children, but always knew she wanted to create something for herself. “I wasn’t sure what that would be or look like and decided to take time out, be with my family and see what percolated,” she says. “When my husband was like ‘that’s an e-bike,’ it piqued my interest from a business standpoint, and I immediately had to try one.”

Aside from “riding up a hill with no effort,” Cohen Bogan’s “lightbulb moment” was realizing the world e-bikes could open — taking the kids to school, cycling to the office, going to lunch — all without sacrificing comfort or style. Zero emissions and reducing carbon footprint also appealed to the sustainably minded new Marinite. “I could get around the neighborhood faster than in my SUV, but the freedom I felt from riding a bike and being connected to nature resonated. Who wants to be sitting in their car in Marin?”

The only issue was finding a bike that matched her aesthetic vision and offered a rider experience she found lacking in available brands. Research trips to bike shops and the Marin Museum of Bicycling (which displayed a Susan B. Anthony quote about how the bicycle became a symbol of women’s emancipation) served as significant sources of inspiration. A visit to Amsterdam, “where everybody cycled and looked stylish, no spandex in sight,” followed by fact-finding trips to Germany (the world’s most advanced cycling market) and Asia to meet manufacturers, helped fine-tune design language, hardware and finish choices. “Forget the glass ceiling. Instead, make your own ceiling,” says Cohen Bogan, who hopes brands like her Bluejay Electric Bicycles inspire more women to pursue their entrepreneurial dreams.

Her debut Premiere Edition, an elegant Dutch-style step-through cruiser, topped must-have lists when it presciently launched in the fall of 2019 and has since been joined by the Bluejay Sport, a more dynamic all-road ride with a top speed of 28 mph. “The secret at LVMH was always how do you create a timeless brand that’s on the forefront and offering something new?” she says. “I set out to create a bike people wanted to ride because it’s awesome and just knew the risk going into business as a total industry outsider was one worth taking.”

Eyeing a market for kids and teens — her children are now “begging for their own Bluejays” — Cohen Bogan says additional models and customizable options will eventually round out the fleet. Thanks to a core collection of attractive neutrals and limited-edition shades, including a custom blush so popular it’s now permanent, the most challenging decision might not be getting a Bluejay, it’s picking a color.

Mad Dogs & Englishmen in Mill Valley (her first sales partner, who designed the pet-friendly sidecars) and Breaking Away Bicycles in Ross are two local purveyors, but the brand’s new stand-alone boutique in Newport Beach showcases both models alongside their entire accessories range — from rattan pannier baskets to chic bamboo bike bags. “You’ll be seeing more Bluejay shops in the future,” Cohen Bogan says. “Our office-meets-warehouse and demo HQ in Larkspur is a great place to stop in for a test ride, but when it’s time for a second store, Marin will be top of the list.”