BMW and Alpina Aim to Impress With B8 Gran Coupe 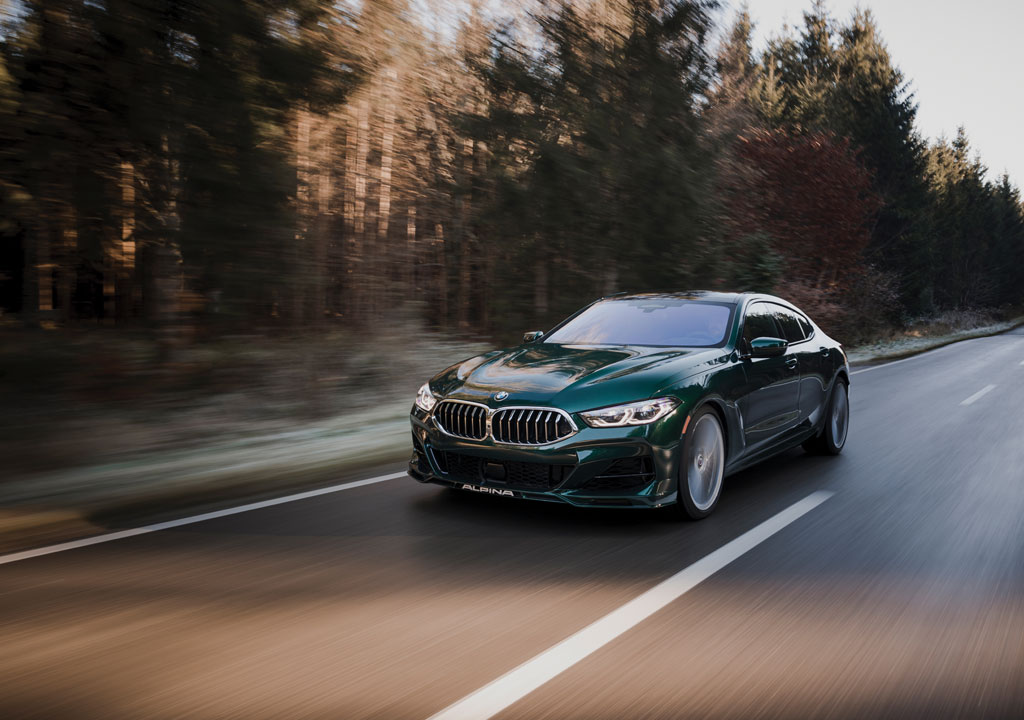 It was a sunny morning in Sausalito, with a cool, crisp hint of the just-departed fog. As I feathered the BMW Alpina B8 Gran Coupe along the waterfront, its quad stainless-steel exhaust murmured so softly that only a passing connoisseur would have known that a 612-horsepower bi-turbo V8 lurked beneath the hood. But I, for one, couldn’t forget, for every time I glanced at the hand-finished Lavalina leather wheel, a red-and-blue emblem at its center, depicting a throttle and a crankshaft, reminded me that this particular B8 Gran Coupe was no ordinary BMW, but a hot rod as hot as they come.

When we think about hot rods, we tend to think of American cars — whether prewar, postwar, midcentury or modern — with rumbling engines modified to the max, and far-out paint schemes and interiors to match. What we don’t tend to think of are BMWs, and big BMW sedans in particular. But for the past 50 years, Alpina, a family-owned firm in the Bavarian town of Buchloe, has been creating BMW hot rods that are among the fastest and most powerful cars on the planet, and some of the most visually striking and exquisitely luxurious as well.

The roots of Alpina reach back to 1962, when its founder, Burkard Bovensiepen, a young business and engineering student, developed a Weber dual carburetor to boost the performance of BMW’s new 1500 sedan. BMW engines equipped with Alpina carburetors quickly drew acclaim from the automotive press and garnered the admiration of BMW’s sales boss, Paul G. Hahnemann, and in short order, BMW awarded the full factory guarantee to BMWs with the Alpina system.

In the ensuing decades, Alpina became increasingly involved in the development of BMWs for the racetrack and the road, and as the relationship between the two companies deepened, so did the complexity of Alpina’s engineering work, to the extent that today, two to three years before a new BMW goes into production, Alpina has already begun calculating the output potential of the base engine and considering the attendant modifications to all of the other systems, from braking, suspension and steering to cooling and aerodynamics.

At the northern end of Bridgeway, I aim for the freeway, and as I prod the throttle, the B8 Gran Coupe rushes forward on a massive wave of torque, punctuated by one after another satin-smooth shift, courtesy of its Alpina Switch-Tronic-equipped eight-speed automatic transmission. The sensation is electrifying, yet I feel completely at ease: the paradoxical effect of Burkard Bovensiepen’s personal predilection for cars that are as easy to drive as they are powerful and potent. And therein lies the difference between an ordinary hot rod and a BMW Alpina. For whereas the former wears its emotions on its sleeve, or perhaps tattooed on its biceps, a BMW Alpina is far more discreet, a mysterious stranger with a sartorial streak, gliding along a boulevard leaving whispers of awe and admiration in its wake.

Cutting through the redwoods on Lucas Valley Road, the B8 Gran Coupe’s Alpina Green Metallic coat shimmered in the shadows. The atmosphere in the cabin — clad to Alpina standard in buttery Merino leather — was cool, tranquil and supremely comfortable. I lowered the windows and listened to the wind. And as excited as I was for my destination — the deliciously uplifting Saltwater Oyster Depot in Inverness — and in spite of the fact that I was behind the wheel of an automobile that could sprint to 60 in 3.3 seconds and easily top 200 miles an hour, I found myself not speeding up, but slowing down, taking the time to savor every graceful shift.