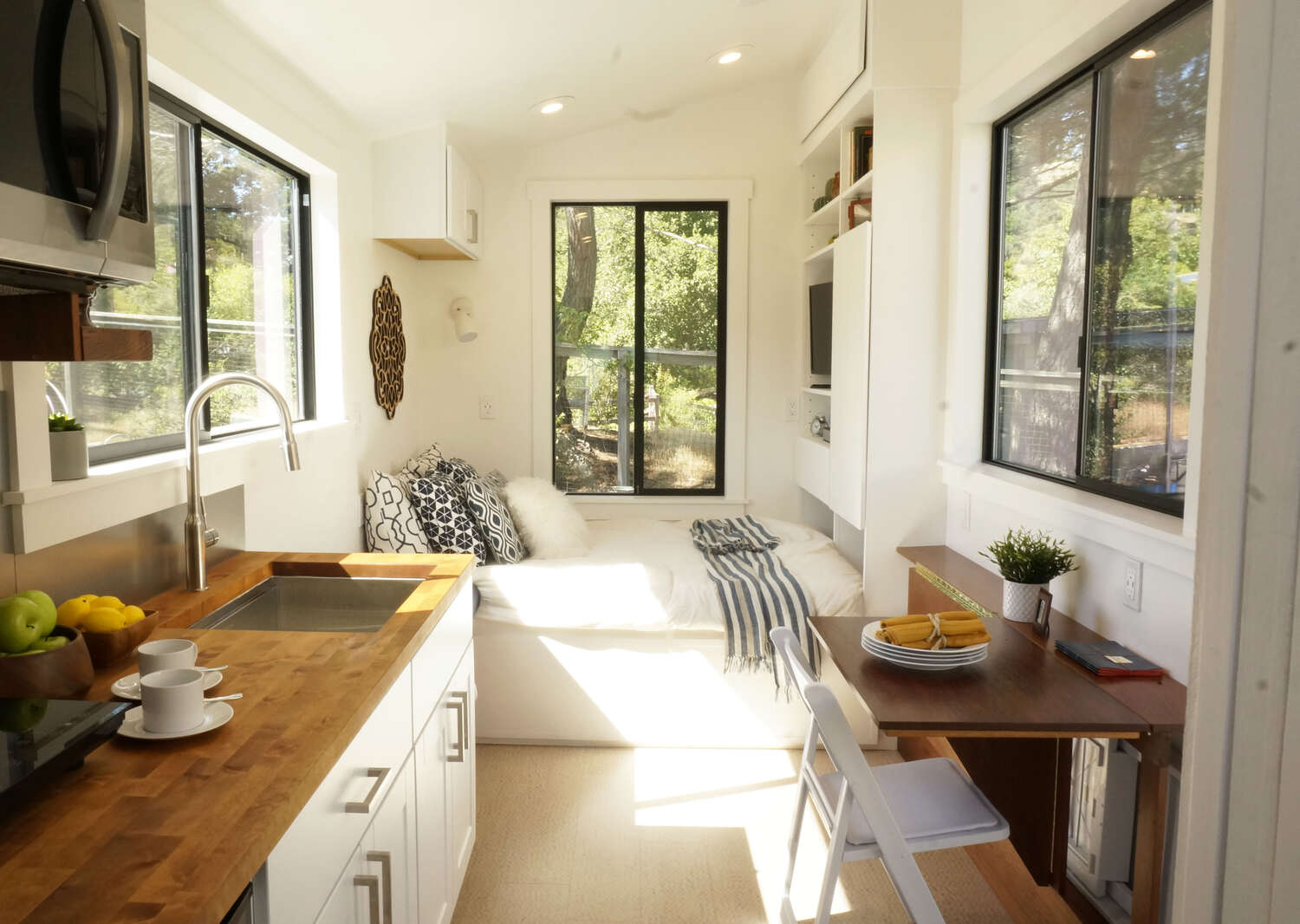 For some, tiny homes are novelties; for others, they’re a lifestyle. But for Sean Ticknor, constructing these petite dwellings is the foundation of his nonprofit, Big Skills Tiny Homes. Based in Marin, Ticknor’s organization has been teaching young adults how to build tiny homes from scratch to completion since 2019.

“I was on job construction sites and all the various contractors were looking for skilled workers and had high-paying jobs open that were going unfilled,” says Ticknor, who started a design consultant business in 2009. Harboring a love for both building and teaching, he decided to help fill this labor gap by creating Big Skills Tiny Homes, providing young folks an opportunity for hands-on learning and empowering them to identify future career paths, all while starting and finishing a meaningful project.

“The tiny home is perfect because you get to try everything in a small period of time,” he explains, adding that it takes about 600 hours of skilled labor to build one. “It’s a perfect medium to try all the trade disciplines in a reasonable amount of time.”

To maintain a small teacher-to-student ratio, Ticknor only accepts four or five students each year and teaches them himself, although guest speakers are occasionally brought in. The program also attracts young women, historically underrepresented in the industry, who are as eager to learn these skills as their male counterparts. Ticknor credits the tight-knit-group feeling to the program’s success: “We’re very proud to boast 100 percent graduation rate and zero dropouts,” he says. The program lasts nine months, from September to May.

Ticknor and his first cohorts completed their initial tiny house in May 2020 with the intention of auctioning it off at a big event, a plan that was disrupted by the pandemic. The auction took place online instead and Ticknor decided to move things in a different direction.

“I started Googling ‘tiny homes for good causes’ and would approach the places I found,” he says. One such place was Youth Spirit Artworks in Oakland; Ticknor’s team also built a tiny house for Butte County, which was devastated by wildfires. Currently, Ticknor and his students build one to two tiny houses per year — two if the builds are simple, one if it’s more complex. But the students take on every aspect of construction, including electrical, plumbing, tile, drywall, painting, cabinetry, roofing, siding and even some furniture building. Many of Ticknor’s students aspire to advance further into the trade, but they’re not obligated to continue down that career path if they find it’s not for them. However, they’re all required to learn how complete every single aspect of the construction process.

“By virtue of trying new things, they’re learning about themselves over and over,” says Ticknor, adding that a surprising benefit of the program has been the personal changes that many students have said they’ve experienced while participating. “People have talked about coming out of their shells, gaining confidence, being able to communicate and work in a team. For some students it was night and day, almost a different person.”

The current program is small by necessity and only open to those 18 and older, but Ticknor is hoping to soon bring the program to Marin high schools with the students participating in the construction of the tiny homes on a smaller scale and learning from the full-time cohorts. “I would like to see more people have this opportunity,” he says. And while his primary mission is education, the group loves the added bonus of providing a home for someone who needs it. “If you build the builders, the builders will build, and then we’ll end up with more than what we have now.”