A New Home Is in the Works for Marin Shakespeare Company 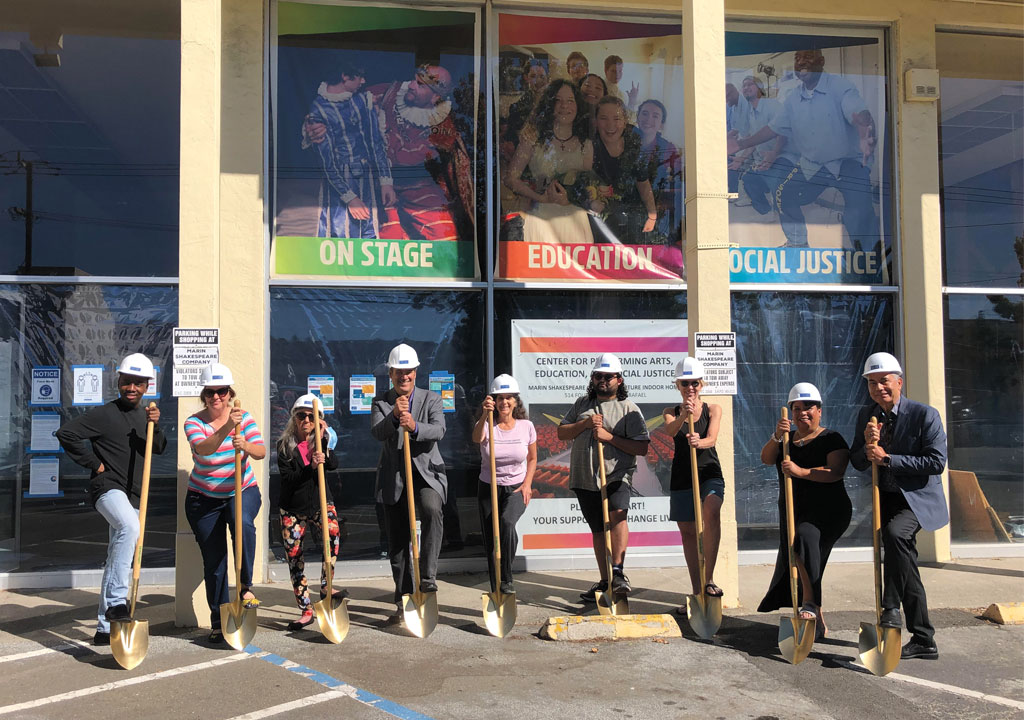 Macbeth had to deal with a power-hungry wife and King Lear with power-hungry daughters. Marin Shakespeare Company (MSC) managing director Lesley Currier only has to deal with another kind of power while overseeing the long-awaited completion of MSC’s new performance center in downtown San Rafael.

“We’re waiting on PG&E,” she says, knocking on wood — a wooden beam inside the former Heller’s for Children building at 514 Fourth Street. “Once they give us additional electrical capacity, we can open the Center for Performing Arts, Education and Social Justice in October.” It will be the final act in a drama that began when she and her husband, artistic director emeritus Robert Currier, purchased the building with a $2.1 million anonymous donation in 2017.

The theater company is best known for the Shakespeare plays it’s staged every summer since 1990 at Dominican University’s Forest Meadows Amphitheatre, which underwent nearly $1 million in improvements in 2020. No productions were staged in 2020 or 2021 due to Covid, but Emilia (July 2–August 7) and Twelfth Night (August 26–October 2) are slated this year. But it’s the new indoor performance center — five blocks from Dominican and painstakingly renovated over the last five years — that excites Currier, because events and programs can be offered there year-round.

“We have only operated from our house,” says Currier, “where we’ve also had to store all the costumes — even under our kids’ beds. This building is necessary so that the company can live beyond us.”

Despite supply-chain and Covid-related delays, plumbing issues and ballooning costs ($5.5 million) that force Currier to admit that they’ll be fundraising “forever,” most of the infrastructure work is now complete. A large upstairs room is filled with thousands of costumes and props ranging from military uniforms and swords to hippie outfits and a wizard’s staff. Still unfinished are the lobby, box office, catering kitchen, classrooms, greenroom, dressing rooms, offices, restrooms, LED lighting and 165-seat performance space.

Currier envisions many uses for the building, most of them in keeping with MSC’s slogan and operating principle: “Playing for Good.” Participants in MSC programs include inmates in 11 California prisons (including San Quentin), ex-cons in the Returned Citizens Theatre Troupe, kids in after-school and weekend drama classes, and military veterans in acting classes. It’s all part of MSC’s social justice mission. As Currier explains: “We use theater to heal the world and make it better.”

The new center will welcome not only all kinds of people but all art forms, from art exhibits to music and dance performances. Currier hopes the building’s 17-foot-high windows will cause passersby to take notice while performances are underway. “It will be the newest jewel among the arts organizations on Fourth Street,” she notes with pride. While Mill Valley’s Marin Theatre Company focuses on new plays, she says that MSC will continue to present Shakespeare and experimental theater.

All theater has suffered during Covid, especially local nonprofit theater like MSC, so building a new indoor performance venue during a time when no one has been attending indoor performances was as risky as Romeo’s decision to court a Capulet. Many theater professionals and actors have moved away or taken “real” jobs, Currier laments, and she’s not sure how many will return. But she is an optimist who, as Romeo would put it, focuses on the light that “through yonder window breaks.”