Why Sensei Porcupine Creek Should Be Your Next Wellness Getaway 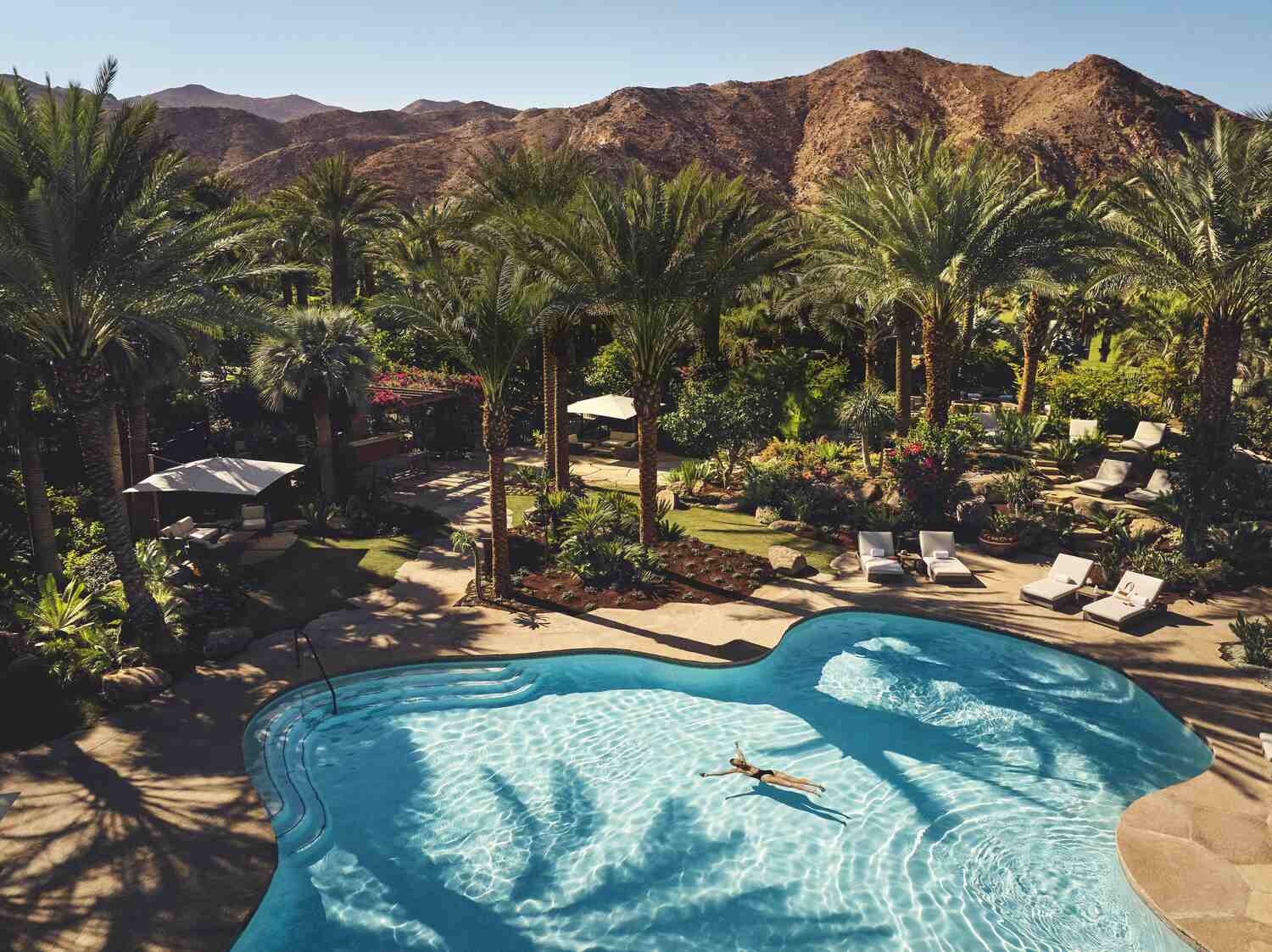 As I passed through the tall wooden gate of Sensei Porcupine Creek (from $1,415 per night single occupancy with a two-night minimum), a new wellness retreat at the base of the Santa Rosa Mountains in Rancho Mirage near Palm Springs, a man waiting at the entryway encouraged me to roll down my window and “breathe in the sights and sounds” as I made my way up to the resort’s Estate House. The babbling sound of water, the fresh plumeria-perfumed air and lush green landscape — an emerald green golf course peeked out from behind 40-foot-tall date palms and floss silk trees with hibiscus-like pink flowers — immediately put me at ease.

I had come to Sensei Porcupine Creek in search of a more mindful health and fitness routine. My busy life had made workouts sporadic, and I yearned to be active like I once was. Sensei seemed like the right place to begin making changes. It was created by Oracle co-founder Larry Ellison and Dr. David Agus, a leading physician and scientist who makes frequent appearances as a contributor on CBS News. The loss of a close friend brought the two men together on a path to form an evidence-based wellness brand that might truly help people live longer and healthier lives. Sensei Porcupine Creek general manager Julie Oliff, who worked for several luxury hospitality companies before Sensei, confessed to me that she pursued the brand persistently before getting hired.

“I was looking for something with a higher calling. That’s what we do, ‘luxury with a mission,’ ” she says. Sensei Porcupine Creek opened on Ellison’s former private estate, a 230-acre property with an almost mythical reputation, in November. Hikers could see what certainly appeared to be a mirage planted with more than 4,000 palm trees from the popular Santa Rosa Mountain trails above, but never enter. It was invite-only, and tennis players like Rafael Nadal have played on the clay and hard courts built to match nearby Indian Wells Tennis Garden’s professional courts, and presidents have reportedly played on the stunning 18-hole golf course. Palm trees — there are more than 30 varieties at Porcupine Creek — that are past their prime are simply moved but never discarded, and the golf course has more blades of grass per square inch then Augusta. “I went to University of St Andrew’s in Scotland, and that’s the holy grail of golf, but this golf course has a soul,” says Oliff.

Sensei Porcupine Creek offers retreat packages ranging from two-night stays to longer five-night Optimal Wellbeing Retreats and 30-day long sabbaticals. More in-depth experiences begin with a My Intention session where a Sensei Guide discusses a guest’s well-being goals and collects baseline markers like blood pressure and body composition and does a functional movement screen. My guide, Nick, an upbeat physical therapist certified in strength training and conditioning whose smile seemed to begin at the corners of his eyes, explained the Sensei philosophy of Move, Nourish and Rest are the three key pathways to establishing a healthy lifestyle. With a large graphic showcasing the paths on a screen, he described how one can have a “domino effect” on the others in both good and bad ways. He asked if there was one that was more of a catalyst for me, and I struggled to answer. I landed on “Rest” as being the most important, explaining that if I didn’t get enough sleep, I could be more sluggish and prone to eating poorly and skipping workouts.

While I’m not a morning person, I woke up the next morning at 6 to join Nick for a hike. We started by doing some basic movement like flexing and circling ankles, a step I nearly always skip. We trekked up a steep trail to a lookout point where we could take in views of the Coachella Valley before heading back down. I felt energized at breakfast; the smooth cup of coffee and bright avocado toast with fluffy egg whites sprinkled with za’atar seemed a worthy reward for my early morning efforts. In the afternoon I did a rigorous vinyasa flow class in a light-filled yoga pavilion next to the swimming pool, but the yoga instructor told me even short yoga and meditation sessions several times a week would help me establish a meaningful practice. After an omakase-style dinner at the Sushi Bar — Sensei’s menus are a collaboration between Dr. Agus and chef Nobu Matsuhisa, whose celebrity-beloved brand is known for blending Japanese and Peruvian cuisine — my eyes fluttered into sleep around 9 p.m., and I slept soundly and deeply.

The next day I had a VO2 Max assessment with Nick to evaluate my heart rate baseline and maximum, which I hoped would help me understand my fitness level and ways to improve. I wore a heart rate monitor and breathing apparatus hooked up to a high-tech Cardio Coach device and ran on a treadmill until I reached my anaerobic threshold — the highest sustained intensity of exercise for which oxygen uptake accounts for the entire energy requirement. I went from a brisk walk to sprinting and was breathing heavily when I reach my threshold at around six minutes. My results showed that my body used oxygen efficiently and was able to quickly recover. Nick explained, “Once your body has been there, it doesn’t have to work so hard to get back.”

Sensei Porcupine Creek is the first retreat to be fully operated by Sensei. It’s more intimate than Sensei Lanai, A Four Seasons Resort, Agus and Ellison’s first retreat, which opened on the Hawaiian island in 2019 with just 22 accommodations including guest rooms, casitas and villas. Low-slung buildings feel vaguely Tuscan on the exterior (terra-cotta tile roofs and stone walls), but more contemporary in the interior with high ceilings, hardwood floors and neutral cream and ivory textiles and furnishings.

While the Sensei Way is effective, it isn’t extreme or trendy. There is no green juice on the menu (Sensei experts say research shows juicing strips out vital fruit and vegetable fibers). Menus can be customized but there isn’t a strict detoxing focus. “Everything in moderation” seems to be the Sensei motto and its superpower.

During my retreat there were many opportunities for nourishment, from the light-yet-flavorful meals (melt-in-your-mouth toro carpaccio with capers and rib-eye sliders with Maui onions and honey truffle aioli were a few highlights) as well as mindfulness sessions like a sunset open-air meditation and rejuvenating spa treatments. During a gua sha facial a therapist rhythmically massaged my face with a cool rose quartz tool used to drain my lymphatic system and lift skin. The sublime Calming Body Cocoon began with dry brushing. Then my therapist massaged sweet and earthy scented melted sandalwood wax into my skin. While wrapped in blankets and towels with a soft heating pad on my stomach, I slipped into a deep state of relaxation. The thought-provoking art on the property also feeds the soul, including Robert Indiana’s “ONE through ZERO,” composed of 10 brightly colored six-foot-tall numbers representing the stages of life — the work’s intent is to encourage guests to ponder and enjoy every stage.

During my final session, Nick asked me if I had a better sense for which pathway was my first domino and I said without hesitating, “Move.” It was clear that movement was essential in helping me establish healthier habits in all areas. It helped me sleep and eat better. The retreat had helped change my perception of what a workout could look like, and I realized more consistent but moderate movement — stretching for 10 minutes in the morning or a 30-minute jog at a moderate pace — were healthy and attainable goals for me to set.

When I got home, I enjoyed the weekend with my family, but also made an appointment to do a Sunday morning Pilates class, something I would have easily put off in the past. After class my mind felt clearer and my mood was elevated. I knew I had what I needed to tackle the busy day ahead.