Vitidore Is Tackling Climate Challenges One Vineyard at a Time 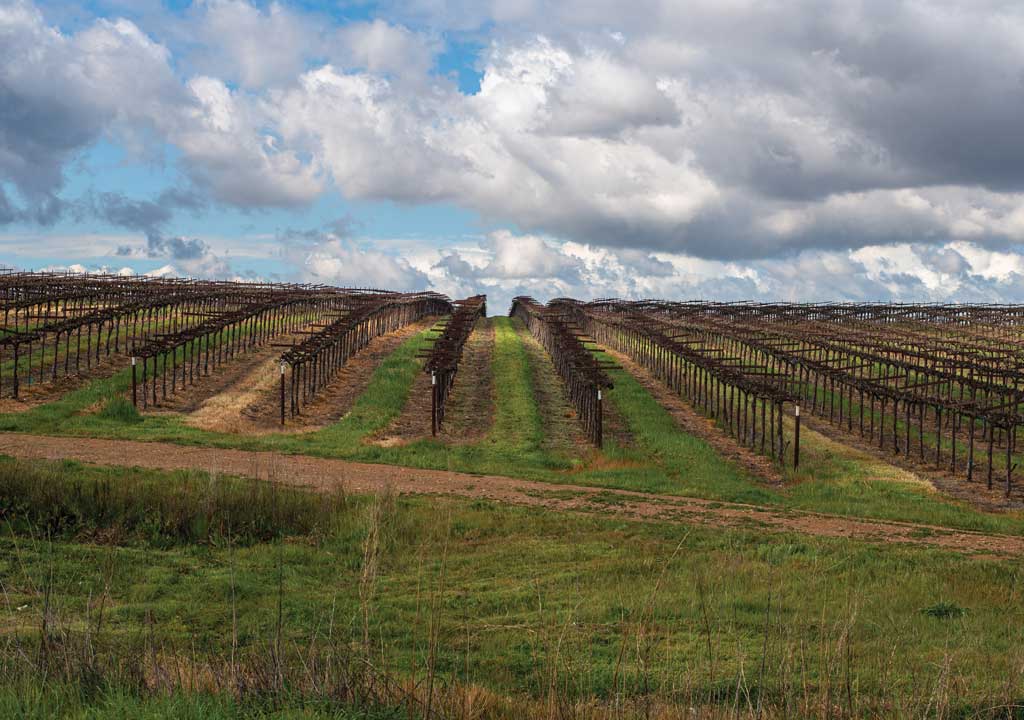 Contoured rows of grapevines and orchard trees pattern landscapes just north of San Francisco. Along with the picturesque hillsides and valleys, however, comes an agricultural challenge: “In a vineyard and nut orchard, 50 percent of the land that’s planted is not usable. There’s the vine rows and anything between that is just an alleyway,” says John Knutson, vice president of solutions at ag-tech startup Vitidore.

Beyond the disuse and lack of generated income from interrow spaces in vineyards and orchards, these soils are also prone to degradation, adds Alyssa DeVincentis, director of science and technology at Vitidore. “Soil is really a living breathing thing, so when it isn’t covered in something it is vulnerable; it’s exposed to the elements.”

Vitidore’s mission is based around finding a solution to this land waste — and the key ingredient is Oakville bluegrass. For Knutson and the Vitidore team, cover (or conservation) crops, such as Oakville bluegrass, can help to vegetate the unused land with benefits for soils, crops, climate and farmers.

In 2015, after years working with turf grasses for managers of sports fields and city parks, Knutson saw an opportunity to bring certain hybrid cultivars of the grass Poa bulbosa, trademarked by Vitidore as Oakville bluegrass, to the Bay Area. The grass, the product of around 20 years of plant-breeding efforts, was originally intended for golf courses; however, it boasts traits that make it a good cover crop for vineyards and orchards. The cover crop is a perennial (not requiring yearly planting or tilling), does well with limited water, and, most important, grows in seasons opposite to plantings in vineyards and orchards. Given these characteristics, the grass can be advantageous for soils, but then predictably go dormant just as crops start to grow so it is not competing for resources and water.

Now, working with local farmers across nearly 150 acres of land and a growing list of wineries such as St. Helena’s Clif Family Winery and Whitehall Lane, Vitidore is observing the benefits of Oakville bluegrass, including positive impacts on weed control, dust reduction and carbon sequestration. Beyond potential improvements to soil health and crops, the product can help move carbon, a greenhouse gas, from the atmosphere to soils. As such, Vitidore is also building technology to rigorously monitor, report and verify carbon offsets that accompany the planting of Oakville bluegrass on agricultural land. Farms that use and plant the cover crop will have a streamlined process via Vitidore’s technology to earn carbon credits that can be sold in the carbon credit market to parties looking to offset their own carbon emissions. Through this process, Vitidore seeks to help farmers generate income from otherwise unused land.

While Vitidore’s technology is still in development, Knutson, DeVincentis and team are enthusiastic about the potential for a small grass to change agriculture in California and beyond. Marin County provides motivation for them. “A lot of the things that we do have come from thinking from the Marin Resource Conservation District (a local land-stewardship organization),” says Knutson of the longtime contribution of Marin initiatives to carbon farming. And, of course, the Bay Area’s interest in technological solutions adds to the mix. “Agriculture is this slow, very ancient activity, and then technology is at the other end; it is fast and furious,” says DeVincentis. “It’s really interesting that those two things come together in this area of the world. I think it’s pretty special.”

This fall, the 2022 red and rosé wines from Sequum Wines in St. Helena will be the first vintages produced in a 100 percent Oakville bluegrass vineyard. Surely this wine will be put to good use in a Vitidore toast to both a very small grass and the very big aspirations of positive environmental change.