Thrill Seekers Will Love These 5 Via Ferrata Adventures 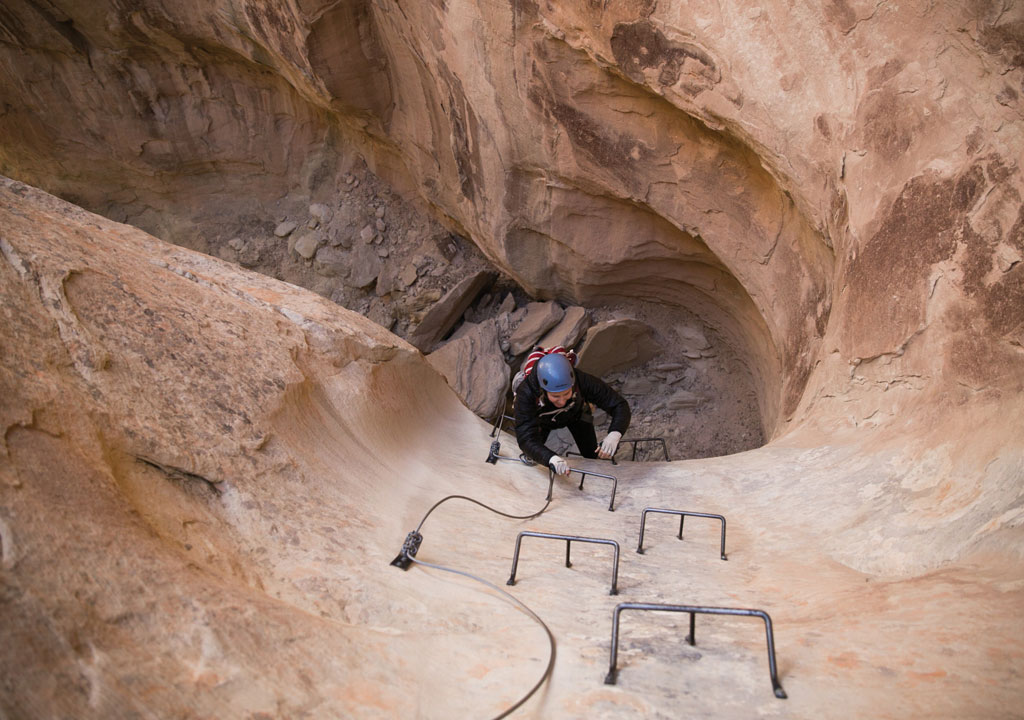 Courtesy of Amangiri
by Casey Hatfield-Chiotti

“Breathe, relax, have fun,” I repeated to myself like a mantra as I peered out at the cathedral mesas and the suspended pathway of cables and steps in front of me and tried desperately not to look down. I was about to cross the Cave Peak Stairway, a 200-foot-long aerial staircase suspended 400 feet above the canyon floor, at Amangiri luxury resort (from $3,000 a night) in remote southeastern Utah. My guide, JJ, who always seemed to be sporting a wide grin, had given me sage advice before he crossed: “There’s going to be bounce; that’s physics. Just take a deep breath and relax. It’s beautiful.” I tried to keep this in mind as I began to cross the 120 steps with nothing in between them but air.

The Cave Peak Stairway is part of the Cave Peak Via Ferrata Trail at Amangiri. I had been on via ferratas in Europe, but never in the wild, awe-inspiring landscapes of the American West. Via ferrata is Italian for “iron way” and is a system of metal ladders and cables developed in World War I to move troops through the Alps. It’s like rock climbing but safer. Climbers wear helmets and harnesses and are clipped into cables using auto-locking carabiners and lanyards — and therefore connected to the rock — 100 percent of the time.

Before my husband and I, who had come to Amangiri for a much-needed weekend away from our busy lives, went across the staircase (the longest of its kind in the Northern Hemisphere), we wound our way up the spine of the Cave Peak Mesa, clipping, climbing and talking with JJ as we went along. “It’s mental, it’s physical, but as long as you don’t have a crippling fear of heights, you can do it,” he told us. We later learned JJ had traversed at least 1,500 routes in the U.S. and been a guide for everyone from celebrities to royalty. He told us about Amangiri’s unique year-round via ferrata program for hotel guests. There are routes ranging from the beginner-friendly Canyon Crossing Via Ferrata, which is designed for families, to the intense Red Line Ridge route.

This is the brilliance and appeal of the sport. It makes climbing a big cliff accessible to people with no prior climbing experience and explains why these routes — still a popular way to experience the Dolomites in Italy and the French Alps — are increasingly available in the States. The Larkspur-based investment group that owns Amangiri wanted to offer unparalleled outdoor experiences, so they helped create Adventure Partners, an independent outfitter company run by expert outdoorsmen, along with the resort. They were the first to build a via ferrata on private resort property about a decade ago, and they have expanded Amangiri’s program steadily. Adventure Partners has also installed dozens of via ferrata routes around the U.S., including at Jackson Hole Mountain Resort. Other luxury hotels and ski resorts from Alaska to California have followed suit.

Near Four Corners and Grand Staircase Escalante and a four-hour drive from Las Vegas (the closest airport is in Page, Arizona), Amangiri feels like a national park. It sits on 920 acres of red-rock country and Colorado Plateau. Amangiri’s modernist design blends in so seamlessly with the landscape that I couldn’t help thinking it looked like a billionaire’s lair out of a James Bond film. After a day of adventuring (the hotel also offers horseback riding, myriad hiking trails, trips to the nearby national parks and more), guests can unwind in the spa, which features Navajo healing traditions like flotation therapy in near darkness and crystal sound bowl healing. Visitors can also take a dip in a swimming pool that winds around a rocky outcropping and participate in activities like a wildlife workshop. One night I got to hold a beautiful and curious boa constrictor who was the same dusty gold shade as the desert’s sculpted sandstone. Dinners by the crackling fire at Amangiri or Camp Sarika, the hotel’s luxurious glamping accommodation that is a 15-minute walk from the main resort, are just icing on the cake. There’s a reason Amangiri is a favorite of everyone from Silicon Valley CEOs to Hollywood A-listers.

“It’s all alpha males and females. So, I have to tell them to slow down,” said JJ. Back at the staircase, I pushed the carabiners with my hands, which were fixed to my harness with two blue lanyards, as I had been instructed to do, and slid them along the wire cables on either side of me as I took each step. Each time I came to a bolt on the cable I removed the carabiners one at a time, so that I was always attached on one side. Hearing the rhythmic “click, click” gave me some comfort as I made my way methodically across the ravine.

When we were all safely on the other side, we stopped for a moment to feel the warm Utah sun on our faces before climbing down steps bolted to a cool, steep pale purple and green striped canyon wall. After we plopped down on solid ground and began our hike back to the resort — where a prickly pear margarita and large guest room with an outdoor lounge and fireplace awaited — I thought about something JJ had said as we began our approach: “I’ve done this route 300-plus times, and I can count the bad days on one hand.” I hadn’t felt this exhilarated and alive in a long time, and I could not wipe the smile off my face.

Tahoe Via Ferrata
Tahoe Via Ferrata (from $119 per person) opened at Palisades Tahoe Resort in 2018 and has serious big mountain cred. It’s operated by Alpenglow Expeditions, an international mountain guiding service that leads trips on every high-altitude peak in the world, including Mount Everest. The Tahoe routes wind their way up the Tram Face, a granite slab that is not ideal for technical rock climbing but is perfect for a via ferrata. Climbers choose between a two-, three- or four-hour tour and routes include steep and technical to fun rock scrambles. All have impressive Olympic Valley views. Tahoe Via Ferrata’s season is typically May through September. Visitors can stay at the Village at Palisades Tahoe, but you don’t have to be a guest to do the via ferratas.

Vermejo, a Ted Turner Reserve
Ted Turner’s Vermejo resort (from $1,800 per night) spans 558,000 acres in northern New Mexico and offers unfettered access to nature, including animal sightseeing tours, fishing and a brand-new via ferrata route. Open this spring, Vermejo’s year-round via ferrata is a combination of ropes course and rock climbing with balance-beam walks, a swinging-bridge crossing and a rock prow traverse almost 30 feet off the ground. Animal excursions to spot bison roaming free and pronghorn antelope are like going on a safari closer to home. Vermejo has a variety of accommodations, including Costillo Fishing Lodge and a 1900s mansion with seven luxurious guest rooms.

Jackson Hole Mountain Resort
Open since 2017, Jackson Hole Mountain Resort’s (from $450 for up to two people) via ferrata routes take guests on a high alpine journey above the valley floor across suspended bridges and along granite walls. There are routes for beginners as well as professional climbers, and the season runs through October 9. Visitors might choose to stay slope-side at the resort’s eco-chic Hotel Terra or the more luxurious Four Seasons Resort, or in town at the new modern motor lodge, The Virginian.

Tordrillo Mountain Lodge
Olympic gold medalist Tommy Moe and heli-ski pioneer Mike Overcast, the owners of the luxe Tordrillo Mountain Lodge (from $8,500 per person for a three-night trip), had Alaska’s first via ferrata on state land installed in 2018. The four-hour-long route, available June through September and a short helicopter ride from the lodge, has views of the Triumvirate Glacier and a volcano. Overcast says via ferratas have low environmental impact but leave a big impression on guests looking for meaningful travel experiences. “Every one of our guests who did the via ferrata said it was life-changing,” he said. Other enticing summer activities at the lodge include heli-skiing (available through early July), fishing for Alaska king salmon, hiking, biking and boating on Judd Lake.