These Tips Make #VanLife Easier and More Stylish Than Ever 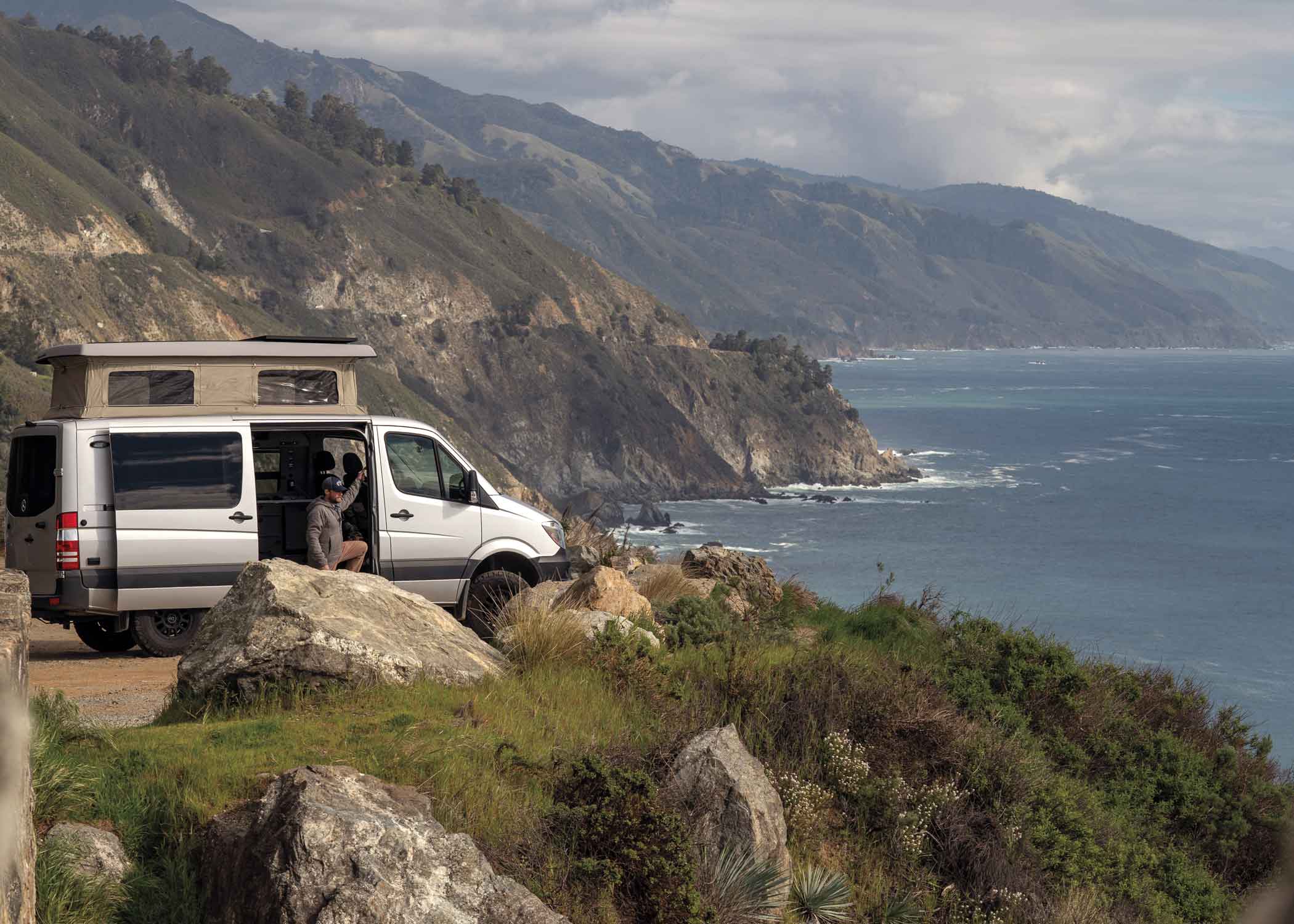 For many, the words “recreational vehicle” might conjure up images of people in their sunset years traversing the country in oversize tan motor homes, stopping at sparse RV parks along the way. Today’s RV landscape, which includes everything from vintage Airstream travel trailers to kitted-out Mercedes-Benz Sprinter vans, is vastly different and in demand, says Jen Young, the co-founder of Outdoorsy (from $58 a night for smaller vehicles like teardrop trailers and $120 a night for campervans and RVs), the Airbnb of trailer and campervan travel.

“More than ever, people are craving disconnection and distance from the modern world and a reconnection to the natural world,” says Young. A survey conducted by OnePoll found two-thirds of respondents are more inclined to rent an RV, campervan or trailer now than before the pandemic started.

Young and co-founder Jeff Cavins saw the benefits long before the start of the pandemic. They left high-powered jobs to found Outdoorsy in San Francisco six years ago. Like with Airbnb, you enter the dates you want to travel and choose a locally owned trailer or van for rent, and the nightly fee will pop up. While they moved the company headquarters to Austin, Texas, in 2018, Cavins and Young still spend a lot of time in the Bay Area. Outdoorsy has many successful recreational vehicle owners who rent in both Marin and San Francisco.

“The Bay Area is the perfect base camp to start an RV adventure. There’s such a variety of rich landscapes and nature within easy driving distance whether you’re looking for a quick weekend getaway or a longer sojourn,” says Young. One of her all-time favorite campgrounds within driving distance of Marin is Kirk Creek Campground in Big Sur. “The views are unmatched,” she says.

Whether you decide to rent, buy or go on a curated trip, here are three Marin itineraries that include some Outdoorsy-approved spots.

If you like towering trees and coastal views, try this itinerary that starts with a drive up Highway 1 along Sonoma’s rugged 55-mile-long coastline. Stop to admire Bodega Bay before spending the night at Timber Cove Landing & Campground, which has first come, first serve RV and tent camping on a calm cove with fishing, diving and a boat launch. The posh Timber Cove Resort is nearby if you want to make a reservation at the hotel’s excellent Coast Kitchen.

Redwood National Park, six hours north, should be your next stop. Plenty of recreational vehicle–friendly campgrounds surround the park, famous for protecting some of the tallest and oldest trees on earth, including Gold Bluffs Beach, with views of the Pacific (note this campground is not suitable for trailers and no electrical hookups are available), and the Redwoods KOA in Crescent City, where there are full hookups.

From Crescent City, head north on the Route 199. Consider a slight detour to Oregon Caves National Monument & Preserves, which has underground marble passageways and old-growth forests, on your way to Crater Lake National Park. One of America’s deepest lakes, Crater Lake is a deep sapphire blue, and the Mazama Campground has 200 sites for tent, trailer and RV camping. On your way back south, stop in Ashland, Oregon, a college town known for its excellent restaurants and summer Shakespeare festival. Near Redding, you won’t want to miss a gem of a campground, Castle Crags State Park Campground in Shasta-Trinity National Forest. The campground has 64 RV and tent campsites with grills and picnic tables.

This more mountainous, high-elevation itinerary begins with a stop in Lake Tahoe at the Outdoorsy-approved Lake Tahoe Valley Campground. The place is more like a resort than a campground, with a swimming pool, clubhouse and Wi-Fi, and it’s near South Lake Tahoe’s beaches and Emerald Bay. It’s just a few hours from there to Rye Patch State Recreation Area in a remote area of Nevada where early humans reportedly thrived in prehistoric times. It remained largely isolated until the California Gold Rush, and today the state recreation area, with an 11-mile-long reservoir, is popular for fishing, boating, swimming and recreational vehicle camping. In Wells, Nevada, stop at Bishop Creek Hot Springs, a 40-foot-long man-made pool fed by a 105-degree spring. Recreational vehicles are allowed in some campsites at the stunning City of Rocks National Reserve, a national reserve in Southern Idaho known for rock spires, excellent rock climbing and hiking. The final stop on this one-way itinerary is at Jackson Hole and Grand Teton National Park, which has many excellent campsites and RV parks and majestic scenery.

Your destinations in this adventurous itinerary are Utah and Arizona’s red, rocky landscape. Preferably with an off-road camper model, head to Mammoth Lakes, which is just as fun in the summer as the winter, and explore Kings Canyon National Park to (hopefully) escape some of Yosemite’s crowds. The Tioga Gas Mart and Whoa Nellie Deli in Lee Vining at the corner of 395 and 120 is the most idyllic gas station you’ll ever visit; it has views of Mono Lake and Dana Plateau and serves house specials like wild buffalo meatloaf and mahimahi fish tacos.

HipCamp, a company specializing in camping, RV and glamping bookings, has lots of campsites to recommend in the Dixie National Forest in Utah. Check out Grand Staircase–Escalante National Monument and drive along Hell’s Backbone, a windy route that follows ridges and mountain contours on your way to the remote hippie town of Boulder, Utah. The town has an excellent farm-to-table restaurant called Hell’s Backbone Grill. Embrace Nomadland life and find a spot on the Bureau of Land Management (BLM) land on the north rim of the Grand Canyon. It’s typically OK to camp a mile off paved highways on BLM land for free. Cut down travel time by flying in and out of Las Vegas and renting at one of the dealerships there.

Whether you rent or buy, here are some unique ways to embrace modern RVing.

XGRiD
This company matches clients with the off-road camper that is right for them. Manufacturers have designed off-road campers to go through ravines and over rocks, but these adventure base camps can still feel like a “hotel on wheels,” with full bathrooms, bamboo dressers and gleaming stainless-steel sinks. Rentals are available for pickup and drop-off at their Las Vegas location. If you purchase a camper, it can be delivered to you. From $120 a night.

Living Vehicle
The Aston Martin of trailers: this Santa Barbara–based company, owned by an architect and his wife, creates custom trailers that are more like luxury apartments, with spa bathrooms and chef’s kitchens. The vehicles can also go off road.

Happier Camper
This trailer company, specializing in cute, ultralight custom travel trailers, has a showroom at Proof Lab Station in Mill Valley. The brand-new HC1 is on display.

Moterra Campervans
The Jackson Hole–based company customizes itineraries for people who want to travel in luxurious Sprinter vans that can be picked up in San Francisco. One-way trips are possible and include Big Sur, the California coast and the Sierra ranges. From $339 a night for vans and from $4,399 for package itineraries that include the rental and cleaning fee, prebooked campsites and a dedicated expert to work with you on your itinerary.