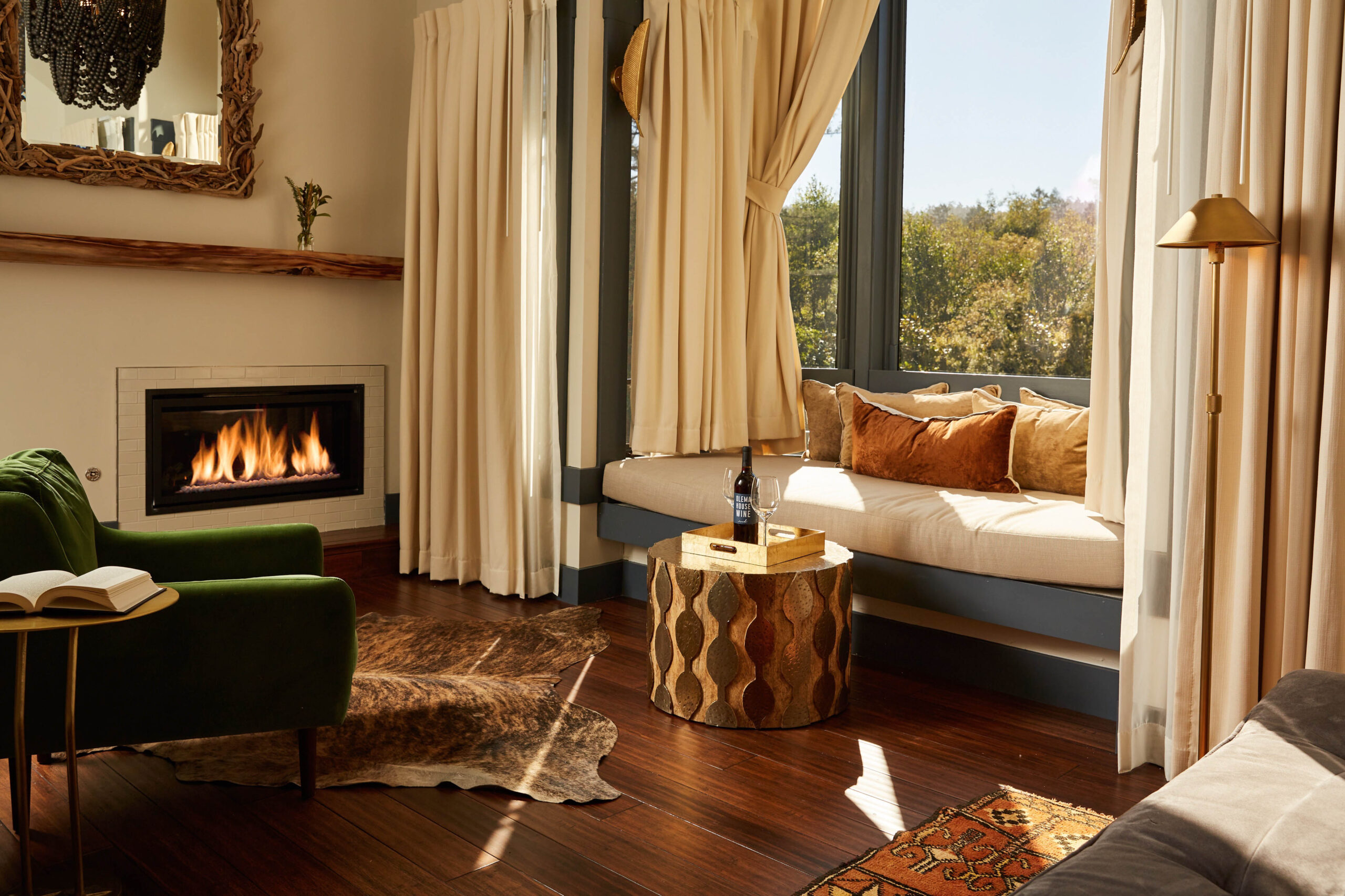 With large gatherings off the table and many states enforcing travel restrictions, it’s not going to be the same holiday routine this year. If you are sticking closer to home, that doesn’t mean you still can’t do something festive. Marin County’s hotels and vacation rentals, located in the county’s most stunning natural settings, have reopened and are welcoming visitors with new safety protocols in place, but with the same warmth and hospitality as before. Whether you need a romantic staycation on the water or a large, homey house for relatives, here are some options.

Fresh off of a modern makeover, Point Reyes’ lauded Olema House (from $275) has a new lease on life. The renovation mixed contemporary elements and natural materials: an oversize starburst chandelier now dangles from the lobby’s lofty pitched ceiling, while a new gas fireplace in the lounge sports Heron Blue tiles from Heath Ceramics. Accommodations, including loft-style apartments and private cottages, have been outfitted with reclaimed wood furnishings and heated floors. Surrounded by national forest; hiking, biking, birding and kayaking are in easy reach.

The Inn Above Tide

There isn’t a bad room at Sausalito’s luxurious Inn Above Tide (from $425). All 33 rooms and suites have floor-to-ceiling sliding glass doors leading to furnished private decks with panoramic views of the city skyline and Angel Island. If you splurge for the 800-square-foot penthouse, which has a freestanding spa bathtub with bay views and a sitting area with a woodburning fireplace, you may want to move in permanently. If you decide to venture out, it’s just a quick stroll to the art galleries and restaurants in town.

This bucolic vacation rental near Marshall includes a 150-year-old farmhouse and 166 acres of organic farmland; heifers graze in the fields behind the elegant white house (from $995) with room to sleep 10. The Straus family has been farming the land since 1941. One of the sons owns Straus Family Creamery, and while the ranch and dairy are separate businesses, guests have been known to find Straus creamery delights in the fridge. Guests have various activities at their fingertips: walking to a small beach for tide-pooling and kayaking or hiking the Tomales Point trail across the bay. But the well-equipped house, with its open kitchen, garden patio with barbecue, and a Steinway from 1910, has plenty of features to entertain you.

Originally a 19th-century saloon, this Tomales landmark opened as a small inn and restaurant in 2018 (from $275). Owner Ted Wilson, who offered shelter to evacuees during the recent fires, ripped up carpets to reveal Douglas fir plank floors from the ’20s and added four guest rooms — including a large family suite — furnished with wrought iron beds, leather lounge chairs and vintage light fixtures. Restaurant and bar service has been moved to the patio for the time being, but the satisfying cuisine, courtesy of chef Austin Perkins, who formerly cooked at Nick’s Cove, remains top-notch. After exploring local creameries, hidden beaches and oyster farms, guests can tuck into a hearty meal like a bread bowl filled with seafood chowder.

During the holidays, William Tell House will also be taking pickup orders for Thanksgiving smoked turkey ($125) and Christmas prime rib or rack of lamb ($160) that serve four to six people.

Located in Tiburon, and the only hotel in the area that sits directly on the San Francisco Bay, Waters Edge (from $237) has scenery in spades and a central location in the middle of the walkable downtown. The 23 guest rooms have nautical-patterned pillows and crisp white bedding, and each has a fireplace and soaking tub. The hotel provides plenty of personal touches: breakfast delivered to guest rooms each morning and freshly baked cookies each night. But the complimentary wine offered each evening near a firepit on the Grand View deck is staycation perfection. On a sunny winter day, pick up picnic provisions at Rustic Bakery and Woodlands Market to take to Angel Island State Park. The ferry to the island leaves from the dock behind the hotel.

Located on the Mount Tamalpais ridgeline and surrounded by old-growth redwood forests and mountain peaks, Mountain Home Inn (from $179) is one of Marin’s most romantic hotels and a hiker’s paradise; Muir Woods National Monument, which has six miles of trails, borders the hotel. The inn was built by a Swiss-German couple in 1912 who were homesick for the Alps. The grand lobby inspired by National Park hotels of the 1930s was added in the ’90s. The inn, which has 10 rustic guest rooms, some with four-poster beds and vaulted wood ceilings, is known for its hearty breakfast fare like buttermilk pancakes and ham and onion hash.

Sandpiper Lodging at the Beach

This motel on Highway 1 (from $185), with 100-year-old redwood cabins and guest rooms with kitchenettes, gas fireplaces and queen beds with warm duvets, is a cozy place to hunker down during a winter storm. When the weather’s fine, there’s also a private garden, barbecue and picnic areas. The hotel is just a few minutes away from Stinson Beach, a gently curved swath that stretches for three miles. Muir Woods, Bolinas, Mill Valley and Point Reyes National Seashore are all a short drive away.