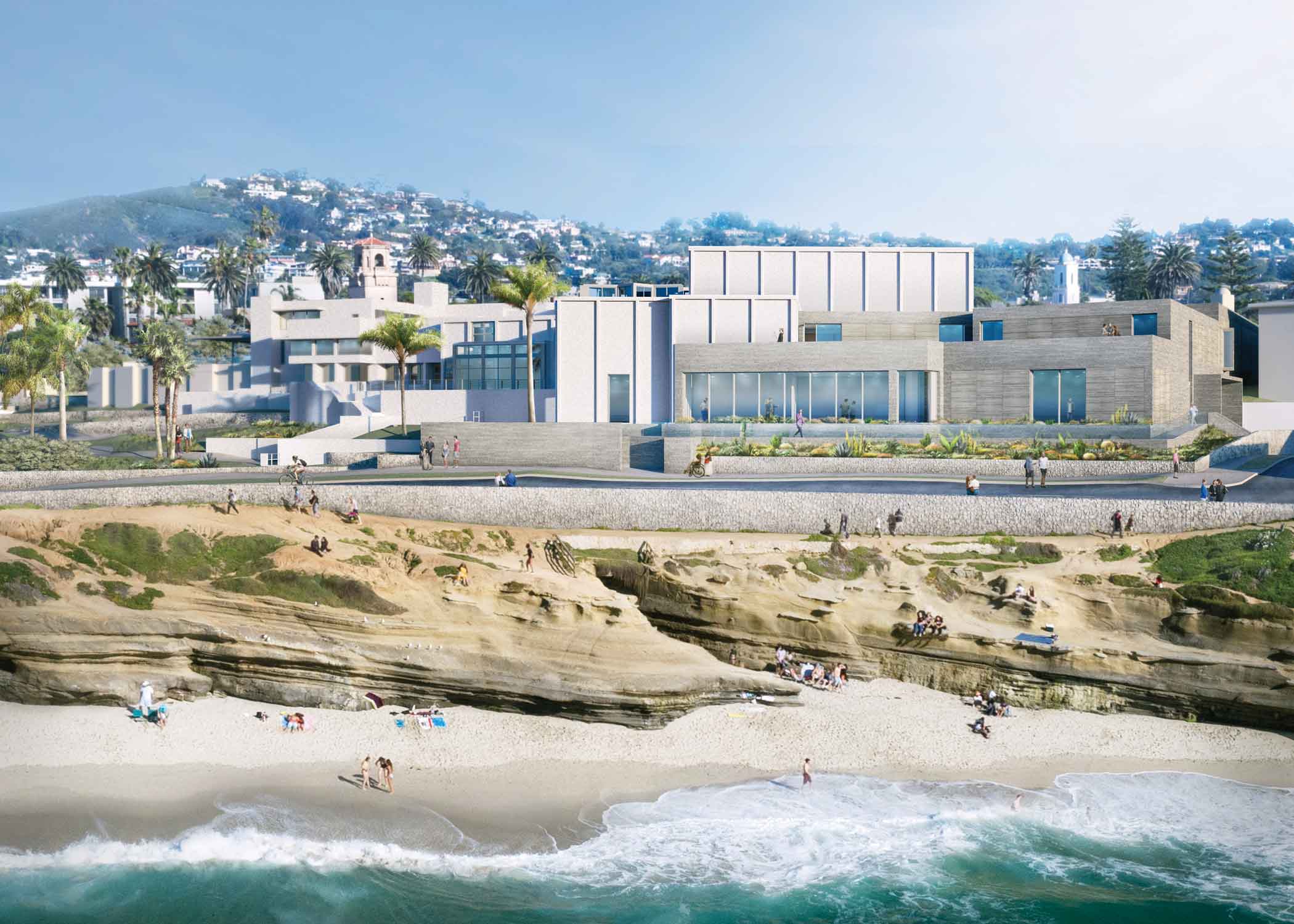 Known for its surf culture and plenty of endorphin-releasing sunshine, San Diego has always been a popular spring break destination. While beach bonfires and sunset strolls on the boardwalk are all well and good, the city increasingly has more to offer, not just for beach lovers and families (who come to frolic in the waves and visit Legoland and the San Diego Zoo), but culture hounds as well. Interesting architecture, artsy neighborhoods with eclectic eateries and upgraded cultural institutions are all reasons to stray beyond the sand. Here’s how to get the best of both worlds on a trip to San Diego.

Blending into a coastal bluff, the sustainably minded Alila Marea Beach Resort Encinitas (from $599 per night), which opened in the North County community in March, draws on the San Diego coastline’s beauty. Natural materials like stone and driftwood have been integrated into the design, and the hotel has direct access to Ponto Beach. The resort’s 130 rooms and suites feature linens crafted from sustainable beechwood fibers and boast views of Batiquitos Lagoon and the Pacific Ocean. Many have balconies or patios with fire pits. Alila Marea also has a permanent collection of artwork by famed surf photographer Aaron Chang and a coastal-inspired spa.

Closer to downtown, Monsaraz, Tapestry Collection by Hilton (from $180 a night), is opening in Point Loma in May. Just steps from the harbor, it celebrates the area’s Portuguese heritage; Monsaraz is the name of a medieval hilltop village in Portugal. The lobby sports traditional Portuguese-style blue tiling and maritime references throughout, like rugs inspired by waves and fish basket light fixtures. Playful touches include vintage travel posters in guest rooms and a large geometric mural by San Diego artist Janie Rochfort in the courtyard.

Downtown’s The Guild Hotel, a Tribute Portfolio Hotel (from $149 per night), opened in 2019 in a 1920s YMCA and won an Orchid Award for Historic Preservation the following year. The intricate facade with terracotta and iron detailing was painstakingly restored during the renovation. The lobby, designed by sought-after L.A.-based designer Sormeh Rienne, feels both timeless and modern with a hand-torched herringbone floor, fluted burgundy reception desk and luminous bar with quartzite counters. Make believe you’re in Paris while sipping a glass of rosé champagne in the Grace Garden, a courtyard restaurant with black and white umbrellas and olive trees.

While located in the Gaslamp Quarter, which has become San Diego’s rather touristy nightlife hub, the Pendry San Diego (from $285 per night) keeps things on the up and up. The hotel’s cinematic common spaces include a lobby with a wooden wall with built-in booths and the Provisional Kitchen, Cafe & Mercantile, where a mirrored chandelier dangles from the soaring ceiling. Guests can also enjoy a spa and rooftop pool, multiple drinking and dining venues, including the sustainable seafood restaurant Lionfish, and a contemporary art show at the hotel’s art gallery.

San Diego’s very own grand dame, the Hotel del Coronado (from $339 a night), is in the midst of a multimillion-dollar renovation and expansion to make the property relevant for another 100-plus years. The Cabanas “neighborhood” debuted last summer with 97 SoCal-inspired guest rooms featuring nautical decor and sunburst mirrors. Another new enclave, known as The Views, will open this summer. Named for the hotel’s founders, Babcock & Story Bar has been restored to its former glory with the refurbishment of the original 50-foot mahogany bar and the original cupola.

Balboa Park’s new living room, the Mingei International Museum, will reopen this summer following a three-year-long closure and renovation designed by San Diego’s LUCE et studio. Located in a 1915 Spanish Colonial building, the museum is devoted to folk art, handcrafts and design; the permanent collection consists of objects from 140 different countries. The new look includes terraces with leafy park views and site-specific installations, like a hand-dyed wool tapestry by Netherlands-based artist Claudy Jongstra. The first floor, which will include a cafe and rotating exhibitions, will always have free admission to the public.

Also in Balboa Park, San Diego’s world-famous comic book convention, Comic-Con, is getting a permanent home for exhibits, panels, art shows, installations and more this summer. The Comic-Con Museum is opening in an 85-year-old building, and the facade will become a canvas displaying colorful banners during the day and dazzling illumination at night. The mezzanine level will be home to three art galleries showcasing prolific artists’ work and the colorful, graphic world of comics and pop culture.

The long-awaited Museum of Contemporary Art San Diego La Jolla is slated to reopen later this year. Selldorf Architect’s reimagining of the seaside museum will double the size to more adequately display the extensive collection of Latin American and minimalist art.

Where to Eat and Drink

World-renowned chefs have become a fixture in San Diego, and the dining offerings have never been more tasty and diverse. James Beard Award semifinalist Claudette Zepeda’s VAGA Restaurant & Bar at the Alila Marea will draw on Zepeda’s upbringing on both sides of the border and introduce guests to San Diego’s rich cultures and cuisine.

Ember & Rye, the new dining venue at Park Hyatt Aviara, is another palate-pleasing concept from acclaimed chef, restaurateur and television personality Richard Blais. The restaurant is a modern country club cum steakhouse serving fresh seafood and aged steaks and offering coastal views. San Diego native Tony Guan (UnderBelly, Restaurant Gary Danko) is taking inspiration from his Chinese-American heritage at Fortunate Son, which opened in 2020 in Normal Heights. The menu pays homage to American Chinese takeout classics like beef and shishito peppers instead of the traditional beef and broccoli and sweet and sour pork belly. There’s plenty of patio seating, but don’t miss a chance to peek into the lavish interior decorated with lanterns, plants and carved dragons.

Cesarina in Point Loma is only two years old, but it feels deeply rooted in the community. Owner Cesarina Mezzoni, who lived in Rome, got her start in San Diego at a farmers market stand selling handmade pasta and from-scratch sauces. The eatery has a lush patio and an open-air pasta factory where guests can watch chefs making plump gnocchi and thin strips of bucatini. Cesarina excels at sweets like tiramisu with homemade ladyfingers and vegan cannoli with pistachio and candied orange zest.

Farther north in Carlsbad, French cuisine is getting the fresh San Diego spin at Jeune et Jolie. Chef Eric Bost worked his way through some of the best restaurant kitchens in Paris, including Alain Ducasse au Plaza Athénée and Les Ambassadeurs at the Hôtel de Crillon, before landing in Southern California. The restaurant is currently offering an outdoor dining experience. Make a reservation for a tasting menu that might include scallops with brussels sprouts and smoked eel or aged duck with tangy rhubarb while sitting beneath SoCal’s twinkling night sky.