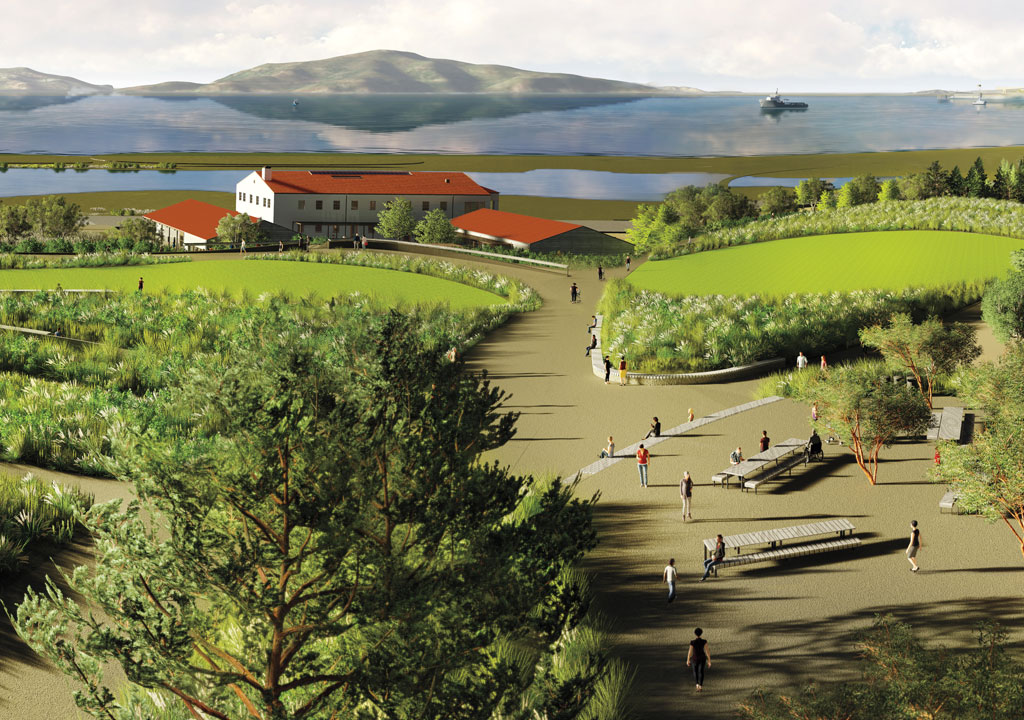 Back in 1993, work began to replace the seismically unsafe Doyle Drive, and the progressive idea to construct two tunnels with parkland on top was born. Countless hours of community input, collaboration between the Presidio Trust and the National Park Service, and fundraising (to the tune of $98 million) by the Golden Gate National Parks Conservancy have resulted in Presidio Tunnel Tops, a park that will change the face of San Francisco.

A design search that included 100 agencies landed on James Corner Field Operations, the global landscape architecture and design firm celebrated for its work on NYC’s High Line. Both the High Line and the Presidio Tunnel Tops allow visitors to see the city in an entirely new way.

“Everyone will visit the park expecting the view to be fantastic because we all know that the bay offers some of the most beautiful scenery in the world, but I believe people will be even more awed by how impressive the view is because the Tunnel Tops allow you to be at a higher elevation than has previously been able to be experienced,” says Richard Kennedy, senior principal at Field Operations. “You’re up high, hovering above the marsh of Crissy Field, and if you spin in a circle, you can see almost every landmark in the city.”

The park was designed to fit into the context of the landscape — from the shape of its topography to the plantings and furnishing materials. Field Operations worked with the Presidio Trust to reclaim wood from its forest management program. “All the wood you see used in the furnishings and play structures is from the Presidio forest,” explains Kennedy.

Community outreach has been at the core of the project, including getting input from 10,000 members of the public. “Studies have shown that the three groups that national parks were not servicing well were communities of color, low-income families and people with disabilities,” says Michael Boland, the Presidio’s chief park officer. “So, we’ve been very intentional about working with those communities to get their input and make sure that the experience we will deliver for the Tunnel Tops makes it worth traveling for.” There is something for everyone: picnic tables, wheelchair- and stroller-accessible pathways, green fields for playing and lounging, play structures, and tiered concrete and grass steps that look out onto perhaps the world’s best sunsets. There is even a fire pit — responsibly overseen by forest rangers for special events.

“Our goal is to build generations of young people that have a relationship with the outdoors and will be the next generation of rangers,