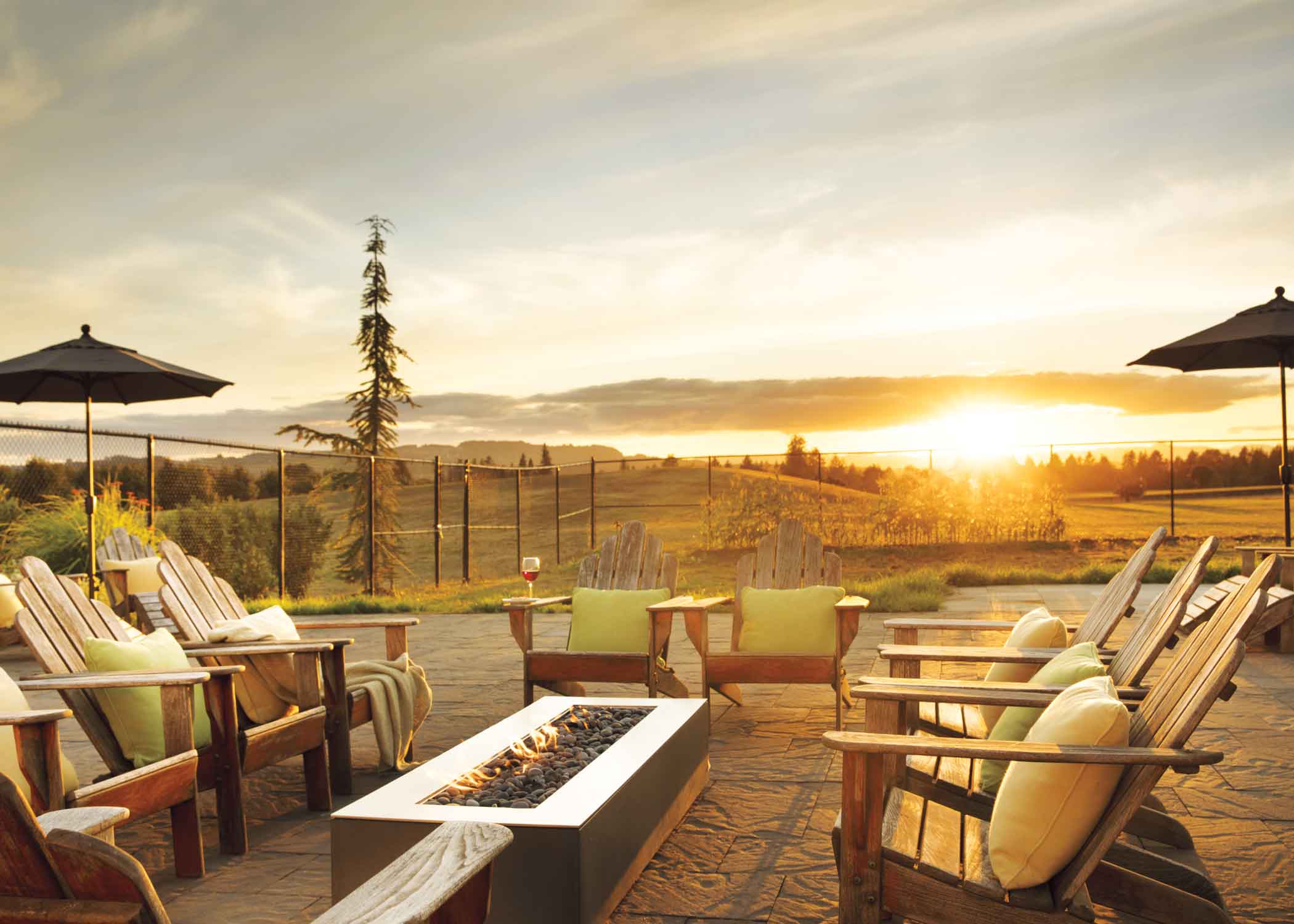 Here in the Bay Area, we have plenty of fantastic wine at our fingertips, but Oregon’s lauded Willamette Valley wine region, about a 10-hour drive north and a relatively quick plane ride from SFO (travelers fly into PDX and drive about an hour to the Wine Country), is worth the pilgrimage. Made up of nine appellations and stretching from Portland to Eugene, the rustic green valley — moss-covered trees and slightly listing metal barns with rusted red roofs dot the countryside — has been producing excellent pinot noir since the late 1970s. A Willamette Valley pinot won the Gault-Millau French Wine Olympiades (much to the alarm of the French) in 1979. The American Viticultural Area has grown by leaps and bounds since then. There were just 70 wineries in 1990; now, there are nearly 700, but the production remains a fraction of what California produces. Oregon produces 1 percent of the domestic market while California makes a whopping 81 percent of all U.S. wine. But in the Willamette Valley, visitors will be able to try wines and have experiences they might not otherwise.

The Setting Inn Napa Valley is opening a sister hotel in the Willamette Valley, The Setting Inn Willamette Valley (from $220 a night), in mid-May. Set on a hillside overlooking the Chehalem Mountains’ patchwork of vineyards and farms, the upscale bed-and-breakfast will have just eight guest rooms —  if you can, book the light-filled corner room with a four-poster bed and a Juliet balcony. Breakfast, delivered directly to guest rooms in wooden boxes each morning, consists of locally made pastries and award-winning fromage blanc from Briar Rose Creamery in Dundee. The same degree of thought has been put into common spaces, e.g. a living room with a 29-foot vaulted ceiling and a white board-and-batten adorned fireplace or a bocce ball court with valley views. The owners of The Setting Wines, a project involving Aperture winemaker Jesse Katz, plan to open a winery on the property in the future.

The Allison Inn & Spa (from $445 a night) has set the bar high for luxury accommodations in Oregon for more than a decade, and it’s continuing to evolve with the times. The hotel’s 15,000-square-foot vinotherapy spa features treatment rooms that look out onto private gardens where deer are known to nibble. A new Himalayan Salt Therapy room, which bathes guests in warm, amber-colored light, helps counterbalance the effects of electronic devices and boosts the immune system, all while being touch-free. This summer, therapists will give outdoor massages in a temporary structure in the Meadow Garden. One of the pleasures of a stay at The Allison is strolling the vast grounds. A mile-long path winds its way past vineyards and a sculpture garden featuring everything from repurposed antiquities to abstract art.

The 36-room Atticus Hotel (from $285 a night) opened in McMinnville, a town in the heart of Oregon Wine Country with a lively main thoroughfare lined with 100-year-old buildings, in 2018. The hotel looks like it was built at the turn of the century — the grand lobby and guest rooms have high ceilings, jewel-toned furnishings and local art — but it’s new construction. The same person owns the hotel’s farm-driven Red Hills Kitchen as well as the excellent Red Hills Market in Dundee.

May is Oregon Wine Month and wineries have special events like cooking classes and wine and cheese pairings, but there’s plenty to do year-round. For a more adventurous Wine Country experience, Equestrian Wine Tours (from $190 a person) offers two-and-a-half-hour rides on Tennessee walking horses through Dundee’s russet hillsides. Tours typically stop at Winter’s Hill and Durant vineyards, also home to the Durant Olive Mill. Many of the horses are rescues, and custom saddlebags make purchasing and transporting bottles a breeze.

Wine de Roads’ (from $150 per rider) cycling tours through the Chehalem Valley last six hours and include three winery visits and a picnic lunch. The terrain is mainly flat roads with some rolling hills. On frequent stops, guides impart wisdom about the region’s history and, of course, the wines. Tours begin in late April and are offered through October.

Portland Rose Balloons (from $199 per person) sunrise flights glide over the Willamette River, forests, tulip fields and golden vineyards and take off from different locations in the valley depending on the season.

Families should check out the 8,000-square-foot Stoller Experience Center at Stoller Family Estate, which has augmented reality, art, interactive tasting tables and videos projected on a jumbotron as well as wide lawns; the Smithsonian-affiliated Evergreen Aviation & Space Museum in McMinnville, the location of Howard Hughes’ original Spruce Goose; or go for a hike in Champoeg State Park.

French winemaking royalty, the Drouhin’s, founded a winery in Beaune, France in 1880. They purchased land in the Willamette Valley in the 1980s and the rest is history. Led by winemaker Véronique Drouhin, Domaine Drouhin’s bright and elegant pinots and chardonnays stand up to their Burgundian counterparts. Domaine Drouhin is offering seated outdoor tastings by appointment on their outdoor terrace overlooking the 235-acre estate.

Seek out the Carlton Winemakers Studio in Carlton to experience a rising star. The owners of 00 Wines or “Double Zero,” Chris Hermann, an environmental lawyer, and his wife Kathryn are creating what might be considered Oregon’s “grand crus.” The Hermanns’ minimal intervention pinots and savory “black chardonnays,” made using an 80-year-old Burgundian technique where a winemaker extracts maximum tannins from grape skins are complex and addictive. The silky Kathryn Hermann Cuvée is made exclusively with a California chardonnay clone planted decades ago and largely ripped up in the region. The Hermann’s are also making small quantities of wine in Burgundy and Champagne. 00 Wines doesn’t have a fancy tasting room, but you can taste and buy the wine at the Winemakers Studio. In addition to being a winemaking facility it is great place to learn about up-and-coming winemakers and has a light-filled tasting room and patio.

Burgundy fans will want to travel 30 miles south to Lingua Franca in the Eola-Amity Hills AVA, where a dream team is creating wholly original wines that express the region’s terroir like the deep, delicate 2018 The Plow Pinot Noir. French winemaker Thomas Savre worked at Domaine de la Romanée-Conti in Burgundy, while co-founder Larry Stone was the first American to win the Best International Sommelier in French Wines competition in Paris. Consulting winemaker Dominique Lafon is the namesake, director and winemaker of one of the great estates in Meursault. Lingua Franca’s seated tastings by appointment offer in-depth intel on winemaking and the valley.

Soter Vineyards, owned by the founder of Etude Wines, doesn’t have a French tie, but the hilltop tasting room does pay homage to the valley’s agricultural roots. The 240-acre property is a certified biodynamic farm, and the architecture — lofty reclaimed wood ceilings, an oversized fireplace and sliding doors — recalls a modern farmhouse. Soter offers tastings for small groups on different parts of the property, making it great for keeping distance. Ingredients from the farm are used in the MSR Provisions tasting menu, where head chef Sara Hauman, who worked in San Francisco at Bar Agricole and Octavia, pairs seasonal bites (think smoked oyster with toasted hazelnut and brown butter and purple broccoli tempura with garlic and chickpea-miso dip) with Soter wines.