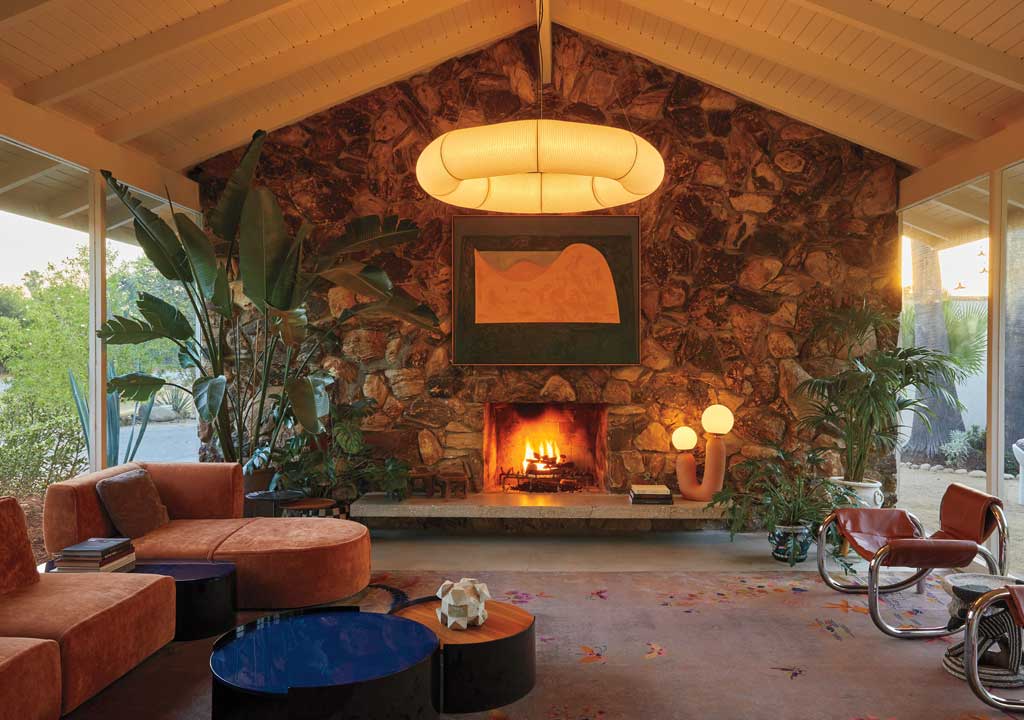 Ojai has been a hideaway for wellness seekers looking for spiritual growth and rejuvenation since mystic and philosopher Jiddu Krishnamurti had an epiphany in the valley in 1922. The native Chumash people, who gave Ojai its name, meaning “the Nest,” knew of its magic long before. Ojai’s first inhabitants reportedly chose the valley for its unique east-west orientation resulting in the rare “pink moment” that bathes the west-facing bluffs in pink light and believed it was a place of healing. The small town, located 80 miles northwest of Los Angeles, is also a veritable fruit basket where citrus and other fruits, like olives and avocados, grow in abundance.

“I’ve had certain fruits in Ojai I had never eaten, like a ripe sapote. It tastes like apple custard. It’s soft and so good,” says Zoe Nathan. Along with husband Josh Loeb, Nathan still operates her Rustic Canyon restaurant empire in L.A. while raising their three children on a three-and-a-half-acre farm, called 50/50 Farms, they purchased in Ojai in 2020. Half of the food grown goes to charity, while the other half helps sustain the family and their restaurants, including The Dutchess, which opened in downtown Ojai in January.

“We’ve also met people who have been farming for a long time, and they do it so thoughtfully and so beautifully,” adds Nathan.

Nathan and Loeb aren’t the only ones. In addition to farm stands and health food cafes, visitors will find a diverse array of sophisticated restaurants, some headed by chefs and restaurateurs who have moved to Ojai from L.A. and elsewhere, from a Japanese izakaya to a pop-up for Michelin-starred chefs. Here’s where to eat, sip and stay during a delicious Ojai getaway.

The five-star Ojai Valley Inn opened The Farmhouse, a culinary center and pop-up dining venue, in 2019. Designed by Backen & Backen in Napa, the modernist barn feels like a mini Meadowood and sits beside an organic chef’s garden, a two-story outdoor fireplace and a 100-year-old oak tree. Michelin and James Beard–awarded chefs such as Nancy Silverton and Dominique Crenn cook meals throughout the year, including a coursed-out homage to Baja or an Italian truffle feast. The 2022 lineup includes Harbor House Inn chef Matthew Kammerer March 7 and chef Thomas Graham of Le Mermoz in Paris. He’ll be offering a multicourse meal with wine pairings (his first-ever dinner in the U.S.) July 29. Dinners sell out in advance, so book ahead.

Nathan and Loeb’s The Dutchess, on Ojai’s arcade-lined Ojai Avenue, involves a cadre of talent including local baker Kate Pepper (Pepper has a cult following for her naturally fermented and heritage grain bread), pastry chef Kelsey Brito and chef Saw Naing, who grew up in Myanmar. The space, one of Ojai’s original bakeries, is a bakery/cafe by day and a buzzy Burmese bar and restaurant by night. “There’s only one other Burmese restaurant people go to, and it’s in S.F. To say that there’s love in this food is ridiculous,” says Nathan. Dishes include lamb biryani, which Naing’s grandmother used to make, featuring local ground lamb, Koda Farms rice, puff pastry, raisins and cashews, and vegan coconut crème brûlée with 50/50 farms lemongrass and lemon verbena, toasted coconut and See Canyon quince.

“Many restaurants claim to be farm to table, but it’s just hype. We buy things from local farms, butchers and fishermen and support the community, who can then buy from the restaurant. Everything comes in a circle,” says Nathan.

Another exciting opening, Rory’s Place, debuted in February and reflects a similar ethos. Meave McAuliffe, former head chef of Saltwater in Inverness and executive pastry chef of Gjelina in Venice and her sister, Rory, collaborated on the project and chose Ojai for its bevy of sustainable ingredients and small-town feel. “It’s full of food and a food mecca without a ton of restaurants,” says Rory.

Rory’s Place has a bustling bar where servers pour natural wines and slice charcuterie using a shiny red meat slicer. Dishes, mostly cooked over live fire, showcase the freshest local produce and seafood in combinations like tilefish with passion fruit and Channel Islands halibut with citrus beurre blanc and local sunchoke puree. The space beside the old theater is one of the oldest in Ojai and has 100-year-old wood floors and an aluminum ceiling.

Downtown Ojai also has an excellent Japanese izakaya. Izakaya Full Moon opened in 2020 and serves exceedingly fresh fish — amberjack sashimi with sesame sauce and creamy uni from Santa Barbara — as well as beef tataki and fried chicken karaage. The sparse walk-ins-only restaurant has seats at the sushi bar or at a picnic table on the patio.

Locals and visitors scramble for tables at Nocciola for its reasonably priced tasting menu ($75 for four courses) and handmade pastas like pappardelle with roasted wild boar and tagliolini with chanterelles, leeks and Piave fondue.

For a taste of classic Ojai, there’s the romantic Ranch House, which opened in 1956 and has long been a celebrity haunt. Today the restaurant is owned by Italian artist Maria Angela Edelson and hotelier Steve Edelson. It stays true to the original owners’ vision with many plant-based dishes, herbs grown on-site and a deep wine list featuring organic and biodynamic wines.

The owners of Farmer and the Cook, one of Ojai’s long-standing health food cafes, fell in love “while buying kabocha squash” at the Ojai farmers market and have been involved in organic farming and cuisine in California for decades. While it has a nutritious bent, the menu isn’t too healthy. There’s crunchy sourdough loaves, swiss chard and cheese enchiladas along with bright smoothies and tonics like the Farm Fennel with fresh pressed apple, fennel and lime juice. It’s also a great choice for mingling with locals enjoying Thursday pizza nights and live music every Sunday.

No visit to Ojai is complete without stopping by the Ojai Certified Farmers Market on Sunday; it showcases the cornucopia of ingredients grown in and around the valley, like sweet and juicy Ojai pixie tangerines that start ripening each March, buttery avocados and peppery olive oil.

The lean, minimal-intervention wines at Ojai Vineyard, still independently owned after four decades, have a European sensibility, but the fruit is sourced from all the best regional vineyards. Ojai Vineyard’s winemaker experiments with different grapes and vineyard plots. The tasting room in Ojai’s old firehouse has dozens of wines to try, from dark and earthy Fe Ciega pinot noir to a bracingly crisp blush rosé.

Wine lovers should also visit the indoor/outdoor decor and picnic shop, Tipple & Ramble, for happy hour, when revelers enjoy copious amounts of sparkling rosé and empanadas in the garden. In warmer months, orders are taken out of a 1950s trailer.

Following a hike in the Topatopa Mountains, plop down at the Ojai Valley Brewery on Bryant Street, where brewers use pure Ojai water and indigenous herbs and fruits in one-of-a-kind creations like the Pixie, a white wheat ale brewed with Ojai citrus and dried flowers.

The Spanish Colonial Ojai Valley Inn (from $500 per night) was built in 1923 and added to over the years. The bright white buildings including a 31,000-square-foot spa and 306 large rooms and suites, most with fireplaces, meander down a hillside. Guest rooms have terraces and views of the mountains and a manicured golf course.

Located on a 600-acre parcel, where trees and shrubs are dripping with fruit including pomegranates and cherimoyas, the Thacher House (from $750 a night with a two-night minimum) offers a slice of bucolic Ojai life. Owner Cal Zara fell in love with Ojai more than 10 years ago. “Everyone knows each other. You can still, to this day, go to a farm stand, and it’s an honor system. You can take the food and put the money in the box,” he says. Zara learned carpentry in Greece when he was 16 and renovated the property’s dilapidated buildings into chic accommodations like a loft and a three-bedroom cottage with rustic wood finishes and antique furnishings.

Boutique hotel options in Ojai include a pair of hotels owned and operated by Shelter Social Club. The cabin-like Ojai Rancho Inn (from $250 per night), a five-minute bike ride from town, has knotty-pine-paneled walls and a cozy bar where bartenders spin vinyl. The newer Capri Hotel (from $300 per night), once a 1963 roadside retreat, was renovated from top to bottom in 2020. Guest rooms mix mid century and minimalism with half-moon headboards, artsy chairs and geometric rugs.

Larger groups might consider the Casa Barranca Estate (from $2,500 a night with a three-night minimum), which sleeps 10. A national historic landmark, the bungalow was built in 1909, and the sprawling property has a pool, hot tub and yoga studio.