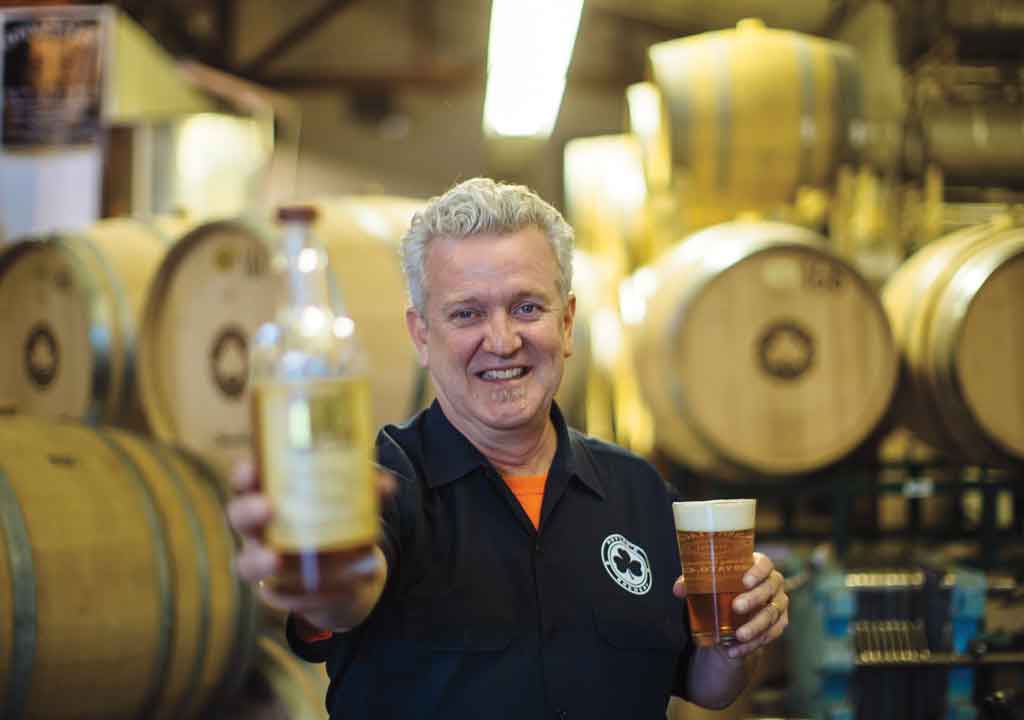 Even folks who don’t live in Marin have likely enjoyed a can or bottle of Mt. Tam Pale Ale, San Quentin’s Breakout Stout or a Pt. Reyes Porter from Marin Brewing Company. The venerable brewery that opened its doors in Larkspur Landing in what is now Marin Country Mart on April Fools Day in 1989 served its last brew about three months ago.

When accountant/serious home brewer Brendan Moylan and his late partner Craig Tasley opened their brewpub, only 25 existed in the entire state of California. Today there are more than 1,000. MBC took home four medals from the Great American Beer Festival a mere six months after opening its doors. The brewpub became an immediate favorite — and was especially revered by hikers and mountain bikers throughout the county, who would regularly congregate post-hike or -ride for the hearty and satisfying beer.

Today, Moylan will likely be found behind the bar at his eponymously named second brewery and restaurant (which he opened in 1995) in Novato. Moylan cites multiple factors for closing the longtime favorite Larkspur spot. “It was a large space — a lot of square footage, but mostly it was due to Covid,” he says ruefully. And while he wasn’t able to keep most of his employees, longtime brewer Arne Johnson transitioned to the Novato locale and continues to make consistently tasty beer for Moylan’s Brewing Company. In fact, several of the Marin Brewing Company favorites will still be produced at the Novato brewery.

Even with the closing of the Larkspur brewpub, Moylan shows little sign of slowing down. Now the Bel Marin Keys resident of 34 years spends most of his time at his Novato brewery, but also makes time for another venture he began in 2004.

“When I had my first taste of Lagavulin Scotch — I literally chewed it — I couldn’t believe how rich and flavorful it was. I wanted to make my own,” explains Moylan, who teamed up with Stillwater Distillers in Petaluma and began producing aged single malt whiskeys under the Moylan’s Distilling Company brand. When asked what he enjoyed most about making spirits, his answer was immediate and unequivocal.

“Comparing and contrasting whiskeys — the bench trial — consume, taste and evaluate.” He goes on to say there is a lot of chemistry involved, and flavor is also imparted by the type of wood barrels — he is fond of using barrels that previously housed chardonnay wine, port and sherry. He also insists on using a 500-gallon Vendome Still from Kentucky, where he believes the very best still-builders reside. And he must be doing something right, as just last month the distillery repeated as U.S. Open Whiskey’s Grand National Champion. Along with locally made whiskeys, Moylan creates small batches of liqueurs and grappa that are all available at various Bay Area restaurants and retailers.

Now local residents have two good reasons to head north, where they can still enjoy their favorite Marin Brewing Company beer and discover Moylan’s spirits (not sold at the brewery). Given that Moylan was way ahead of the curve, it makes sense that people trust this trailblazer’s instincts and don’t want to miss whatever he sets his sights on next.