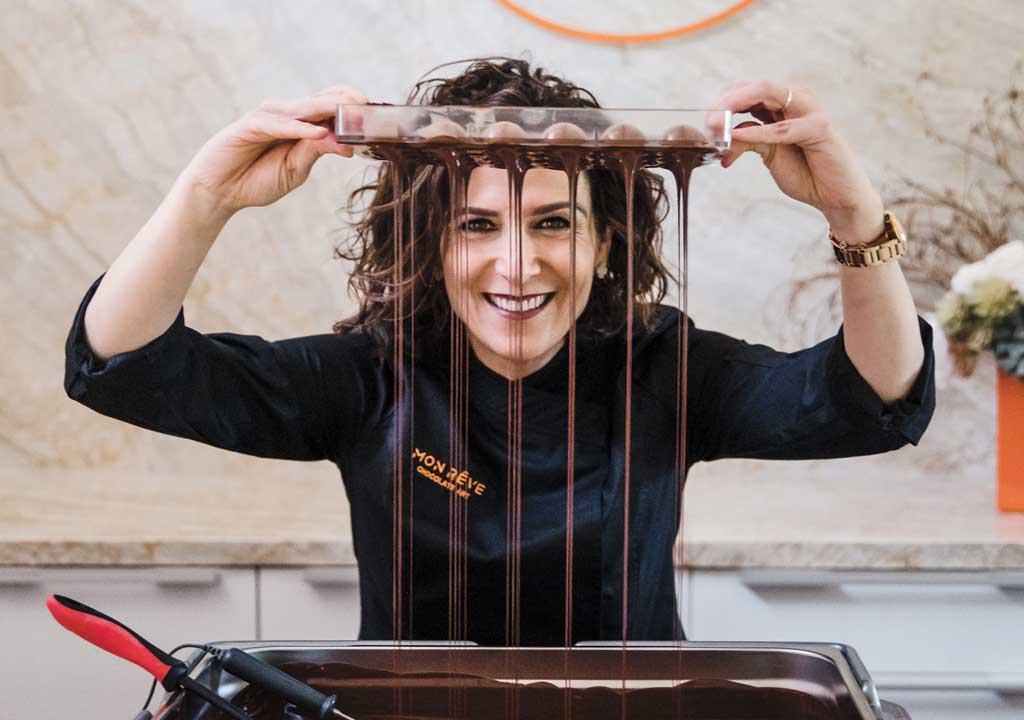 One glance at Pooneh Yamini’s artistic desserts and you won’t believe she hasn’t been baking her whole life. She might as well have been, with a lifelong love and eye for food that inspired her training at everywhere from the renowned Le Cordon Bleu in London to the award-winning Arsicault Bakery in San Francisco.

The founder of Mon Rêve Chocolate Art Studio in Mill Valley did not embark on her culinary journey until age 46 — after getting married, having two kids and leaving her job in pharmaceutical sales.

“I would always look out for the best desserts,” Yamini says. “I was just not comfortable to try it myself until later on in life.” Following a move with her family from the Bay Area to Dubai, homesickness impelled Yamini to look outside of her comfort zone. She found herself thinking What makes me happy? and turned to cooking as a hobby. At first, she would just participate in pastry workshops when visiting Europe: eclair classes in London during one trip, then in Paris the next. However, the bits and pieces of recipes taught in each class eventually became unsatisfactory. Yamini had fallen in love with French patisserie.

“It’s just incredible how everything lined up. Who would have thought I could just leave my kids and fly off to Paris and go to pastry school?” Yamini says, referring to the five-month professional program at L’École Ferrandi that she pursued next. “It just so happened I found an apartment at the same time. My mom was available to help. My husband was available. Everything worked out so beautifully … I was fearful, but something made me feel like I really need to go, and I really need to do this.”

Now, from her own studio in the Mill Valley Lumber Yard, Yamini radiates passion, sharing recipes she picked up from her own teachers. Translated from French, the name “Mon Rêve” means “My Dream.” “I love teaching so much, and I felt like we’re really missing it in the states,” says Yamini. “The reason I’m here today and built the studio is that this is not a commercial kitchen. It’s really meant for teaching. I try to simplify the recipes such that anyone can make it at home.”

Her enthusiasm for teaching French patisserie and chocolate confectionery is so powerful, indeed, that it can be felt across the room — and computer screen — because when Pooneh Yamini says Mon Rêve is for “anyone,” she means anyone. Since opening in February 2020, Yamini has offered in-person and online classes for groups of 8 to 12 people, children age 8-plus, beginners, aspiring chefs, corporate teams and others. Coming up in April and May are two virtual master classes on creating Caramelized Apple Cream Puffs and a Dark Chocolate/Salted Caramel Tart, a great treat for home bakers to add to their recipe collections.

But while Yamini enjoys and will continue to teach workshops via Zoom, she values being in-person most. After visiting the studio for the first time, she fell in love: “I wanted to have a beautiful space. When people walk in, they feel good. It’s an inviting environment.”

The studio is settled among tall trees, lined by large windows and washed in soft gray and orange hues — like something out of a storybook. With top-of-the-line materials on hand, the luxury and warmth of the spacious studio are conducive to creativity. Above all, Yamini wants her students to feel comfortable asking questions — and revel in the fact that it is never too late to learn something new.