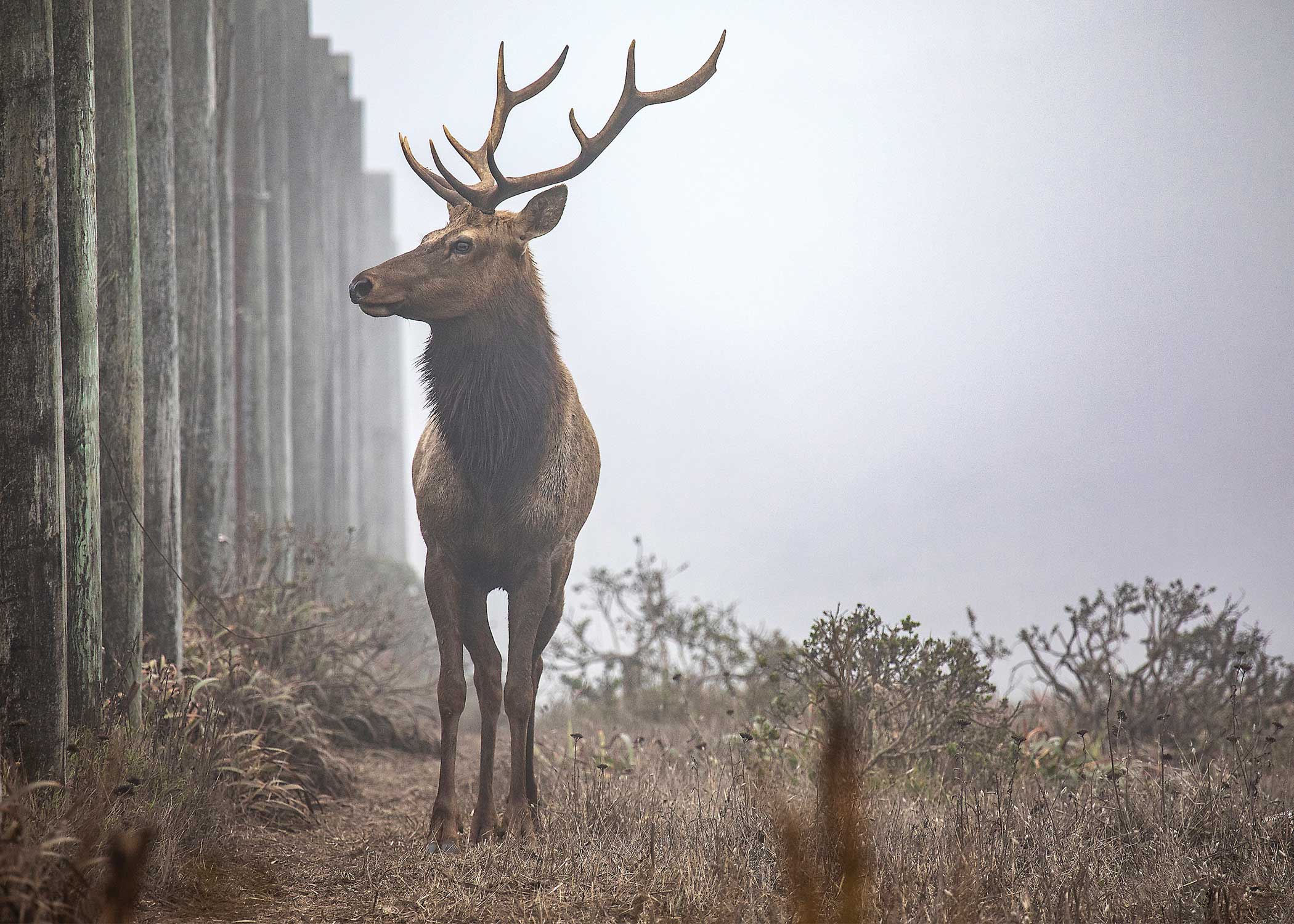 All Elk photos by Jack Gescheidt, www.treespiritproject.com
by Bob Cooper

Jack is busy. During a September rally at the Bear Valley Visitor Center he organized to draw attention to the plight of the Point Reyes National Seashore’s tule elk, he scurries around to answer journalists’ questions and takes wide-angle shots from atop a stepladder over the crowd of about 200. He is in his element.

Jack Gescheidt, 61, was a snarky, meat-eating Manhattan copywriter for Ford trucks and then a national magazine photographer before his slow transformation to vegan environmental activist. Ironically, the skills he honed working for corporate clients on Madison Avenue now serve him well as an “elktivist” organizer and photographer for environmental causes.

“Living in Marin for 13 years has peeled back some of the New York protective layers,” says Gescheidt. “But I’ve always felt more alive in the woods, and that realization led me to taking photos of humans and trees in communion in nature.” That would be the TreeSpirit Project, which involved nude volunteers posing for him in and around some of California’s most photogenic trees for artistic images that have been showcased at the Sausalito Art Festival. His quasi-legal “shoot” of nudes in threatened trees on the UC Berkeley campus — his first venture into activism — drew the most attention.

The day after the September 12 rally, the U.S. Interior Department approved a 20-year extension of the park’s 24 cattle ranchers’ leases, newly allowing them to raise goats and sheep and grow crops, and approved the culling (shooting) of the Drakes Beach elk herd when it exceeds 140 (it’s now at 139). These are the elk, among 600 in the park, that ranchers say are competing for forage and water with their 5,600 cows. Ranchers are OK with the 300 elk at Tomales Point because they’re fenced in, away from the ranches, but this group is dying of hunger and thirst in large numbers.

Gescheidt is lead plaintiff in a suit filed in June by the Harvard Law School’s Animal Law and Policy Clinic that demands that the park plan for the humane management of its wildlife. Conservation groups are expected to file additional lawsuits on environmental grounds.

“The NPS has called the 406 elk that died during the two droughts since 2012 ‘natural’ population declines,” says Gescheidt. “But there’s nothing natural about the three-mile fence that prevents them from roaming to find additional food and water as ‘wild’ animals are supposed to do in a national park. We have been begging and badgering and screaming for something to be done.”

Gescheidt organized four mass water deliveries to the fenced-in elk at Tomales Point before park officials delivered troughs — while still insisting that the problem is a lack of forage, not water. He has also orchestrated six protests, including the September rally where, like many in the age-diverse crowd, he wore a “Free the Elk” T-shirt.

The activists’ chief complaints are that ranchers’ cows are given priority over the elk, resulting in dead elk, and that cattle ranches contribute to climate change and don’t belong in a national park. The protesters are not alone, as 91 percent of 7,627 public comments the park has received have been pro-elk. The ranchers, park administrators and some politicians, including Rep. Jared Huffman, argue that the ranches are part of the park’s cultural history, dismissing concerns about soil degradation, groundwater contamination, biodiversity decline, greenhouse gas emissions and impact on the elk.

“Elk will keep dying until the fences come down and private cattle operations are removed, which are in direct conflict with healthy ecosystems,” says Gescheidt. “The NPS is starving, confining, and will now shoot to death wild elk in a national park. If we can’t win this one in a time of climate change, we’re all doomed.” 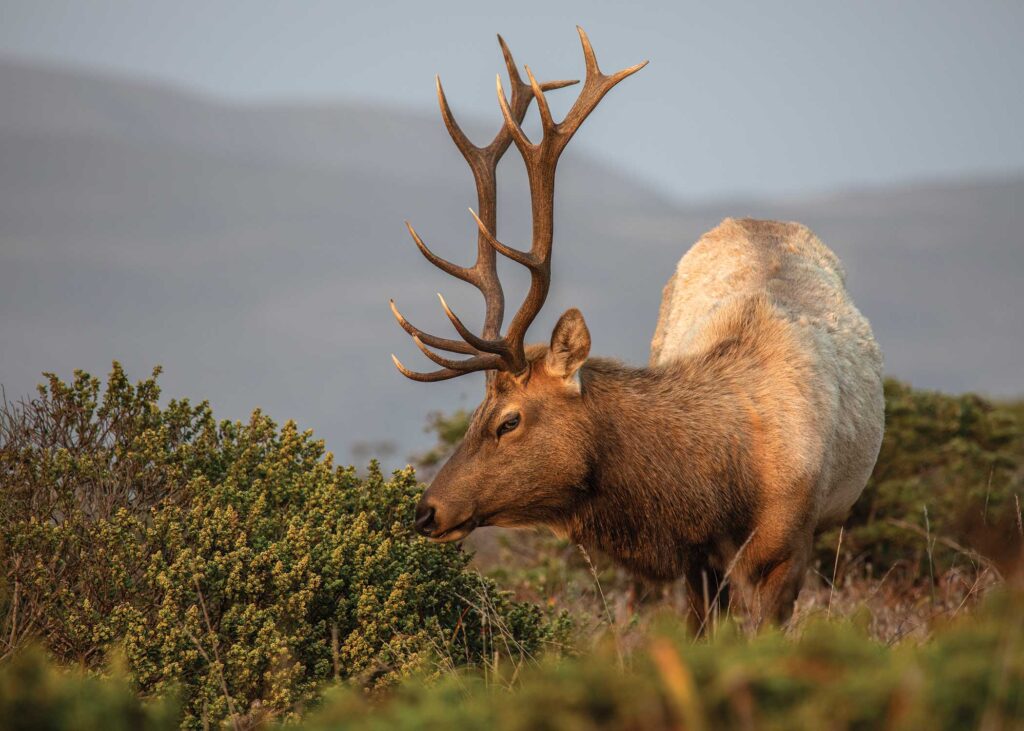 1962
Point Reyes National Seashore
is founded with cattle ranchers allowed to lease some of the land, an arrangement meant to be temporary.

June 2021
A suit with Gescheidt as lead plaintiff is filed against the NPS for allowing elk to die, ignoring its mission to protect wildlife.

Jack Gescheidt is founder of the TreeSpirit Project.  And lead Tule elk campaigner for In Defense of Animals. The photographs in this article are available as custom prints. Proceeds support Jack’s environmental advocacy. Contact him directly via email: jack@treespiritproject.com, or landline: 415.488.4200. www.treespiritproject.com 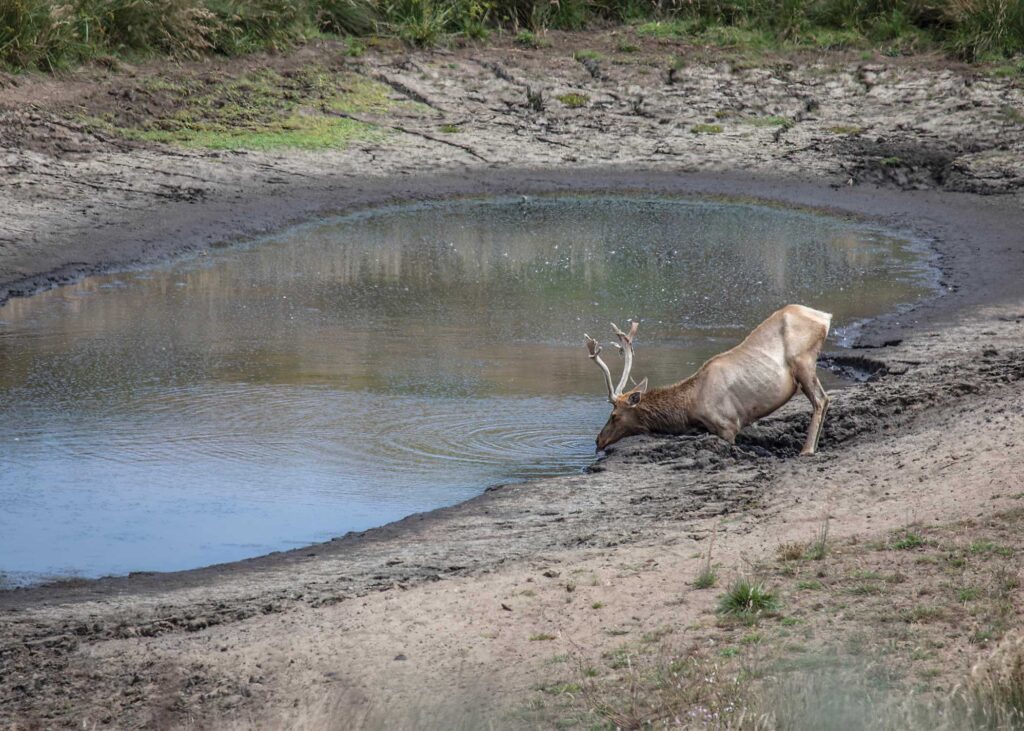