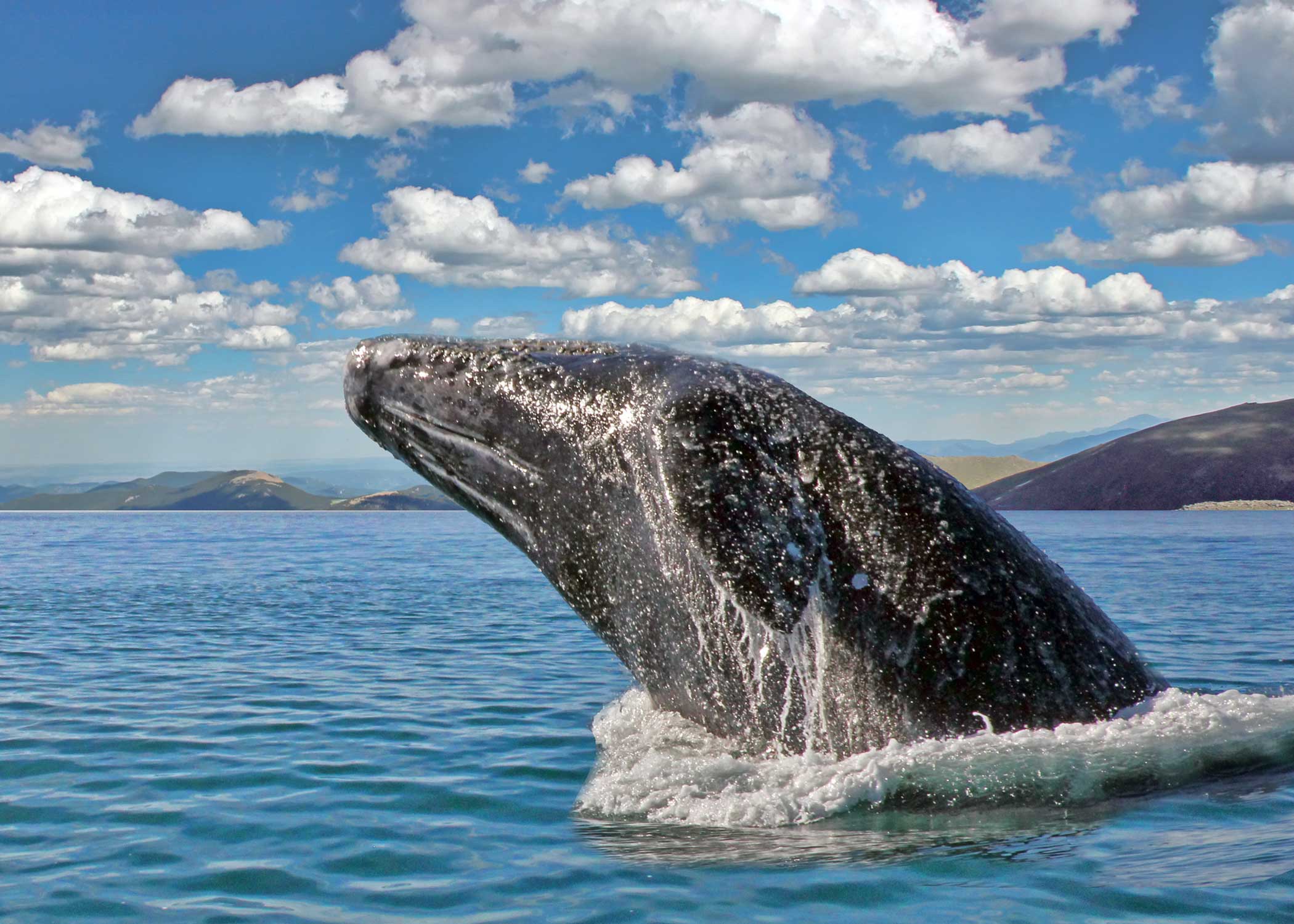 A Gray Whale Breaks the Surface (www.stock.adobe.com/JimGlab)
by Molly O'Brien

Marinites won’t be the only ones traveling south to warmer weather with their pod for a break this winter. December brings the start of the massive southern migration of around 20,000 California gray whales from the Arctic down along the Pacific coast (through Marin waters) and toward Mexico each year.

These gentle giants will swim 5,000 miles south during December and January to leave behind the freezing northern feeding grounds of the Alaskan seas for the comfort of the warmer, more shallow waters off Baja California to birth their calves. For those who want to catch a glimpse of the action, there are a few ways to have the ultimate whale watching experience.

“The Whale Trail” is a series of sites along the Pacific coast where people can see whales and other marine mammals from land. Whale watching in the Point Reyes headlands is a spectacular show. There’s a network of viewing spots along this trail, from Puget Sound to the coastal waters of the Pacific.

The Point Reyes Peninsula extends 10 miles into the Pacific Ocean, which allows land-based visitors one of the best opportunities to get closer to being in the middle of the action on this whale “highway.”

The headlands of the Point Reyes Peninsula offer one of the finest spots to view gray whales along the California coast. Here, the Gulf of the Farallones just offshore acts as a 20-mile-wide lane for the whales to cruise in.

Chimney Rock and the Point Reyes Lighthouse are crowd favorite spots for whale sightings. Mary Beth Shenton, a ranger for the National Park Service at the Point Reyes National Seashore, knows the best spots to view these mysterious, majestic creatures.

“One of the most reliable spots to see some whales is on the lighthouse observation deck,” says Shenton. “It’s the westernmost part of our park, as the whales are traveling north to south or south to north on their migrations.”

But you don’t just have to watch from land; whale watching boat tours are also a fantastic way to get up close on the water. San Francisco Whale Tours owner and head captain Joe Nazar knows how profoundly impactful a whale watching experience can be.

“Every trip is different,” says Nazar. “There’s a certain curiosity and passion about these animals — they evoke a lot of emotions. I think whales are some of the most unique, intelligent creatures and we still have lots to learn from them.”

Luckily, these gray whales aren’t in a rush — for them, it’s all about the journey. They travel on average just five miles per hour during migration and can stay submerged for up to 15 minutes at a time. So, keep an eye out for the water spout!

“It’s wonderful to watch them; I look forward to my next trip every day,” says Nazar. “I’m always trying to promote the educational side of getting out to see whales — they’re amazing animals.”