How One Marin Family Is Supporting Ukraine 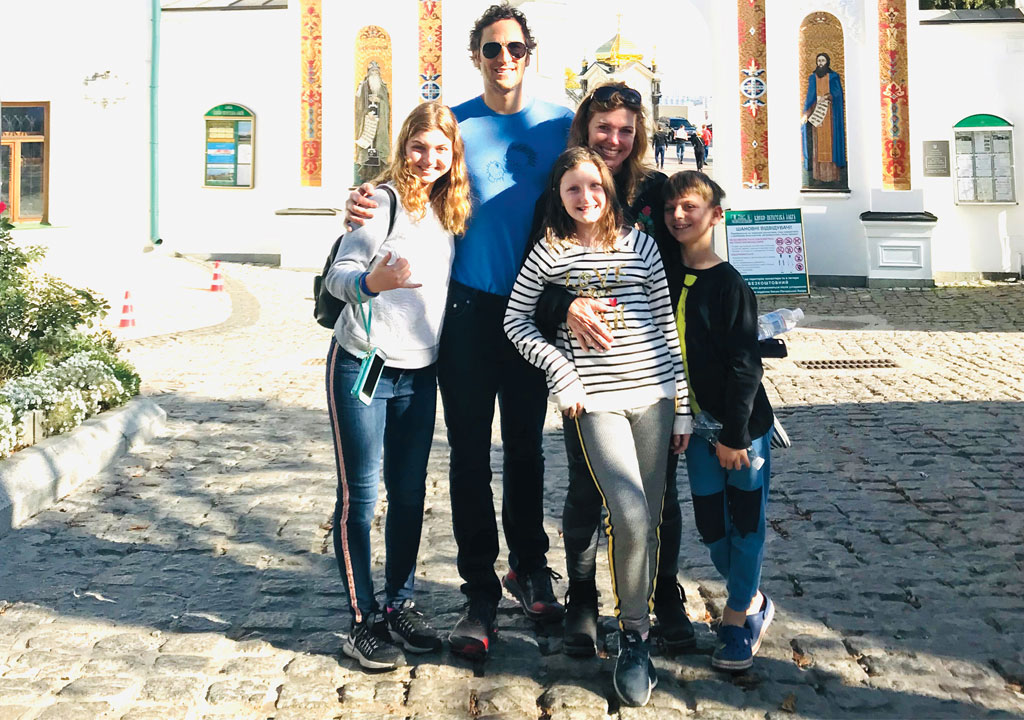 From left: Jamie, Andy, Kelly, Sara and Kai in Kyiv, Ukraine, October 2019 (Courtesy of the Kurtzigs)
by Daniel Jewett

For Andy and Sara Kurtzig, who have ties to Ukraine and lived there in 2019 with their three kids, the decision to skip spring break in Hawaii and instead bring all the supplies they could carry to the war-ravaged country started with the words of their 17-year-old daughter.

“Mom, I really think we should go to the border,” young Jamie said. Their 12-year-old son, Kai, agreed, and Sara and Andy also felt a need to make the trip. “Our colleagues and friends are there and we’re reading the news and worried about them every day,” says Andy, who runs a company called JustAnswer, which employs 262 people in Ukraine.

So the family bought eight large duffel bags and filled them to the absolute weight limit with medical supplies, armored vests, night-vision goggles, heavy-duty drones and maybe most important, the diabetes supplies that Jamie’s Ukrainian endocrinologist (Jamie has Type 1 diabetes) was pleading for. “There are so many problems that the average person doesn’t think about,” Sara says, adding that, for example, prescriptions don’t work for Ukrainians outside Ukraine. “We wanted to take some of this tremendous logistical burden off as many people as we could.”

So with an official letter from the Ukrainian military explaining why the Kurtzigs would be taking duffel bags full of military supplies through airport security and some “sweaty moments” at SFO, the family landed without incident at their first stop in Budapest to deliver insulin to one of Andy’s refugee employees. “I would say that within the first 30 seconds of coming to our hotel room so we could give him all these things he was in tears,” Sara says. “This strong man was just in tears.”

As Sara and the kids stayed behind to help refugees at the Slovakian border and Andy headed into Ukraine to bring supplies, all were impressed by the stoicism of Ukrainians.

“I didn’t see any of them sobbing or wailing, but they did look exhausted,” Sara says, adding that most of the refugees getting off the evacuation buses were women and children. “They’re on a mission. They’re with their kids and they’ve gotta keep it together. They’re in crisis mode, so they have to just get it done.”

“There were some tears shed about the atrocities that are happening to their friends, family members and countrymen, how terrible Russia is being,” Andy says about finally reaching his employees in Ukraine, the military note helping him get across the border with the supplies. “But you could just see in their eyes, their commitment to victory; throughout the day I just kept seeing them doing everything they can to win.”

Andy and Sara describe their kids as very compassionate and think this experience will stay with them for a long time, but one moment involving Kai and the blue and yellow Frisbees they brought really impressed Sara. “The kids at the refugee centers, he would play with them, because we thought ‘when’s the last time these kids played anything?’ ” says Sara. “He felt like that was something he could do; he could just play.”

Donations can be made to the Kurtzigs’ nonprofit Arizae Foundation, which gives 100 percent of proceeds to help the people of Ukraine. Tickets for a “Spirit of Ukraine” fundraising event are also available on the website. The event takes place on June 18 from 5–8 p.m. at the College of Marin’s James Dunn Theatre.