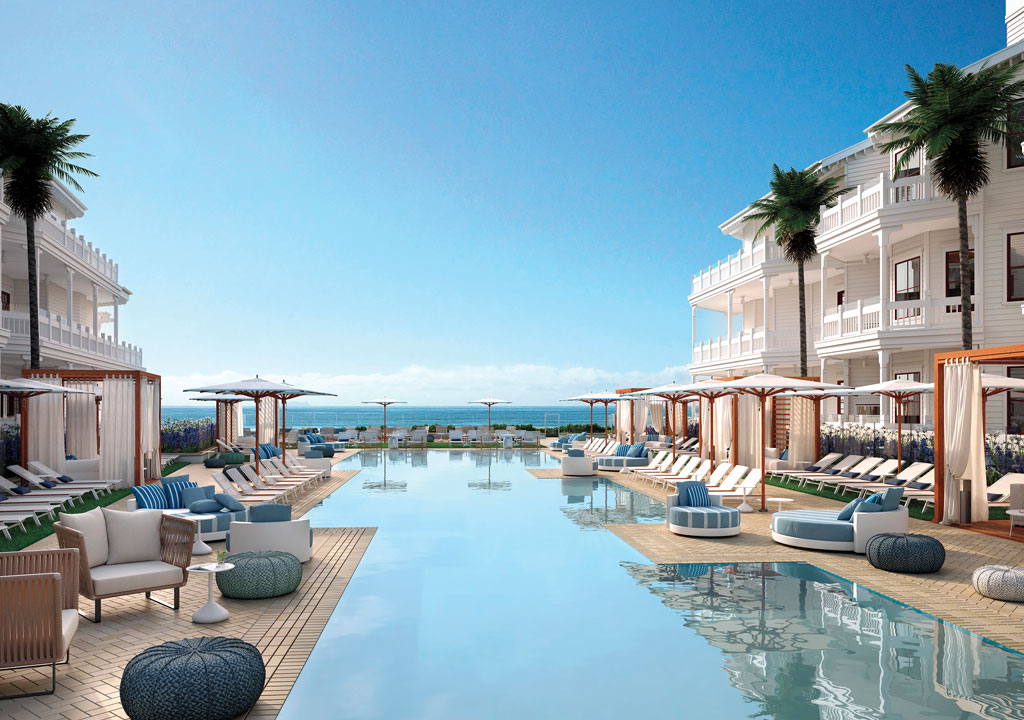 The 1915 Panama-California Exposition in Balboa Park put San Diego on the map as an international travel destination. In the 1920s, Hollywood stars started meandering down Highway 101 in search of laid-back fun in the sun in destinations like Oceanside, Del Mar, La Jolla and downtown San Diego. These tony beach towns and the city have renewed luster thanks to new and recently renovated luxury hotels and imaginative new restaurants and bars. Adding to the appeal, nearly every day in September warms to over 70 degrees and the month often boasts plenty of 80-degree days. September through November is considered transitional “shoulder season,” so there are fewer crowds than the busy summer travel season and far better deals on accommodations. Here’s where to go in San Diego to experience the golden era shimmer this fall.

La Valencia Hotel
La Jolla’s famed “Pink Lady,” the Spanish Revival–style La Valencia Hotel (from $519 per night) on the La Jolla coastline, debuted in 1926 and became a glamorous getaway for stars like Mary Pickford and Ginger Rogers. In the 1940s, the “La Jolla Playhouse era,” the hotel was a gathering place for the actors like Gregory Peck who performed at the famed summer theater. The hotel is in the midst of a 95th anniversary year filled with celebrations and exclusive experiences, such as a suite package that includes a cocktail butler who will serve in-room libations to order like the Gilded Icon cocktail featuring bourbon, Grand Marnier, Champagne and dehydrated Valencia orange. La Valencia’s signature restaurant, the Mediterranean Room, has unveiled a new design with bespoke furnishings, an enhanced ocean view and a new California-Mediterranean menu with subtle Mexican influences. We’re particularly excited that the hotel’s Whaling Bar, which counted Dr. Seuss, aka author Theodor Geisel, as a regular, is slated to make a return before the end of the year.

Shore House at The Del
Hotel del Coronado’s $400 million master plan reimagination will be considered complete when the posh Shore House at The Del (from $1,299 per night) opens in September. Located on the Coronado beachfront, Shore House features 75 seaside one-, two- and three-bedroom residences; a dedicated resort entrance with blond wood floors; an ocean-view pool and bar; a bistro; and an indoor-outdoor living room. As part of The Del’s major renovation and revitalization, architects have created five resort neighborhoods, including the more modern Cabanas where guest rooms have sunburst mirrors and terraces with fire pits and the Victorian (from $489 per night), the hotel’s original Queen Anne–style structure. Historic elements such as the grand lobby with ornate wooden wall paneling and front porch veranda, including the Queen Calafia stained glass window, have been restored. Book a room here should you feel inclined to channel your inner Hollywood starlet or leading man. The Marilyn Monroe and Tony Curtis flick Some Like It Hot was filmed at The Del in the 1950s.

Rancho Valencia Resort & Spa
Rancho Valencia (from $999 per night) may not be nearly a century old like La Valencia (many of the resort’s Spanish Colonial hacienda-style buildings were constructed in the 1980s), but it still recalls a bygone era. Southern California’s only Relais & Châteaux property — set in a Rancho Santa Fe canyon — was a eucalyptus farm in the early 1900s and the lush landscape with citrus groves and olive and palm trees is a glimpse into what SoCal looked like before there was so much development. Not one to rest on its laurels, Rancho Valencia renovated its spa in 2021. Additional spa treatment areas, including three state-of-the-art facial rooms, have tiled outdoor showers. Rancho Valencia also partnered with Doug Mansfield, the resort’s original architect, and Megan Hersch Studio MG Interiors on two expansive new villas available for guests including the four-bedroom Spa House and the five-bedroom Casa Valencia with Mexican-Moroccan design and a private pool.

Del Mar Beach Hotel
Del Mar’s only hotel on the beach reopened in June following a multimillion-dollar redesign. Del Mar Beach Hotel (from $399 per night) is a quintessential Southern California beachside hotel with a twist. The hotel has wooden plank floors and headboard murals depicting coastal scenes, but guests are welcomed with a glass of fine wine at check-in from the Cruvinet Wine Dispenser in the lobby and treated to scoops of artisanal gelato by An’s Hatmakers of Del Mar Plaza. All the best SoCal style living is on offer: beach cruisers for biking into Del Mar’s quaint village, sunset yoga sessions on the beach and fire pits for roasting s’mores.

A Stylish Guide to North County
Take Highway 101 north from San Diego and stop at these off-the-beaten-path spots.

Solana Beach, a town known for approachable surfing and the famed live music venue the Belly Up Tavern, is also where visitors will find some of San Diego’s best shopping, in the Cedros Design District. Pop into Solo, an industrial warehouse with eight women-owned boutiques under one roof for unique souvenirs, from 18th-century antiques to design books.

In Carlsbad head inland to Leo Carrillo Ranch Historic Park. Actor and conservationist Leo Carrillo, who played palamino-riding Pancho in The Cisco Kid and served on the California Beach and Parks Commission for 18 years, renovated the ranch and 19th-century hacienda located in a 27-acre canyon. Open to the public since the early 2000s, the area includes romantic handcrafted adobe buildings, antique windmills, a reflecting pool and citrus orchards. Be on the lookout for the colorful peacocks that live on the property.

With its art galleries, museums and surf culture, the community of Oceanside was designated one of the 14 inaugural Cultural Districts by the California Arts Council. Oceanside Museum of Art is housed in two buildings, including one designed by modernist master Irving Gill and a newer building by Frederick Fisher. OMA showcases fine art by California artists as well as rotating exhibitions. If you’d like to stay awhile, several new hotels have opened recently in Oceanside including the sister properties The Seabird and Mission Pacific Hotel, on the beachfront near Oceanside’s iconic wooden pier, and The Green Room, a bohemian-and-surf-inspired boutique hotel in a renovated 1950s motel.

Addison
The Michelin Guide began recognizing Southern California restaurants in 2019 and Addison, a restaurant on the grounds of the Fairmont Grand Del Mar, became the first San Diego restaurant to earn two Michelin stars last year. Chef William Bradley has championed California’s brand of gastronomy for over a decade. His respect for local ingredients, love of various cuisines and fine technique are on display in the nine-course tasting menu featuring dishes such as kanpachi sashimi with salted kiwi, shiso and melon and barbecued squab with red cabbage syrup, porcini and wild arugula.

Callie
San Diego native Travis Swikard gained an appreciation for the bright flavors of the Mediterranean while working as executive chef at French chef Daniel Boulud’s Boulud Sud in New York. After 10 years in New York, he moved back to San Diego to open his first solo project. Callie, which means “the most beautiful” in Greek, is a love letter to the flavors of Greece, Spain, Italy, Morocco and other Mediterranean countries, but it showcases the bounty of San Diego (San Diego County has more organic farms per capita than any other county in the U.S.). Dishes include uni toast with Ibérico ham, tomato bread and garlic aioli, and lemon saffron spaghetti with local king crab, uni and bottarga breadcrumbs.

Kingfisher
Kingfisher, a new Vietnamese restaurant in San Diego’s Golden Hill neighborhood, offers a touch of decadence in everything from the cuisine to the decor. The interior’s focal point is a 23-seat bar with a gilded art nouveau crown dangling from the ceiling. Large-format dishes conceived by executive chef Bautista, like the half smoked dry aged duck — which requires two weeks of chilled air-drying time — and wagyu smoked beef rib with beef-palm sugar glaze are absolute showstoppers, and cocktails like a mezcal margarita with papaya and black lava sea salt are a worthy accompaniment.

Part Time Lover
The design of Part Time Lover, a listening bar and record store in North Park that opened in June, is inspired by Frank Lloyd Wright’s East-meets-West Prairie School aesthetic. While working on the Imperial Hotel in Tokyo, Wright was heavily influenced by Japanese art and culture. Record collectors can spin their favorites in the space with clean, angular lines and plenty of warm wood (the custom chandelier is made out of eight oak framed triangles) or relax on a bar stool with a Japanese highball featuring a custom ice spear and listen to the analog tunes on the hi-fi sound system.