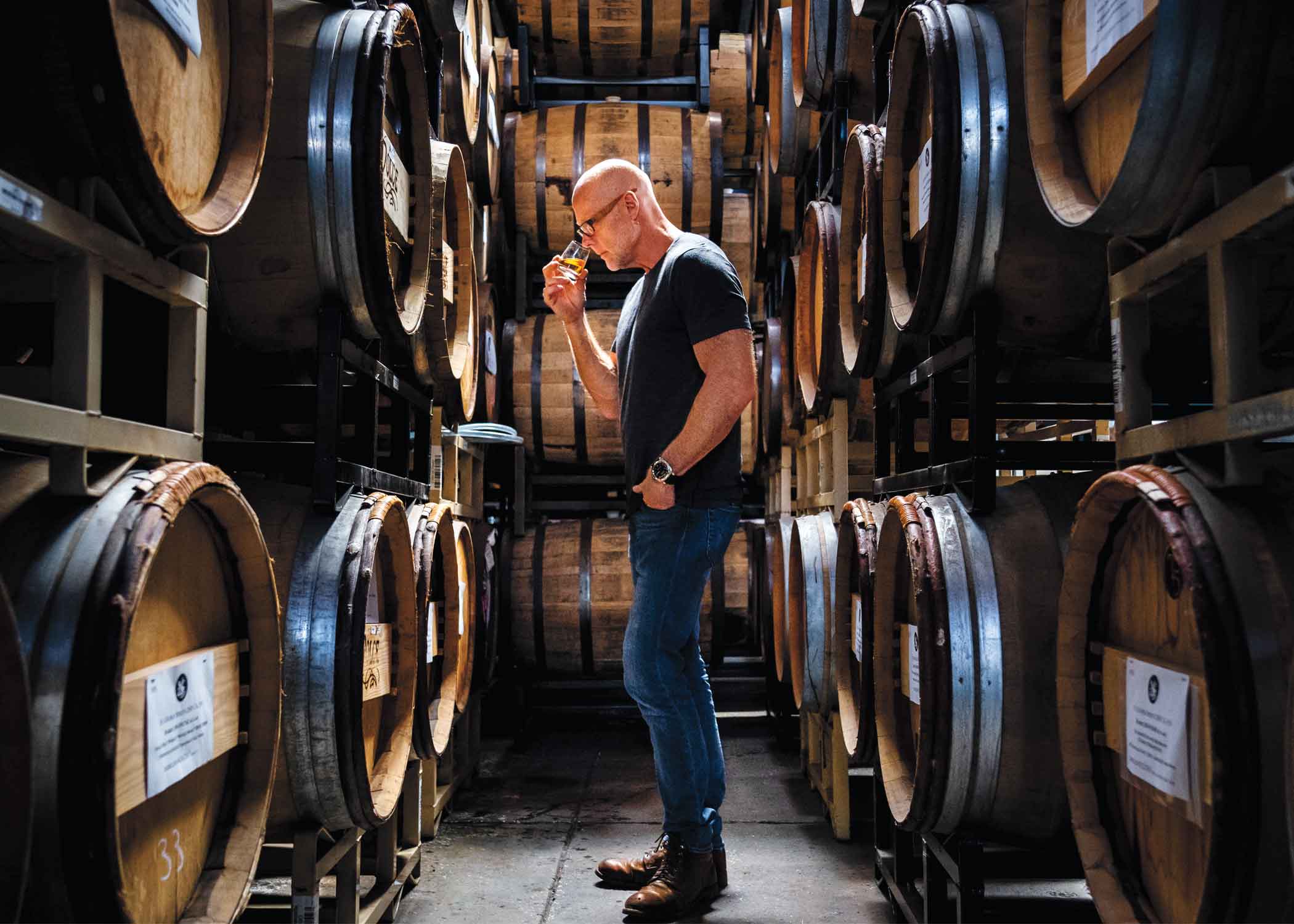 Alameda’s St. George Spirits was launched in 1982 by Jörg Rupf, a young judge who moved to UC Berkeley on assignment from Germany’s Ministry of Culture. Raised in the Black Forest, where distilling eau-de-vie (essentially brandy) is the stuff of life, Rupf quickly fell in love with Northern California’s nascent produce-rich culinary scene and began distilling pears, raspberries, cherries and even some experimental kiwi batches in his backyard. Then in 1996 an eager ex–nuclear engineer named Lance Winters knocked on his door. Disgruntled by a lack of joy in his career, Winters decided to switch lanes to pursue his distilling destiny after trying (and becoming enamored with) Lagavulin single malt.

“Jörg is a guy with amazingly exacting standards, which is really important if you’re going to be in this industry,” explains Winters of his early tutelage under Rupf. “It can’t just be something that fits the standard of the category and that’s good enough — you really have to knock it out of the park. And that’s what Jörg did for the first 15 years before me.”

Together they evolved St. George into a globally respected enterprise, and in 2004 the company moved into their current Alameda HQ located in some 65,000 square feet of a retired naval air base hangar. In 2010 Winters took over the master distiller mantle when Rupf retired, and went on to assemble a vibrant spectrum of spirits — everything from green chile vodka to bitter aperitivos, and from umeshu barrel-finished single malt whiskey to kombu seaweed distillate. In fact, St. George was the first to produce verte Absinthe in America when absinthe was fully legalized in 2007 because they’d already been distilling with wormwood for years (previously it was illegal to sell, not manufacture, real absinthe — a loophole Rupf and Winters took full advantage of).

“We employ a different point of view from other distillers: we look at categories as a conversation,” reveals Winters. “You don’t want to say what someone else has said. If I’m going to make a gin, the last thing I want to be known for is being the local version of Sipsmith — then all I’ve done is rip off Sipsmith, and I haven’t accomplished anything of my own.”

This hard-won philosophy bulwarks one of their most popular expressions: the aptly named Terroir Gin. Although it’s located in the East Bay, in St. George’s cabinet of spirits none mean as much to Winters as the one inspired by Marin County. The early muse struck one warm summer day when Winters drove high in the hills of Mount Tamalpais to pick up his son from camp. “Oh my god, this place smells amazing!” Winters recalls of the unexpected epiphany wafting in from his car window. “I really want to distill something that smells like this!”

Originally the idea was to make eau-de-vie, but the concoction quickly evolved into gin. He wistfully recalls the thick fragrance hanging in that hot Mount Tam air — the literal apex of Marin County, covered with bay laurel, wild fennel, Douglas fir and coastal sage. “Those are the notes that make up the heartstrings of that gin’s aroma,” he says, and describes how he wanted to capture the “forest floor earthiness.” Obviously unable to distill dirt, Winters namechecks a litany of ingredients he experimented with: orris and angelica roots for their earthy characteristics; orange and lemon peel for brightness; cinnamon for the dusty, sunbaked trails; wok-roasted coriander and, of course, juniper berries, which not only define gin, but also convey their own sense of landscape.

“When people ask me do I have a favorite spirit of all that we make — and this is really crazy because I got into distilling for whiskey —there’s something about the intentionality of composing a gin,” states Winters of his Terroir. “With a gin you start and stop based on what it is you desire, and it’s my favorite thing to drink.”

And his favorite way to drink his Terroir Gin, you might ask? “Oh that’s easy: neat in a martini,” he says with a chuckle. “And I’ll go out to West Marin to Tomales Bay and get some oysters. And I will sit on the beach and drink that gin with oysters, and I’ll do it as long as the oysters hold out … and as long as the gin stays cold. And that to me is the perfect day.”

Stir all ingredients with ice in a mixing glass, then strain into a chilled coupe. Float a sage leaf on top to garnish.