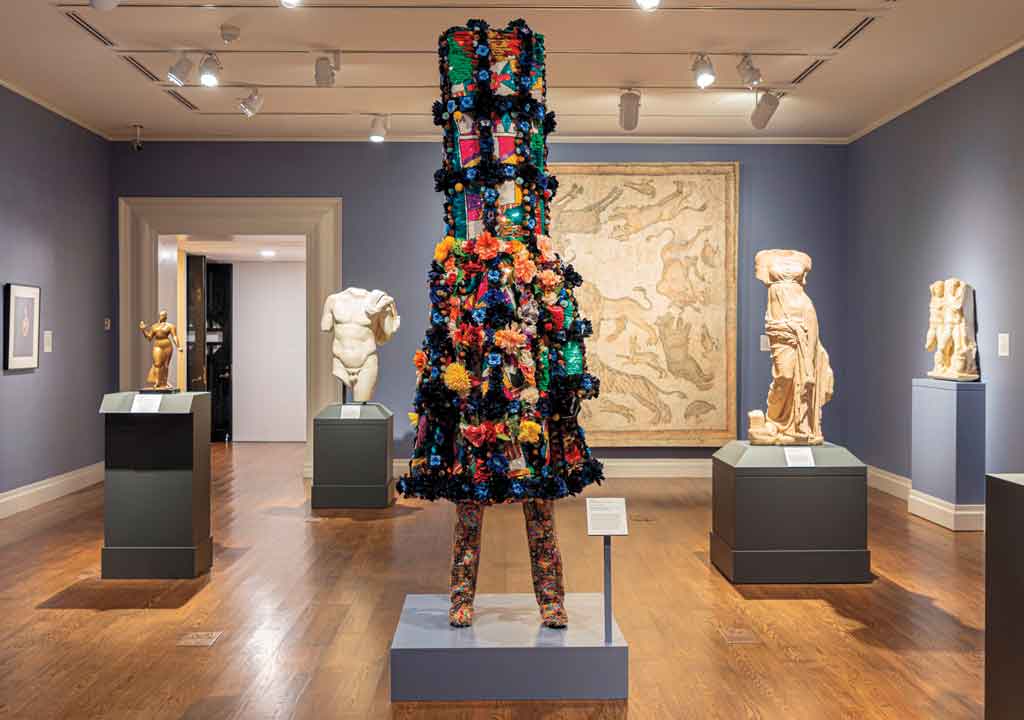 Courtesy of Honolulu Museum of Art
by Casey Hatfield-Chiotti

Mainlanders go to Hawaii in search of sun and fun, but there is more to the Hawaiian Islands than palm trees swaying in the breeze and turquoise waters, says Allison Wong, director of partnerships for the arts organization Hawaii Contemporary and the Hawaii Triennial 2022, this year’s rendition of a multisite public art exhibition that occurs every three years.

“There’s a rich cultural heritage that is shining through here, and people coming from the continent to Hawaii should want to understand and be knowledgeable about this culture. It’s not just kitschy shops selling cliché merchandise in Waikiki,” she says. HT 2022 is mostly wrapping up May 8, but one poignant exhibition that features Native Hawaiian and local artists will continue through December 5 at the free Hawaii State Art Museum. Two galleries are displaying the photography, print, literature and film of Hawaiian artists from as early as the 1970s. There are dozens of museums and other sites to explore to give you a deeper understanding of Hawaii’s past and present, from the only official royal residence in the U.S. to an edgy neighborhood where industrial buildings are covered with colorful murals by local and international artists.

“A living museum,” says Wong, Iolani Palace was built by King Kalakaua in 1882 in Honolulu. The palace served as the capitol building after the monarchy was overthrown in 1893 — Queen Liliuokalani was even imprisoned there following an unsuccessful attempt to restore her to power in 1895. Visitors have been able to see all the trappings of Hawaiian royal life since the palace was turned into a museum in 1978, from pieces of jewelry made for the royal family, like a diamond butterfly brooch, to opulent royal gowns and uniforms as well as diplomatic gifts, furniture and original artwork. On the new White Glove Tour (from $99.95 a person) guests can get up close to items that aren’t on display to the general public.

It’s impossible to see everything at the Bernice Pauahi Bishop Museum, named for the Hawaiian princess and last direct descendant of the Royal House of Kamehameha and dubbed Hawaii’s Louvre, in a single visit. The state’s largest museum is devoted to natural history and culture and houses the largest number of Polynesian cultural artifacts in the world and an impressive collection of more than 13.5 million insects. The museum is located in a 19th-century building in Honolulu’s historic Kalihi district, and it’s grand, three-story-tall Hawaiian Hall is a highlight.

Shangri La and the Honolulu Museum of Art

Tobacco heiress and philanthropist Doris Duke built Shangri La as her Honolulu home on a bluff overlooking the Pacific Ocean in 1937 and filled it with ornate wall hangings, stained-glass windows and marble mosaics collected during her honeymoon travels through North Africa and West and South Asia. A museum since 2002, it reopened in October following a renovation. Guests can explore a new gallery showcasing items from Iran’s Qajar Empire, including colorful ceramics, fine jewelry and elaborate metalwork, as well as Duke’s Taj Mahal–inspired bedroom and the meticulously kept gardens. You are sure to come away with a greater appreciation for the beauty and intricacy of Islamic art and architecture just as Duke did during her travels. Tours begin at the Honolulu Museum of Art and include same-day admission to the museum (reservations are required). The collection includes everything from Hawaiian flag quilts to stylized Maui landscapes by Georgia O’Keeffe. Starting this September, a floral installation celebrating Hawaii’s deep connection to flowers will flow through two light-filled galleries.

The industrial Honolulu neighborhood Kakaako has dozens of large murals by contemporary artists. Most have been painted during POW! WOW!, an annual celebration of accessible art that was founded in 2010, like Hawaii artist Nanea Lum’s Hawaiian goddesses mural on the wall outside Fisher Hawaii. Make sure to stop by SALT, a city block filled with restaurants, shops and tasting rooms that pays homage to the neighborhood’s history as a fishing village and salt pond area.

The Best Hotels for Art and Culture Enthusiasts

Check into one of these stylish stays for a dose of art, culture and history.

Halekulani (from $635 per night), a luxury hotel in Honolulu, has an expertly curated fine art collection on par with a museum, including works by buzzy artists like Honolulu-based sculptor and painter John Tanji Koga. The hotel’s sister property, Halepuna Waikiki by Halekulani (from $399 per night), also showcases the works of several Hawaiian and other nationally known artists. Guests receive complimentary admission to the Bishop Museum and Honolulu Museum of Art.

King Kamehameha’s Kona Beach Hotel (from $509 per night) in Kailua-Kona, Hawaii, encompasses the land where King Kamehameha the Great governed after uniting all the Hawaiian Islands under his rule. Native artist and historian Herb Kawainui Kane’s work is featured in a dedicated gallery and throughout the hotel and includes a mural of Kamehameha in the lobby.

The Grand Wailea, A Waldorf Astoria Resort (from $1,348 per night) on Maui’s south shore shows that family-friendly stays can also be thought provoking with 81 museum-quality art pieces, including sculptures created by contemporary artist Fernando Botero. The hotel also provides opportunities for guests to learn about local culture through experiences like coconut weaving or tours with cultural ambassadors.

Sensei Lanai, A Four Seasons Resort (from $1,020 per night) in Lanai City has outdoor art installations by internationally known sculptors as well as contemporary artwork by David Ellis, Miya Ando and more. In its two-story domed Lanai Observatory, cultural advisers share how Native Hawaiians and people of the Pacific used celestial bodies and the natural environment to find their way on the ocean (it is thought that voyages between Hawaii and the South Pacific occurred as early as A.D. 400) and guide guests on a tour of the night sky using the observatory telescope. Future plans include eventual programming with Imiloa Astronomy Center of Hawaii, a museum with a planetarium on the Big Island.