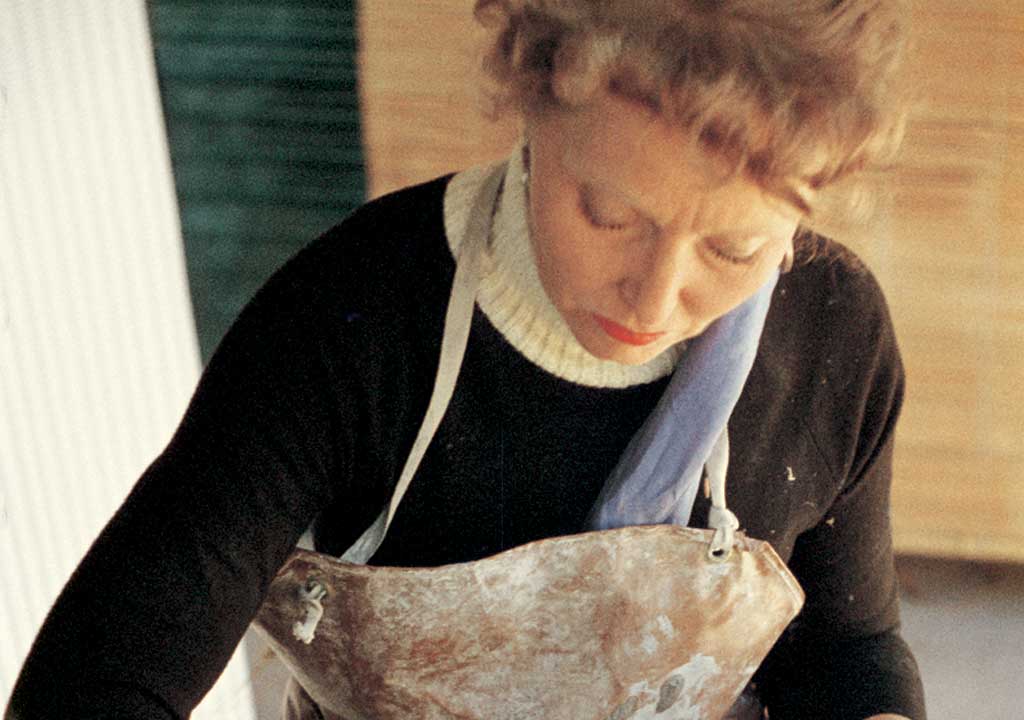 Visitors to the new Oakland Museum of California (OMCA) exhibit, which runs through October, will likely be surprised to discover what a true revolutionary and visionary Edith Heath was. She broke established norms of what dinnerware could be and alienated those in her own arts community as she pursued automation, all in pursuit of bringing to life a new, more modern version of the California aesthetic and placing it on dinner tables around the country.

“Her work can be appreciated from an artistic point of view, a design point of view and a function point of view,” says OMCA curator of photography and visual culture Drew Johnson, who organized the exhibit with guest curator and Edith Heath expert Jennifer Volland.

“I think one of the things that makes her a perfect fit for the Oakland Museum is the way her pieces reflect social trends that are peculiarly Californian such as the postwar focus on indoor-outdoor lifestyle and domestic life in general,” Johnson says, pointing out that Heath Ceramics have been on display at OMCA in one way or another since the museum opened in 1969.

But before Edith Heath could accomplish anything she had to learn what she didn’t like — and that started as soon as she began taking ceramics classes at the California School of Fine Arts (now the S.F. Art Institute) after she and her husband, Brian, moved to California.

“They used this gutless white clay; it was just this basic stuff that she didn’t relate to and didn’t feel could be used to accomplish what she hoped to accomplish,” Johnson says, adding that what she did find useful was a ceramics chemistry class taught through UC Berkeley Extension.

She and Brian soon began exploring the Sierra foothills, taking buckets with them to gather clay samples, knowing that they would have to find a large source of uniquely Californian clay if they were to one day start mass production. This led them to the Lincoln clay pit where much of the material for Heath Ceramics was eventually sourced. “I think that came naturally to both her and Brian; they loved the landscape,” Johnson says. “And being so familiar with the fundamentals of geology, they loved taking road trips into the mountains.”

“She was trying to get away from the formality of white china,” Volland says. “Her dinnerware was more of the earth; it has a more natural feel and was more organic.”

Edith’s innovative designs and use of alternate materials eventually landed her a 1944 exhibit at the Legion of Honor, where her handmade pieces were discovered by the retailer Gump’s. “That show was huge, being recognized in that way. Edith got into ceramics later in life and being discovered by Gump’s was life-changing,” Volland says. “It shows this very rapid rise that her career took, because this was all just in a matter of years — a shorter time than it would take anyone to even master ceramics, much less get a show.”

With an investment by Gump’s and later large orders placed by the N.S. Gustin Co., the couple was able to open Heath Ceramics in Sausalito in 1948, shipping some 100,000 pieces by the next year.

A factory, designed by Edith and the firm Marquis & Stoller, was completed in 1959. “Heath used to be in all the smaller retail stores in different cities. They had hundreds of accounts all over the country and in Canada, too,” Volland says. “It would be in stores with Eames and other midcentury product designers that were of the same vein and helping to contribute to that lifestyle.”

Soon the Heath Ceramics factory was being filled with kilns, jiggers and other equipment to be able to automate the process and produce the quantities that were being requested. Much of the work of automating the factory was done by Brian — who famously converted a sewing machine into a pottery wheel for Edith and became the factory’s de facto engineer.

Although the ceramics and pottery community essentially turned its back on Edith when she automated, that didn’t bother the entrepreneur one bit. “Her feeling was that there were plenty of junky things made by hand, and plenty of beautiful things made by machine production,” Volland says. “To her, it was anachronistic to live in the 20th century and not use the tools that were available.”

In a scene that feels like history repeating, the Marin-based husband-and-wife team of Catherine Bailey and Robin Petravic bought Heath Ceramics and the still functioning but aging factory in 2003 with the mission to upgrade it and continue to bring its products to the world. “It was a lot like an archaeological dig, and for years we would find things that were informative, buried treasures in various nooks and crannies in this building. That’s how we got to know Brian and Edith and what drove them,” Bailey says. “They were inventive, passionate, intuitive and did things with purpose — though also with a humility and integrity that belied
their modest roots.”

Volland says the Edith Heath story can best be summarized by an anecdote about an interaction between Edith, who passed away in 2005, and former New York MoMA curator Edgar Kaufmann. “You’re a classic,” Kaufmann said, to which Edith responded by saying that it was too early in her young career for that phrase to be used. “Mark my word,” Kaufmann replied: “from this day forward all dinnerware will be measured against what you’ve created.”