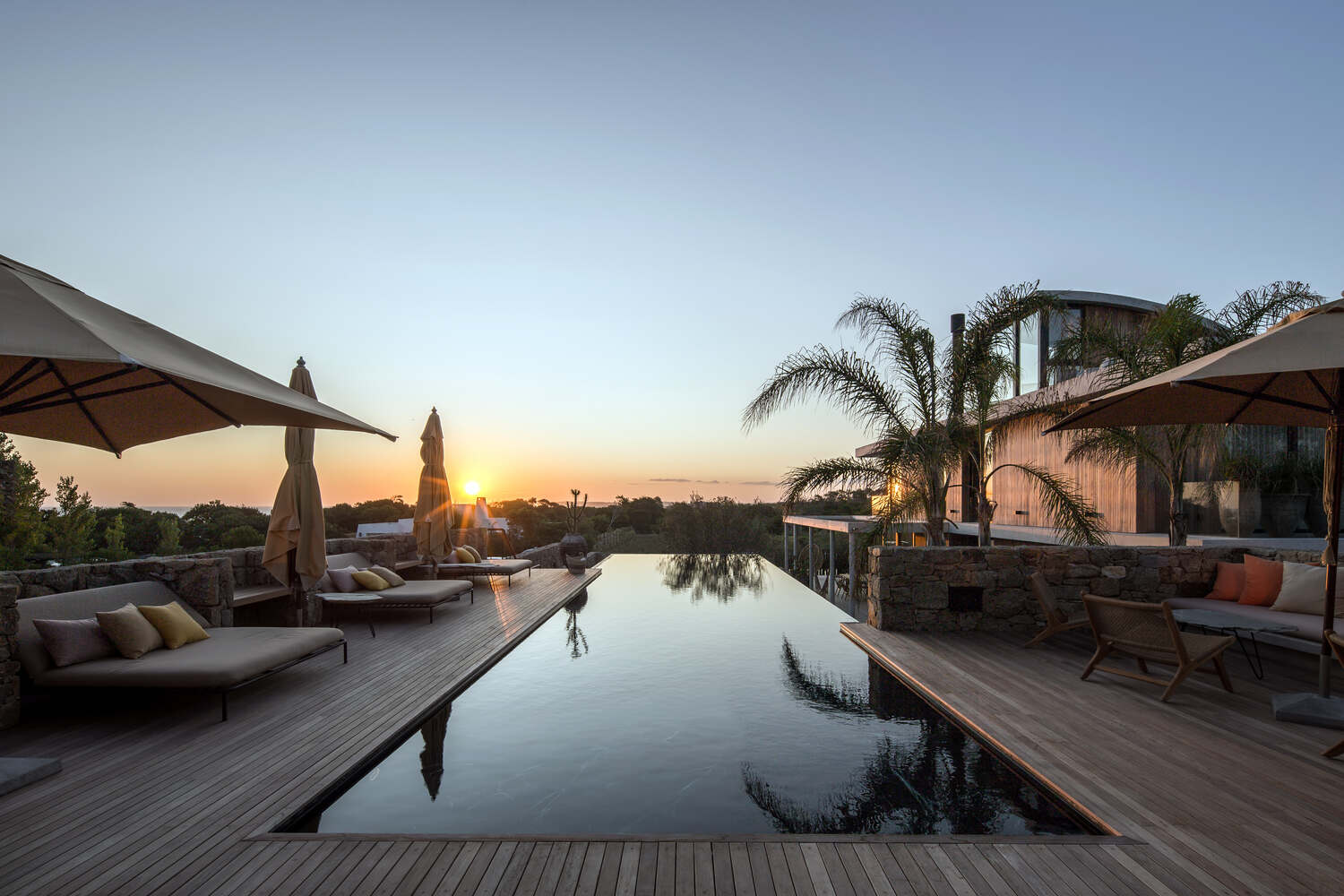 The last year may be forever known as the year of “revenge travel,” when vacationers with a pent-up desire to see the world made up for lost time. We’re hoping the will to get away doesn’t fade away in 2023 but becomes a little less, shall we say, frenzied. In the coming year we plan to travel slower, with more intention, and get back to traveling for the pure joy that comes with expanding horizons and learning something new. Here are five destinations that are sure to put a smile on your face and leave an impact long after you’ve returned home.

When the Southern Hemisphere summer hits, well-heeled Brazilians and Argentines know there’s no better place to be than the Uruguayan coastline. Not only does it have soft sand beaches and warm water, it also offers a sophisticated getaway with delicious fire-grilled cuisine, intriguing architecture and world-class art. The Uruguayan contemporary art scene got a major boon when James Turrell’s Ta Khut Skyspace debuted at the 17-room Posada Ayana (from $450 per night) hotel in José Ignacio in late 2021. The hotel’s Viennese owners worked with Turrell for more than two years to build the first freestanding Skyspace in South America. The temple-like structure is made of 42,000 kilograms of pure white marble from South Tyrol and clad in earth and grass with entrances to the dome on both sides.

José Ignacio, which is about an hour drive from the international airport in Punta del Este, was once a sleepy fishing village, but that began to change when Francis Mallman opened his first restaurant, Posada del Mar, there in the ’70s. A boho travel set followed and today adventurers have a range of chic boutique hotels to choose from, like the modernist masterpiece Playa Vik (from $1,380), perched on the dunes above La Mansa Beach and designed by Uruguayan architect Carlos Ott. While Posada del Mar is no more, Mallman opened the beachfront grill Chiringuito in José Ignacio in 2021, and no visit to the peninsula is complete without dining at Parador La Huella, an oceanfront restaurant that epitomizes José Ignacio’s rustic glamour.

Art-loving travelers should also head 30 minutes inland to Garzon, a pueblo that has become a renowned destination for viewing art. Galleries surround a main town square, and the Garzon-based creative institute CAMPO hosts more than 25 international and local artists during Artfest each year. The two-day-long public event takes place December 28 and 29 and includes site-specific installations, performances, live music and artist talks. Danish chef Mads Refslund, co-founding chef of Noma, will return as guest chef for the annual benefit dinner. CAMPO also has residency programs and creative collaborations throughout the year. Mallman fans should also check out his Hotel and Restaurant Garzon (from $870 per night), located in a brick building that used to be the town’s general store, for a meal of buttery octopus in chili oil and grilled strip steak on the brick patio beneath the stars.

Where the Old West Is New
Jackson Hole, Wyoming

Jackson Hole is beloved for wilderness access — it’s the gateway to Grand Teton National Park and the National Elk Refuge — and its Old West vibe, and there are reasons to enjoy both on a trip in 2023. In September, officials paved the way for Teton County and the town of Jackson and Jackson Hole Mountain Resort to become eligible for International Dark Sky Community designation, which will help protect wildlife and the region’s glittery night sky for years to come. Jackson Hole’s best hotels are already surrounded by pristine natural beauty year-round. Amangani (from $1,440), part of an over-the-top 14-night journey new for 2023 called Aman Jet Expeditions: Adventures in the Americas, is set amid snowcapped mountains 20 minutes from Teton Village.

Amangani offers a range of winter activities like dogsled tours, winter wildlife excursions and snowshoeing in the national park and has its own ski lounge at the base of the Bridger Gondola. At the luxe Caldera House (from $1,700 per night), guests can roll out of bed and onto the mountain. The all-suite hotel is just steps from the Jackson Hole Mountain Resort tram, and the four-bedroom Valles suite with vaulted ceilings and a modern fireplace is the most elegant of family-friendly accommodations.

In town, new and recently updated hotels are bringing a fresh take on the Western aesthetic. The Mountain Modern hotel (from $300 per night) has added 59 rooms featuring pops of red buffalo plaid as well as custom open closets, perfect for storing ski gear, and an outdoor pool and Jacuzzi, a new restaurant and an outdoor gathering space with fire pits. The Virginian Lodge (from $149) is a retrofitted modern motor lodge with midcentury-inspired rooms with Western touches like Pendleton blankets. The Virginian Saloon serves up stiff drinks and diner-style fare and boasts a legendary karaoke night. The Cloudveil, Autograph Collection (from $499 per night) opened in 2021 and is a modern sanctuary with 100 rooms and suites and a rooftop terrace overlooking Jackson’s Town Square and Snow King Mountain. The team behind the Old West–inspired Anvil Hotel — where guest rooms have custom iron beds and handmade brass fixtures — debuted a high-design hostel called the Cache House (from $82 per night) in 2019. The Anvil’s rustic Italian restaurant Glorietta serves wood-fired pizzas, handmade pasta and seasonal cocktails, exactly what you’ll crave after a day skiing or snowboarding Jackson Hole’s steep and deep terrain.

Ireland’s Golden Vale, located two hours southwest of Dublin in County Tipperary, is a popular daytrip because of its remarkably well-preserved medieval ruins known as the Rock of Cashel, but now there’s a reason to stay longer. Cashel Palace Hotel (from $281 per night) opened just below the Rock — the fortress and cathedral on a limestone outcropping dates to the 12th century — in March 2022. The Magnier family, who made their fortune in horse breeding and racing, purchased the property and oversaw a renovation that included restoring the historic brick manor and gatehouse and adding more modern wings and a state-of-the-art spa. The glass-enclosed swimming pool overlooks restored gardens with mulberry trees planted in the early 1700s by order of Queen Anne. Particularly festive during the holidays, the entrance hall this winter will be decorated with towering spruce trees and guests will be treated to caroling and mulled wine.

The hotel, which has roaring fireplaces and gold-framed equestrian art, also has an equine concierge who can arrange a multitude of equestrian activities from touring the Magniers’ famed Coolmore Stud farm to riding at family-owned Crossogue Equestrian Center. Tipperary and County Kildare have been officially dubbed Thoroughbred County through a partnership between local tourism boards and the thoroughbred industry and will be offering many equestrian adventures in 2023 including an interactive exhibition in Fethard. Visitors to Tipperary can also walk along the River Suir and admire the 13th-century Cahir Castle, book a tasting at Cashel Farmhouse Cheesemakers, which makes Ireland’s only sheep’s milk blue cheese, and visit the Rossa Pottery workshop.

A French Fantasyland Gets an Upgrade
Loire Valley, France

France’s Loire Valley was a popular refuge for French nobility for centuries. Thanks to a flurry of hotel openings and the STARZ show The Serpent Queen — about the life of Catherine de Medici and filmed on location — new attention is being paid to the UNESCO-protected valley. The Fleur de Loire (from $269 per night) opened in June on the banks of the Loire River in Blois. Guests who check into the 44-room Relais & Châteaux can indulge in a spa treatment at the Sisley Spa, swim in an infinity-edge swimming pool with views of the historic city and dine on Michelin star–worthy cuisine. The project is the lifelong dream of two-Michelin-starred chef Christophe Hay and a true culinary destination with Hay’s namesake restaurant, which serves Loire fish and heirloom vegetables in artfully composed dishes, as well as the more casual Amour Blanc and a patisserie where pastries are served out of a gold and marble kiosk.

Le Bois des Chambres (from $142 per night), the first hotel at Domain Chaumont-sur-Loire, also opened earlier this year. Architect Patrick Bouchain designed the property with 39 rooms and suites divided between a restored farmhouse and a new building. The château and spa hotel La Borde en Sologne (from $216 per night) opened in October between Chambord and Cheverny in the small village of Vernou-en-Solonge. Offering 35 rooms and suites, the hotel has sculpted walls and ceilings, wooden frescoes, fireplaces and grand gallery that are stately yet modern.

Renowned French interior designer Jacques Garcia brought his trademark flair for drama to the new Château de la Vallière (from $343), only a few minutes from Tours and Amboise. The five-star hotel was the childhood home of Louise de la Vallière, Louis XIV’s first official mistress, and Garcia took inspiration from her life and the château’s great bones to create the whimsical and exclusive destination. This boutique hotel has just 20 rooms and suites, a spa and a gourmet restaurant with a menu created by superstar chef Yannick Alleno.

Where Wellness Is a Way of Life
Kyoto, Japan

Reopened to travelers since October, Japan, with its enticing history, cuisine and wellness-centric culture, is once again accessible. The best place to experience it all is in the country’s ancient imperial capital, Kyoto, where several new hotels debuted in 2019.
The goal of the green tea–perfumed spa at Aman Kyoto ($1,625), secluded in a 72-acre forest, is to promote holistic wellness. In the city, locals make frequent visits to temples — there are more than 1,600 in Kyoto — and to teahouses and spring-fed onsen. Aman’s indoor and outdoor onsen offer guests purification and cleansing. The extensive spa menu includes treatments ranging from a 16th-century foot bath using local sake and sea salt to reduce inflammation to an indulgent 24-karat gold leaf facial.

Across town, Park Hyatt Kyoto (from $874) also opened in 2019, in a traditional garden next to Kodai-ji Temple. Architects restored a 142-year-old kaiseki restaurant and teahouse where feudal lords once met and added a contemporary 70-room hotel inspired by low-slung Japanese guesthouses. While it isn’t particularly new, getting to Hoshinoya Kyoto (from $930 per night), a luxury ryokan on the banks of the Katsura River, is a meditative experience. It’s accessible only by boat, and the ride is peaceful and calming — guests hear the wind whistling through the valley and the rustle of trees while meandering down the river.

Travelers looking for something a little livelier should book a room at the retro East-meets-West Ace Hotel Kyoto (from $145), which also opened in 2019. Designed by Kengo Kuma, the hotel will be an especially sought-after reservation when chef René Redzepi and Noma set up shop in its main restaurant in the spring. Noma Kyoto will be open from March 15 to May 20 when Kyoto’s famed cherry blossoms are in bloom.